If you've been wondering when is Chinese New Year and worrying about your preparations, panic not.

Much like Easter in the Christian faith, the date changes according to the traditional Chinese calendar. This can make it difficult to keep track.

Also like Easter, the day is one of huge significance for many millions of people around the world. Often celebrated in spectacular style, Chinese New Year is a fascinating blend between cultural and religious elements.

As a result, knowing when the celebrations start and what they signify is incredibly important. 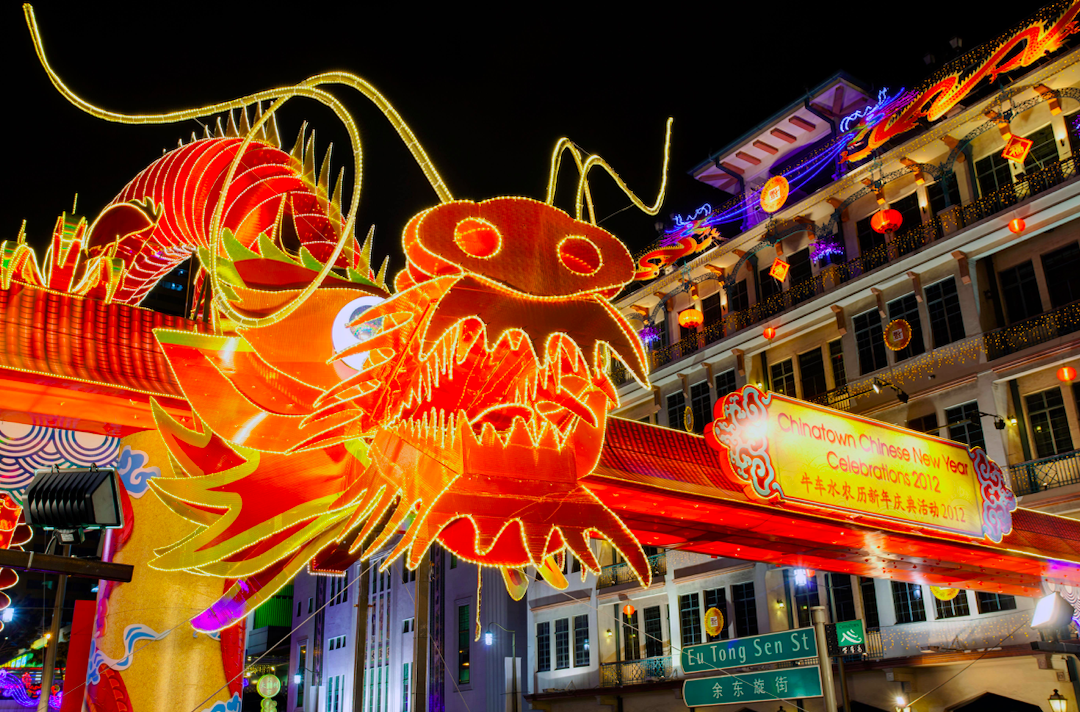 When is Chinese New Year?

In 2021, the festivities are set to begin today, February 12. This will mark the start of the Year of the Ox, according to the Chinese zodiac.

READ MORE: 9 best dumplings from around the world - from traditional Chinese to fried gyoza

Of course, with so much uncertainty still in the air, it seems likely that celebrations may have to be slightly more muted than normal. Nevertheless, there are still plenty of ways to get into the festive spirit.

To help you usher in the New Year as deliciously as possible, here is a delicious selection of nine traditional dishes.

Each of these foods is said to help bring luck and prosperity over the coming months. They also happen to be seriously tasty. 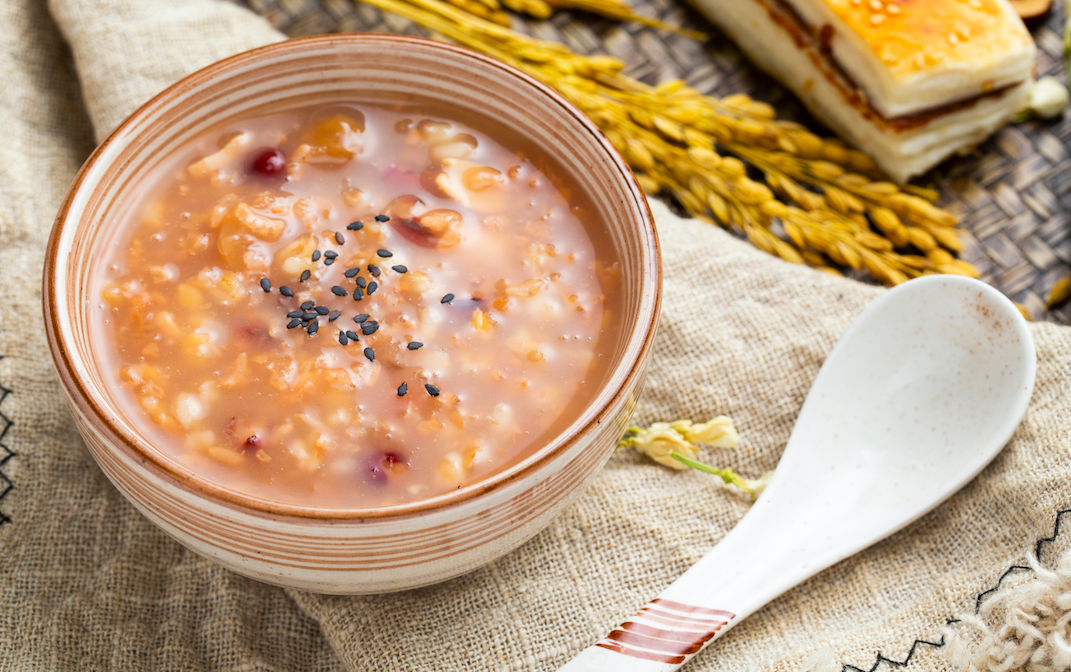 Congee can come in many different flavours (Credit: Alamy/Imaginechina Ltd)

According to the Laba tradition, this particular type of rich, glutinous rice porridge should be eaten on the eighth day of the twelfth lunar month. This is significant as the number eight brings prosperity, according to Chinese tradition.

All this makes laba congee is the perfect precursor to the main event. Often flavoured with peanuts and dried fruit, this particular congee is as tasty as it is traditional. 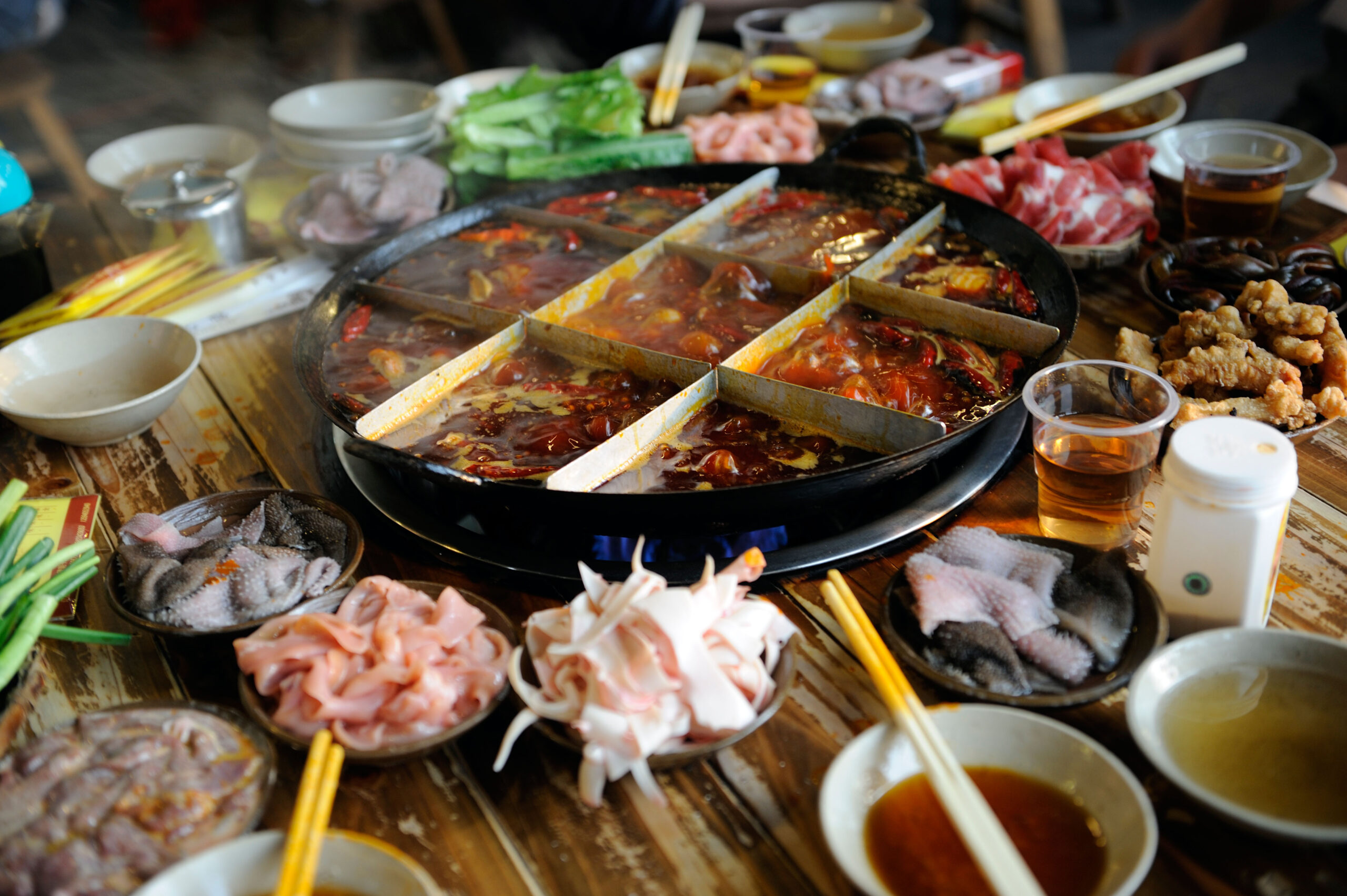 Hot pot is one of the most instantly recognisable dishes in China. These steaming vats of broth have formed the centrepiece of traditional New Year feasts for centuries and are designed to be eaten communally.

Although ingredients can vary enormously by region, hot pots typically involve raw meats, vegetables and seafood. These are then cooked in a communal pot by the diners themselves. The dish also often includes extras such as noodles, which are said to signify luck and long life. 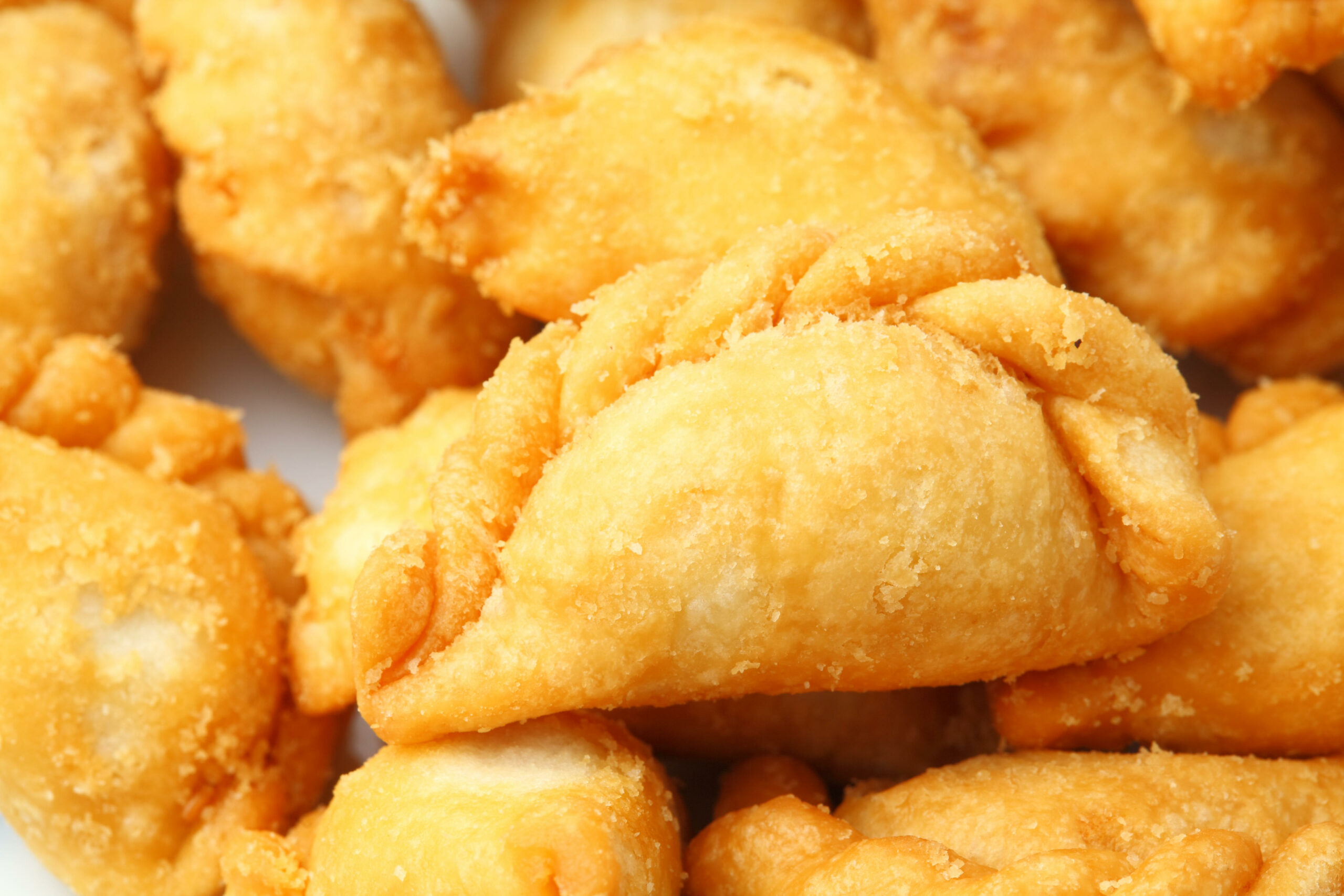 Typically eaten as part of Cantonese New Year festivities, Jau Gok is one of many foods said to resemble money. These crimped dumplings are designed to look like ancient forms of currency, such as sycee.

As a result, eating Jau Gok at New Year is said to bring prosperity over the coming months. 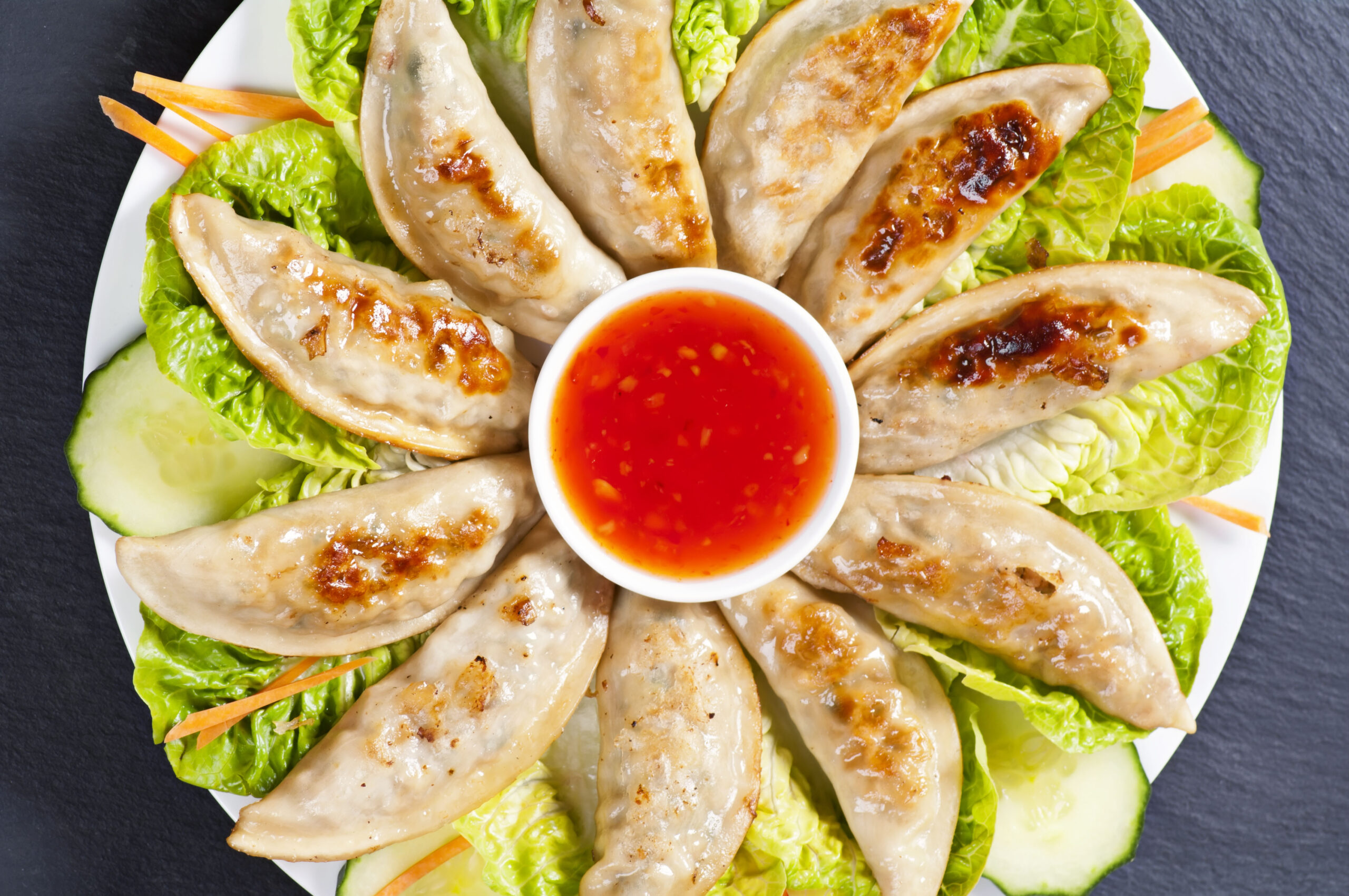 Much like their Cantonese contemporaries, Jiaozi dumplings are also remarkably similar in appearance to sycee currency. Believed to have been invented nearly 2000 years ago, these savoury treats are now a key component in Chinese dim sum.

The dumplings themselves can be filled and cooked in a variety of ways. Whether you enjoy them boiled, steamed, fried or in a soup, Jiaozi are one of Chinese cuisines most instantly recognisable and delicious dishes. 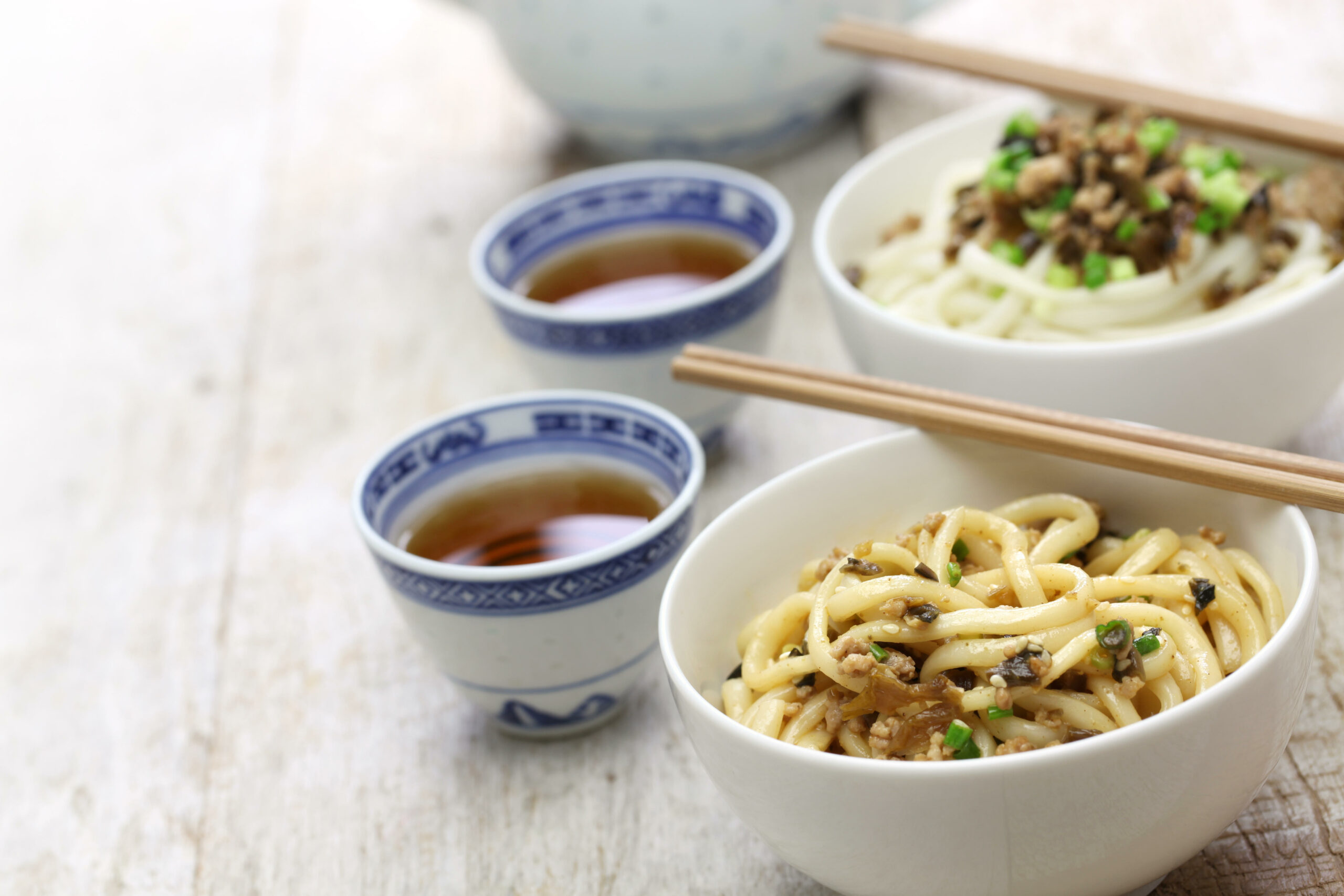 Noodles have a hugely symbolic role all across Asia, and China is no different. At New Year, tradition dictates that families eat and prepare long, uncut noodles as part of their meal.

The thought is that the length of the noodles indicates prosperity and long life for the diners. No wonder that it remains such a popular part of Chinese New Year tradition. 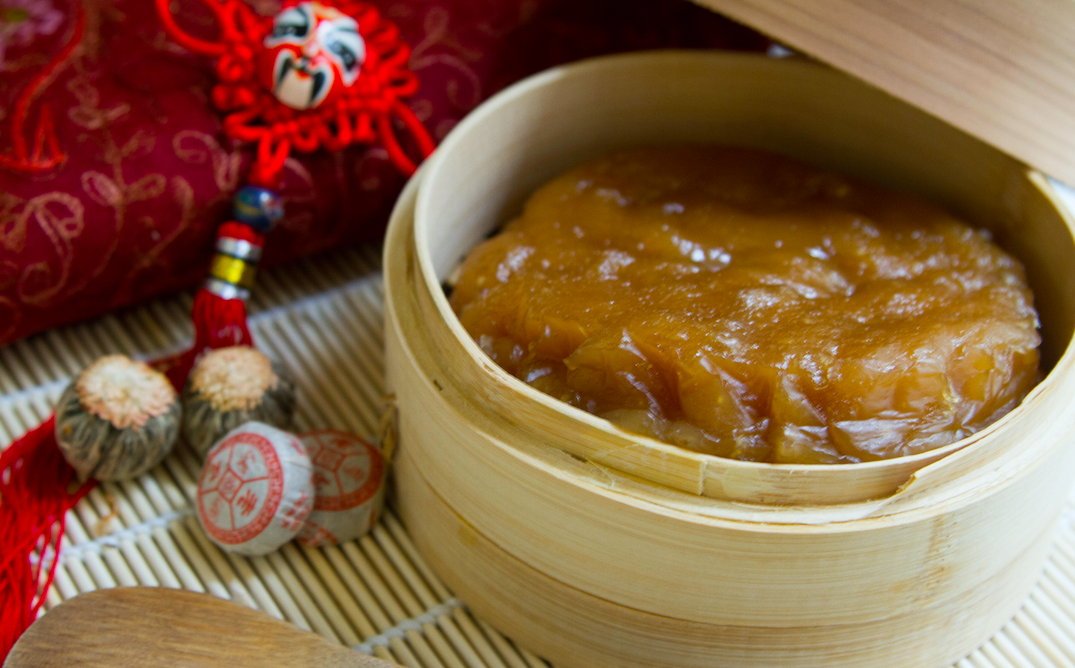 Nian Gao, or Chinese New Year Cake, highlights just how important language can be in Chinese food culture. These baked rice flour sweets are actually eaten at New Year because Nian Gao is a Chinese homonym for "higher year".

The linguistic link means that Nian Gao is a popular feature at New Year's dinner tables. The cakes are also often made as an offering to "the Kitchen God" to being luck over the coming year. 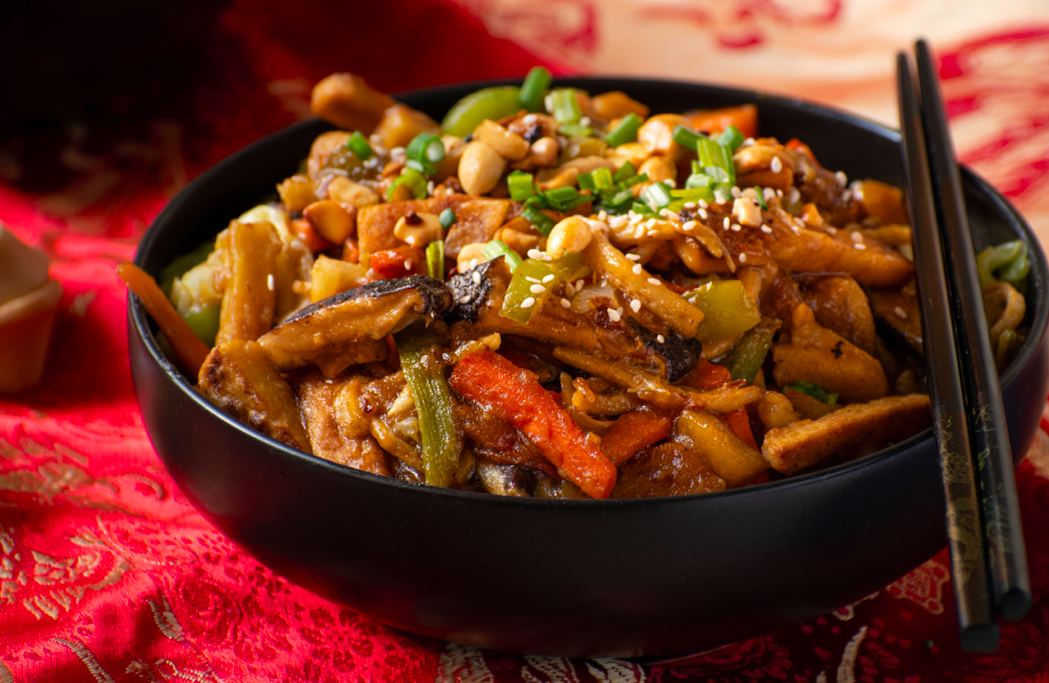 Also known as Buddha's Delight, these complex vegetarian bowls have become a popular fixture on Chinese menus around the world.

The dish traditionally features a variety of fresh vegetables and mushrooms and is usually free from eggs, meat and seafood. Each of the ingredients, such as arrowhead, bamboo or mushrooms has particular auspicious significance.

Historically enjoyed by Buddhist monks, Jai is now very much on the menu for everyone. 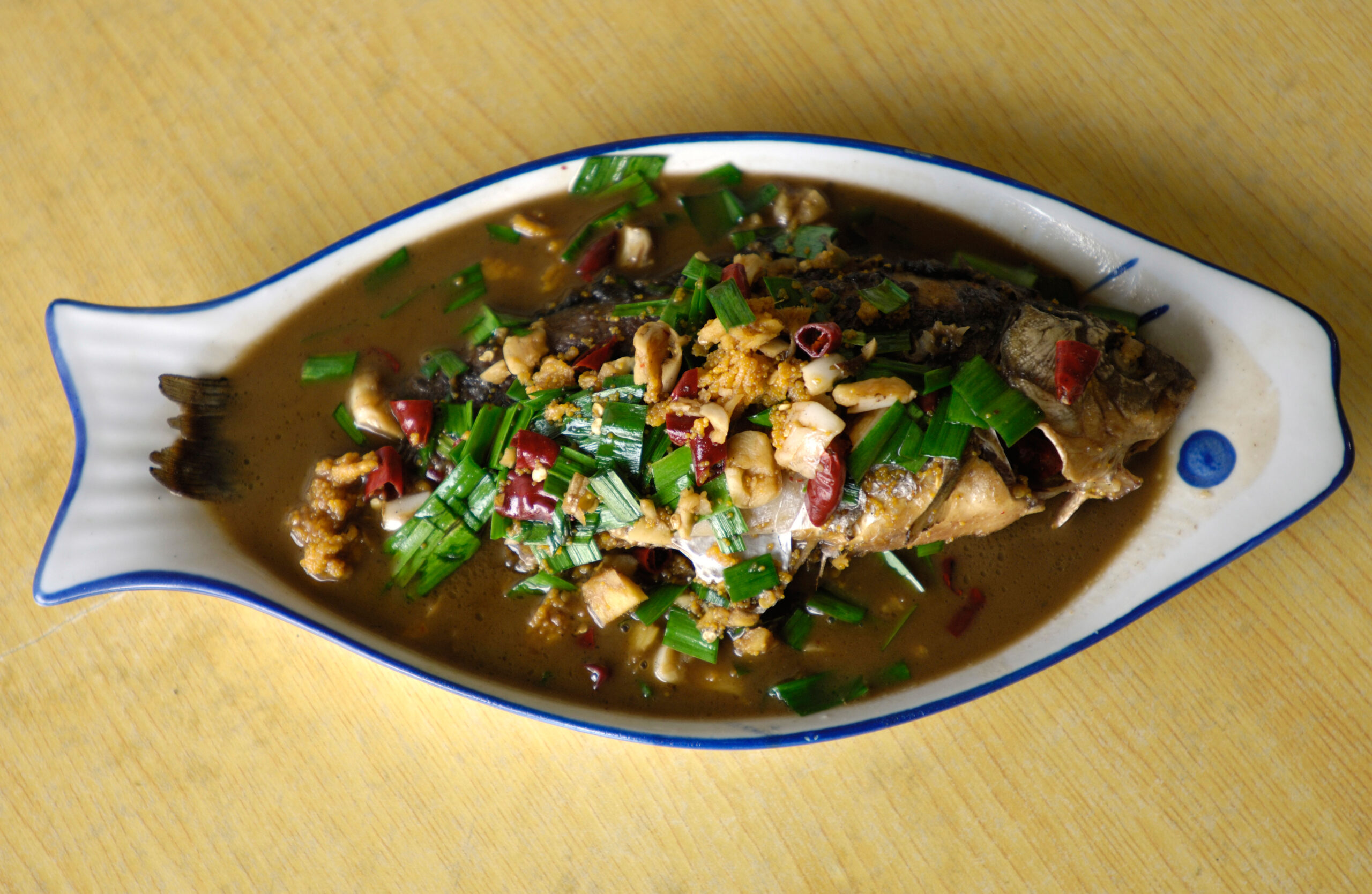 The word for fish is very similar to the word for plenty in Chinese (Credit: Alamy/Lou-Foto)

Like Nian Gao, fish is another New Year menu fixture that owes its status to linguistics. Its Chinese pronunciation, "Yú", is a homophone for the phrase "surpluses", making it an appropriate way to wish for a year of plenty.

As such a ubiquitous ingredient, there are literally hundreds of ways to prepare fish for a New Year feast. However you decide to cook it, you can guarantee that fish will be a delicious addition. 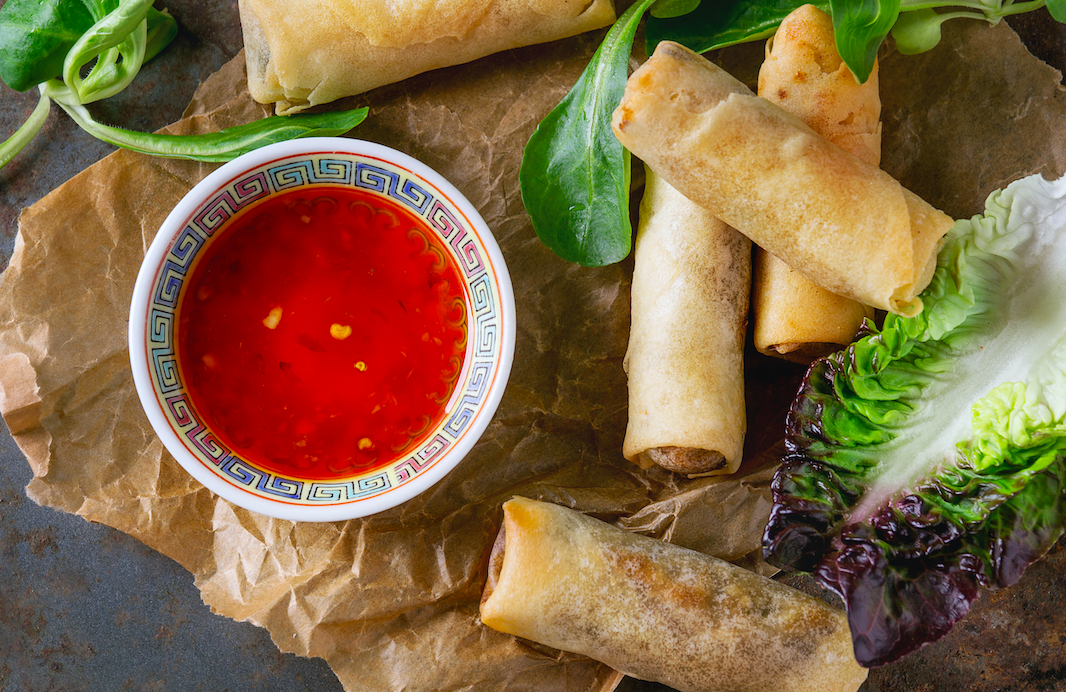 Although many associate chunjuan with the Chinese Spring festival, plenty of people also eat these "Spring Rolls" at New Year.

The dish is especially popular in eastern China and is part of Cantonese culinary tradition. The dish itself symbolises wealth as each roll resembles a gold bar.

It's no surprise that in a country as culturally vast and diverse as China that there are thousands of different ways to celebrate New Year.

Whatever way you decide to usher in Chinese New Year 2021, this list will guarantee that you'll be enjoying something suitably tasty and appropriate for a year of luck and prosperity.