A 'Willy Wonka'-style chocolate factory is coming to Amsterdam

When it comes to fictional fantasy destinations, for many, Willy Wonka's chocolate factory is pretty high up on their list of places they'd love to visit.

Now, you don't have to wait for a golden ticket because a Willy Wonka style chocolate factory is coming to Amsterdam.

The factory is being built by Dutch confectionary company Tony's Chocoloney in Zaandam, a small city outside Amsterdam, and according to Time Out, it's been inspired by Roald Dahl's novel Charlie and the Chocolate Factory.

Dutch architect firm SeARCH has released a rendering of what the new chocolate factory will look like, and all we can say is that Willy Wonky would approve. 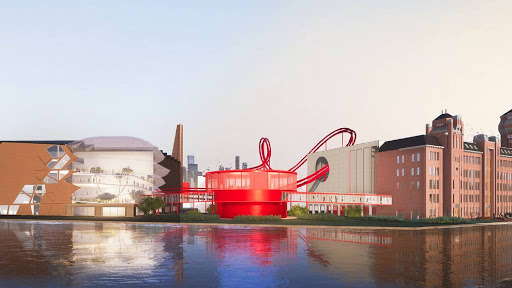 Time Out reports that the new factory is going to cost the chocolate marker around $115 million, and it's hoped that it will be opening its doors to its first wild-eyed visitors in 2024.

The chocolate producer is hoping that the new factory will be able to entertain as many as half a million visitors each year.

The initial announcement about the complex was made back in 2018 when Tony's Chocoloney said they'd be building a chocolate factory with a rollercoaster.

An announcement on the company's website said: "There will be a mega chocolate factory that everyone can visit, with a roller coaster. Really. We have been dreaming of it for ages... and it will really happen now. Whoop whoop straps.

"Tony's Chocolonely has found a crazy location on the border of Zaanstad and Amsterdam: Pakhuis 'De Vrede', on the IJ / North Sea Canal."

The company explained that the "De Vrede" had previously been used as a storage facility for storing and handling grains and seeds and described it as an "impressive building on the water with a beautiful story".

Cast your mind back to the trailer for Willy Wonka And The Chocolate Factory:

The surrounding land is going to be transformed into a public park. There will be two chocolate factories in total to make chocolate and produce bars and the entire process will be made visible to visitors.

"Every year we ultimately want to receive 500,000 chocolate fans. With a ride on the roller coaster through the factory, we hope that visitors are so upset by Tony's mission that they will participate to realise it.

"Together making 100% slave free the norm in chocolate is leading in everything we do. In the national monument Pakhuis 'De Vrede' the head office of Tony's Chocolonely will be located and as we are used to with Tony's, the door is always open for everyone. The building therefore has a public character with restaurants, sports facilities and flex spaces for impact organisations.

"It will be some time before the Tony's Chocolonely Chocolate Circus opens its doors. But we have taken the first step. In a year or 3 it will be there. In the meantime, we will keep you informed."

It added: "We are SUPER happy and cannot wait."