To the uninitiated, Indian fried chicken might sound like a contradiction. After all, there aren't many people who have the creativity or the appetite to order a curry and KFC takeaway combination on a regular basis.

However, despite its absence from many British Indian menus, fried chicken is actually an essential part of Indian culinary tradition. One restaurant that certainly recognises this is Will Bowlby's Kricket. 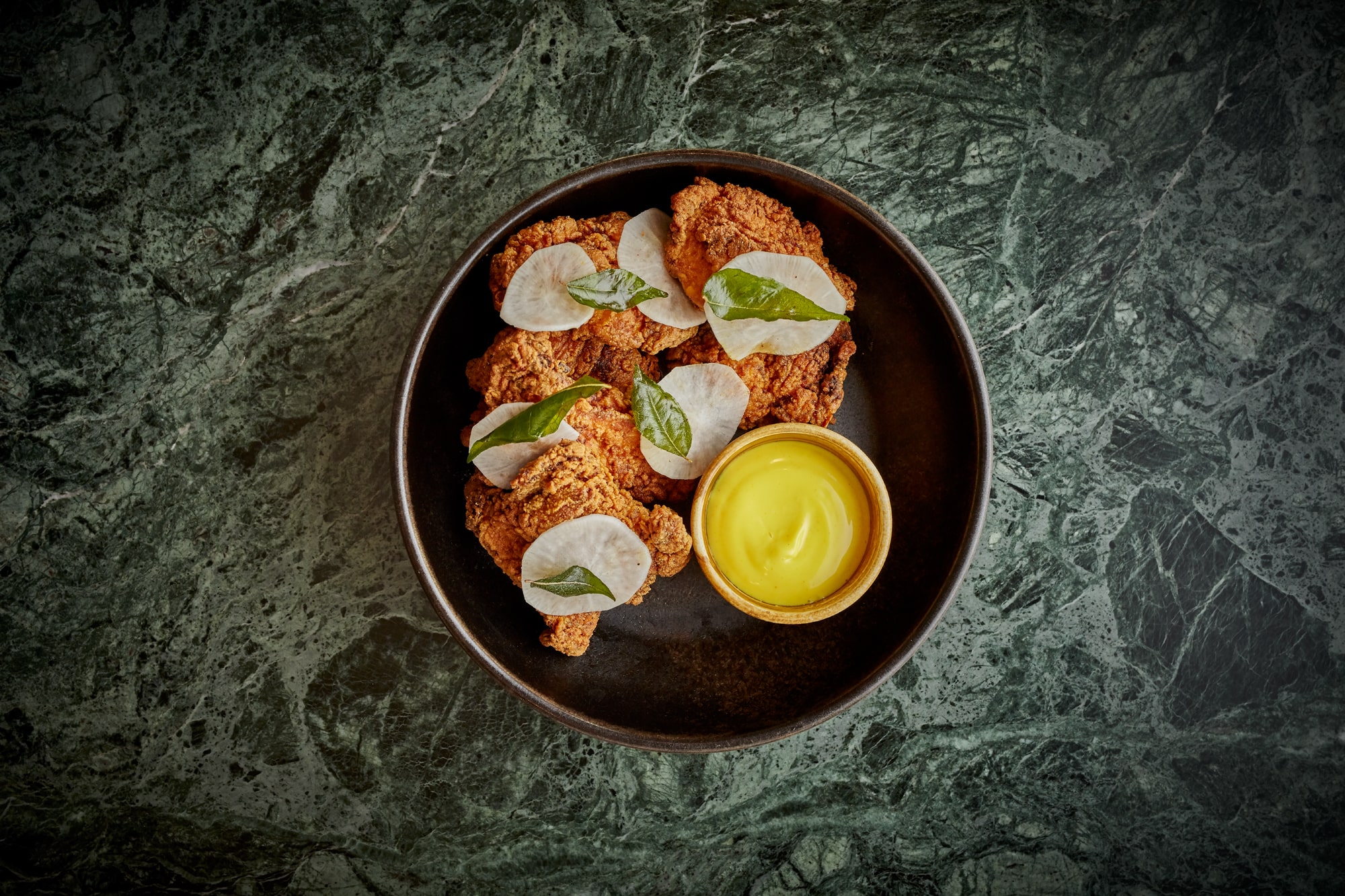 Keralan fried chicken has been a staple of Kricket's menu since it launched (Credit: Crab)

Pre-pandemic, Kricket could claim to be one of the most dynamic, exciting and innovative kitchens in the country. Specialising in Indian cooking with a tapas-y twist, the restaurant has won critical acclaim, published a popular cookbook and cemented itself as a major player in British food.

While there are several reasons for this success, Kricket's Indian fried chicken is a major factor. The dish is indisputably the most in-demand item on the menu, and has been ever since it was first introduced during the restaurant's formative years.

As Kricket's founder and head chef Will Bowlby explains to me over the telephone, "It is the most popular dish across all the menus". He later adds:

"Every January we put on a vegetarian menu for Brixton. And you still have people coming through the door saying, 'we just came for the fried chicken,' and then literally walk out again."

It has to be said that the dish does live up to the hype. Featuring a crisp, expertly spiced coating, perfectly cooked thigh meat, pickled mooli and a luxurious curry leaf mayo, it delivers everything you could want from a fried chicken dish, all expertly served with a subcontinental twist.

"It's juicy, but it's also crispy," Bowlby explains, "so it's got that real textural satisfaction. It's got some heat to it, the seasoning that goes on at the end is what makes it what it is."

Small wonder that the dish remains top of people's priorities, even in the midst of Veganuary. 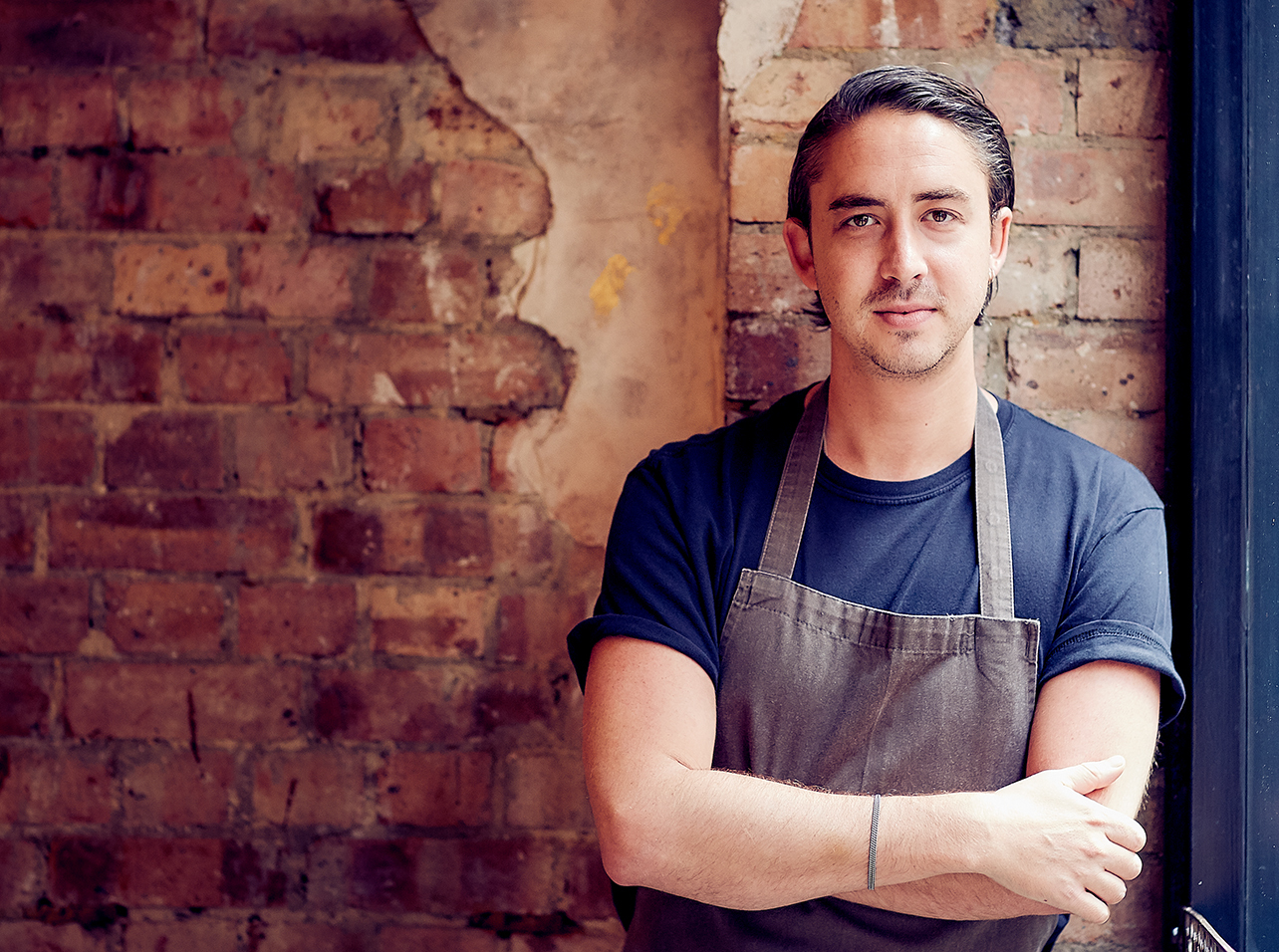 Will Bowlby is head chef at Kricket (Credit: Kricket)

Why fried chicken is a classic Indian dish

Given that many British Indian restaurants rely on signature rich sauces, soft naan and buttery rice, it's understandable that fried chicken might seem a little out of place. However, as Bowlby explains to me, the fact is that the dish has a strong tradition in India. As he says:

"Ok, if you go to most Indian restaurants, you're not likely to see a fried chicken on the menu. But this dish was inspired by the original fried chicken that you get in Kerala.

"The taste and presentation is slightly different, but there is such a thing as Indian fried chicken. They'd call it 'Chicken 65', or a chicken pakora, or Keralan fried chicken, so it does exist. But, perhaps that's not so well-known to the Western audience."

Considering the dish's perennial popularity, there's no doubt that the concept works. 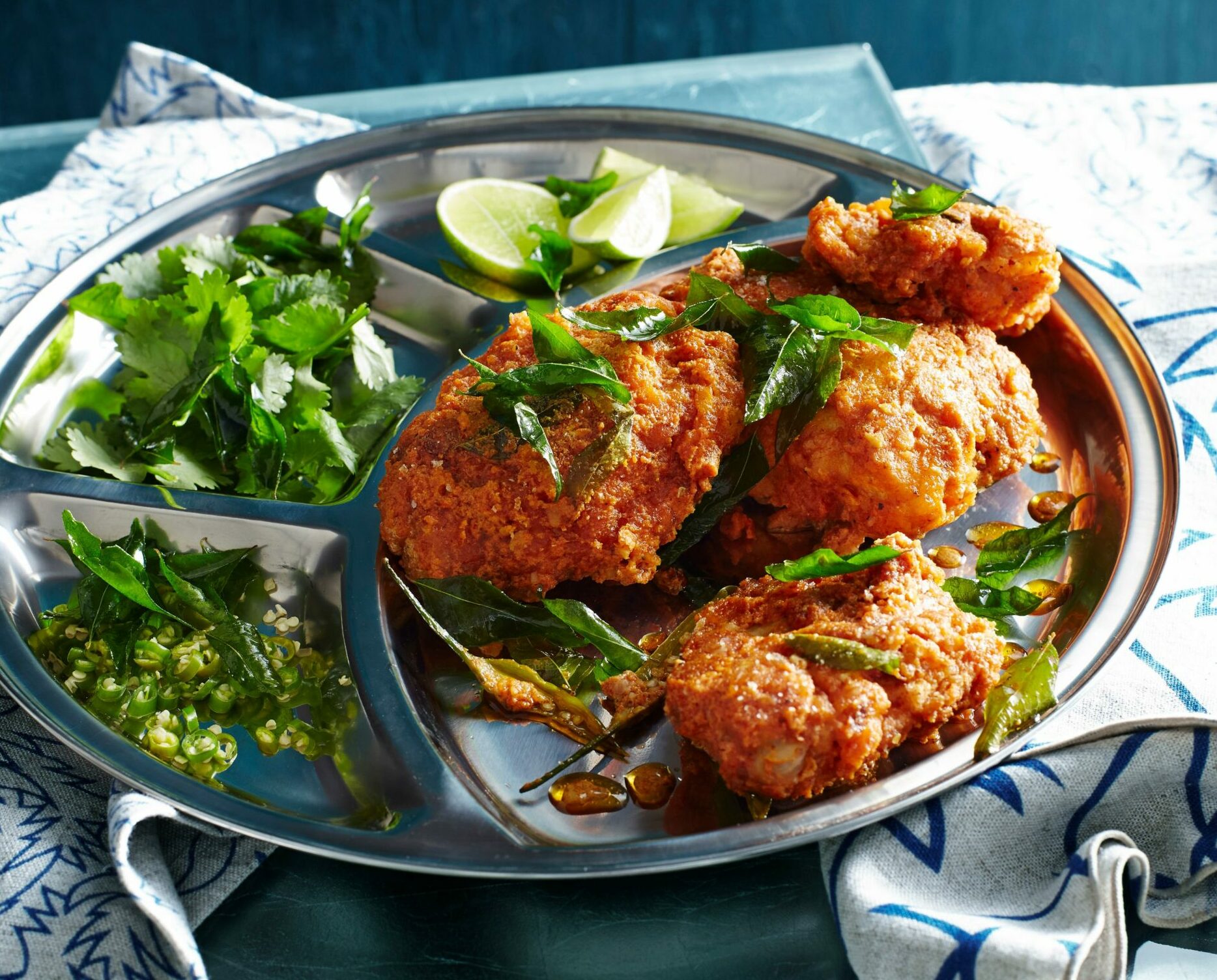 One of the world's quintessential fried chicken dishes, Chicken 65 has an almost mythological back story. Some claim that it was originally served to Indian soldiers in 1965. Others believe that it contains no less than 65 different types of chilli.

Either way, the dish is now a popular feature of the Indian fast food scene. This explains why it is a natural addition to any modern Indian restaurant.

For his part, Bowlby has first-hand experience of these Indian fried chicken traditions. He was inspired to set up Kricket after extensive travelling across the country, as well as a period spent living in Mumbai.

This period ultimately helped inform dishes like Kricket's Keralan fried chicken and make the menu what it is today. It might strike some as a surprising addition, but there's no doubt that the concept is closely rooted in tradition. 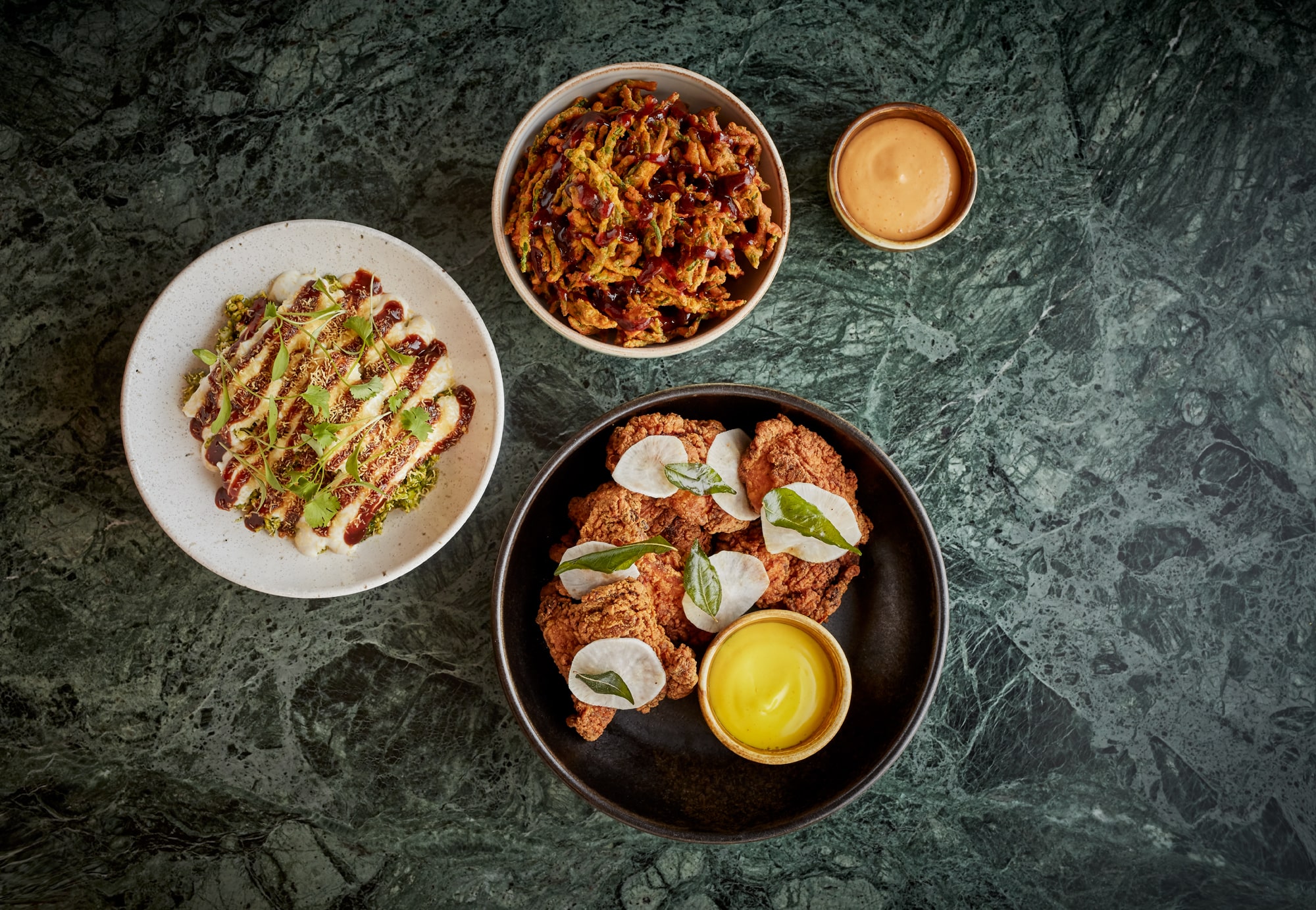 How to make Indian fried chicken

Indian fried chicken continues to be an indispensable part of the Kricket menu. However, it turns out the design of the dish wasn't months in the making, but actually came about by sheer coincidence. As Bowlby explains:

"It was kind of a happy accident, really. Our first restaurant was in a shipping container in Brixton. Within that was both a restaurant and a kitchen, so not a lot of space!

"I wanted to put tandoori chicken on the menu but couldn't fit a tandoor into the space. So I adapted a tandoori marinade and deep-fried it and it worked straight away."

Bowlby has previously been very open about his fried chicken technique, even providing a written recipe to The Evening Standard in 2018. However, he also has some additional tips for eager cooks looking to incorporate Indian flavours and techniques at home. He reveals:

"Probably the most important thing is how you treat the spices. For instance, if you want to add chilli to something it's not just as simple as adding a spoonful of chilli powder.

"Each spice reacts differently to heat, whether they're powdered or whole. They need to be treated properly in order to have the right effect on what you want to adapt."

READ MORE: 6 famous fried chicken dishes from across the world - from the USA to Korea

However, for all the creative expertise that go into Kricket's Keralan fried chicken, Bowlby is also wary of taking things too far. As he explains it to me:

"There's a fine line between taking inspiration from a country and adapting it to the best of your ability and fusion for the sake of it.

"I'm always trying to avoid putting chicken tikka on a pizza or serving a spiced up pasta... I'd definitely try to avoid spicing up something that is otherwise quite familiar for the sake of it."

However, he isn't totally dismissive of the occasional controversial food mash-up. As he puts it:

"If people want to put chicken tikka on a pizza and they enjoy it then brilliant! But it's just not the way that I would go about it."

Here's hoping no one shows him one of our giant curry-stuffed calzones. He and the Kricket team might not approve.

Kricket is part of Twisted's brand new Cheque It Out campaign.