An individual has reportedly threatened to make a formal complaint to their work's HR department because their co-worker was refusing to bake a cake for them on their birthday.

The female co-worker received the very entitled request via text message. Flabbergasted to have received such a brazen request, she later posted a series of screenshots of the exchange on Reddit.

But not only is it outrageous that the individual (who isn't named in the Reddit post) was demanding that her colleague make a cake for her birthday entirely for free - there's also the pretty significant fact that the pair hardly know each other.

The first of the messages which the co-worker was sent, reads: "Hey I heard that you baked a cake for your team on his birthday. It’s my birthday next week, can you bake me a cake and bring it into the office? It’s free right?" 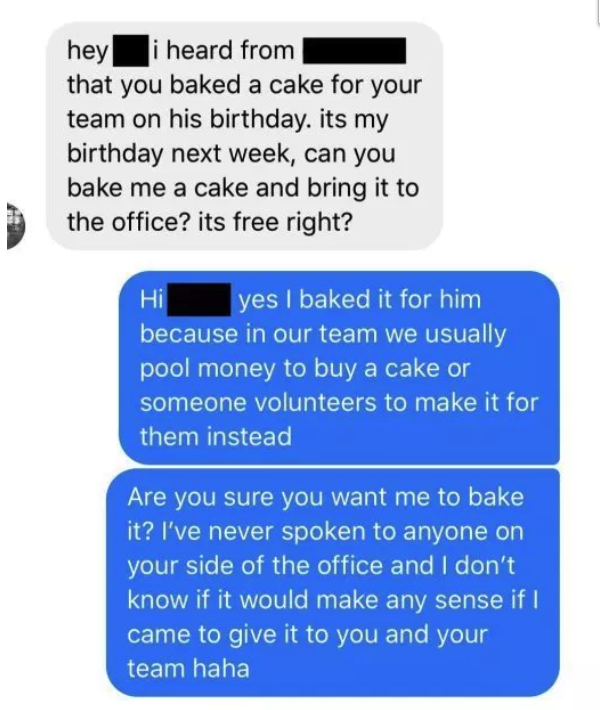 In her reply, the woman clarifies that she had made the cake voluntarily as it was one of her own team member's birthday - a person she knew a great deal better than the individual demanding she make her a cake.

"Yes, I baked it for him because in our team we usually pool money to buy a cake or someone volunteers to make it for them instead," she wrote.

She then explains that it wouldn't make any sense if she came to the individual's team to give them the cake as she isn't a part of the team.

Although, based on how the person comes across in the exchange, it's no wonder she seems so concerned that none of her own team members would be willing to pitch in for a birthday cake, or make one themselves.

"Are you sure you want me to bake it?" the Reddit user very reasonably asks. "I've never spoken to anyone on your side of the office."

"I was gonna buy a cake to but its free to ask you to make it," the incredibly entitled co-worker responds. 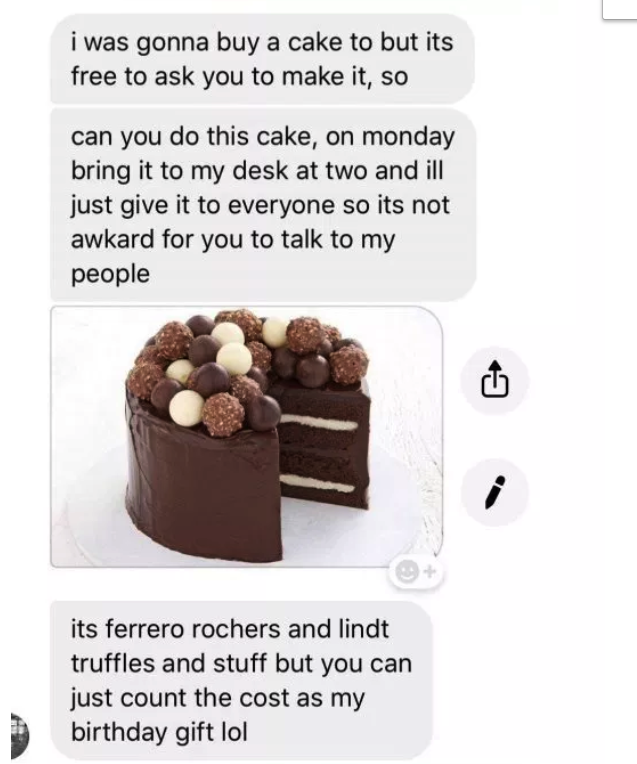 The individual then sends a picture of the somewhat extravagant cake that they want the woman to make, writing: "Can you do this cake on Monday bring it to my desk at two and ill just give it to everyone so its not awkward for you to talk to my people."

The Redditor continues to refuse her colleague's outrageous demands, responding: "I think maybe it's best for you to order a cake so you know it'll be up to your standards." 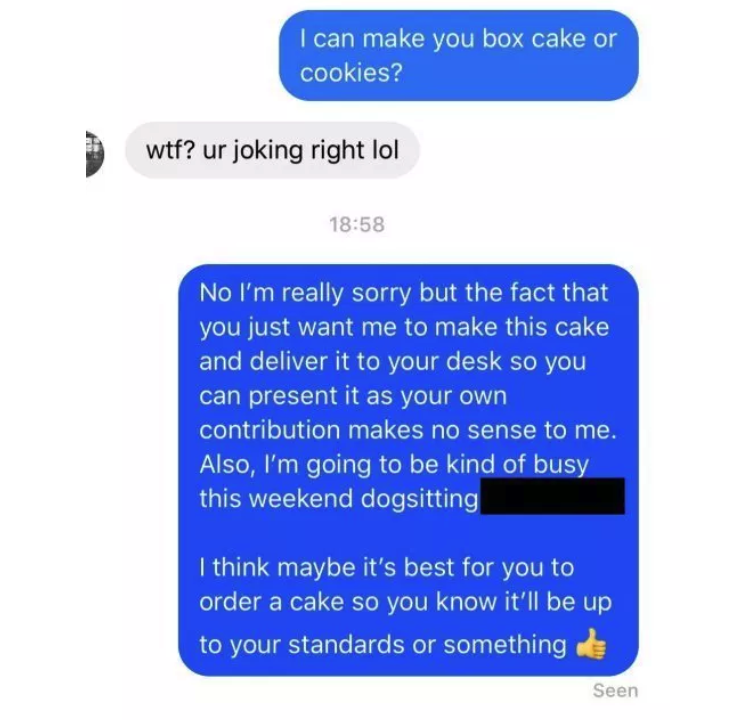 And this is the unjustifiably disgruntled response she receives: "u think i have the money for that? please!!! youre my coworker. its my birthday. i want this cake."

The co-worker ends the unintentionally humorous exchange by threatening to get HR involved. Yes, really.

Soon after the Redditor posted the screenshots, plenty of other Reddit users began chiming in on the ludicrous situation that the woman was unfortunate enough to find herself in.

"Is it possible to bake a cake with like the screenshot of this convo on top of it? It would be pretty hilarious," one user wrote.

"I’d bake the cake, put the screenshot and cut all of the pieces for every single one in the office except her," another wrote. "But that’s just my petty imaginary world."

Now, I'm imagining a cake with the above screenshots imprinted on the icing - now, wouldn't that be delicious?