Dolly Parton's venture into the ice cream industry has been a resounding success.

The Jolene singer, best-known for her musical rather than cooking talents, announced the unprecedented collaboration back in March. Since then, anticipation over the ice cream has reached fever pitch, to the point where fans are willing to fork out some serious dough to get a taste.

In fact, some people are so desperate to sample the limited-edition flavour that they're willing to put up a grand for the privilege. Who says ice cream can't come at a premium. 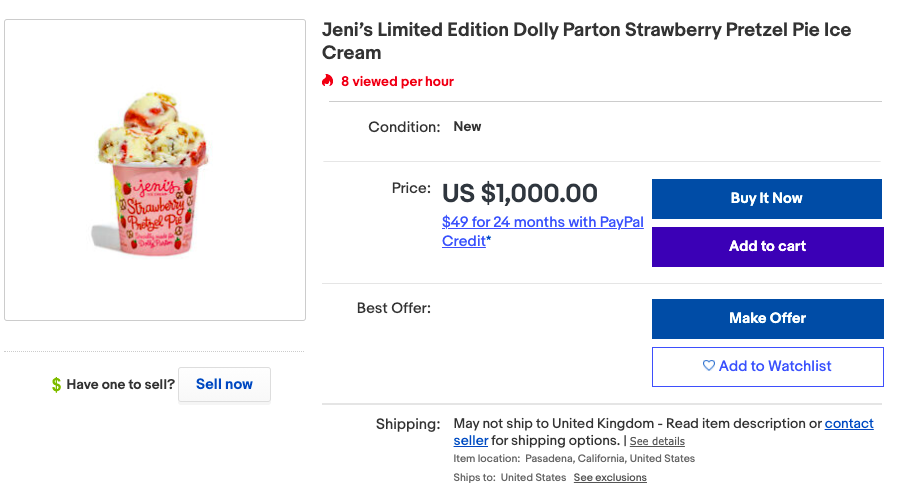 The new ice cream is currently available on eBay for $1,000 (Credit: eBay)

Dolly Parton's ice cream comes courtesy of a collaboration with Ohio-based brand Jeni's. Although there are just 10,000 tubs of the Strawberry Pretzel Pie concoction, nobody knew how popular it would be.

Within minutes, the Jeni's website had crashed due to demand. As a baffled Jeni's social media manager put it on Twitter, "Did y'all just break our website?"

READ MORE: Deep-fried ice cream is the new food trend that you absolutely need to try

With the ice cream apparently unavailable from official outlets, desperate customers began seeking it from other sources. This led some enterprising individuals to list it on eBay at a hugely inflated price.

One listing has the ice cream available for an exorbitant $1,000 per tub. Although the seller explains that "80% of this sale will be donated to Dolly Parton’s Imagination Library", that still leaves $200 as a tidy ice cream profit.

While $1,000 is the price to buy the tub outright, there is also the option to make an offer. Still, whichever way you spin it, people are clearly going to extraordinary lengths for the new flavour. 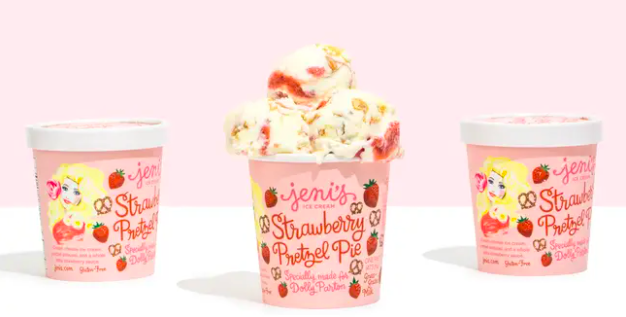 What makes the situation even more bizarre is that Jeni's has made it clear that the ice cream hasn't actually sold out. As the company explained in a statement on Twitter:

"To those of you trying to order Strawberry Pretzel Pie online, we are so sorry. This sucks.

"The flavor is NOT sold out. Our website issues have lasted longer than expected, but we are working on it and will let you know via email and social media when we’re back up and running."

Given that the lack of supply is technical rather than physical, the attempt to flog the ice cream for $1,000 seems seriously strange.

READ MORE: 7 drinks you should never order at a bar

However, as things stand, the flavour is still not available via the Jeni's website. The company is continuing to look for a technical solution, and will "give (a) 48-hour notice via email and social media before (releasing) the flavor".

Despite the difficulties with purchasing, there's no doubt that the ice cream itself sounds delicious. According to the official description, the sweet and salty dessert is "a throwback to the triple-decker pie from the potlucks of our youths".