For many, boredom is at an all-time high during the coronavirus pandemic, but to ease it, Guy Fieri and Bill Murray are now competing in a live nacho-making contest.

The contest is being sponsored by the tortilla brand Tostitos, and it will be judged by basketball icon Shaquille O'Neal and Brooklyn Nine-Nine's Terry Crews. Needless to say, it will be held in Fieri and Murray's respective houses.

Fieri said that the two families have had "long-standing generational battles of food competitions" and Murray responded to the Flavourtown chief by saying that it's "nacho time."

Murray revealed that he's a "purveyor" of food when cooking at home on The Tonight Show Starring Jimmy Fallon with Fieri.

Murray and Fieri will also take on the assistance of their sons, Homer and Hunter. The Caddyshack star added: "I'm really happy to be a part of this because, Guy, you're going to get work off of this."

The event was set up to raise money for Fieri's Restaurant Employee Relief Fund (RERF), which was established to offer help to restaurant workers who have been affected by the coronavirus pandemic.

Fieri explained: "My entire career has been in the restaurant business. From bussing tables to flambé captain to dishwasher to chef… I have done it all."

"I've also spent the better part of the last 15 years traveling this great country meeting other folks who've dedicated their lives to this business, and let me tell you something, they are the hardest working, most real deal workers you’ve ever met… the heartbeats of their communities.

But they need our help and with the Restaurant Employee Relief Fund, we can serve up some support when these restaurant employees need it most… right now." 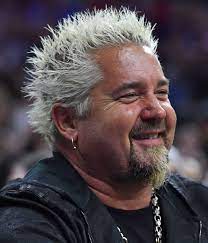 The Diners, Drive-Ins, and Dives host has raised over $22 million for industry staff in just a month.

"It just shows how much need there is… I hope everybody digs deep and finds a way to benefit these people that need support," he told Insider.

Fieri urged people to support local businesses saying: "Anything we're doing is great: buying gift cards, making donations, doing takeout, doing delivery. Restaurants have been serving us for so long. Now is a chance for us to serve them."

So, when can you watch the showdown? I hear you ask. Well, the Nacho Average Showdown will be broadcast on the Food Network's Facebook page on May 15 at 5 pm ET.