Here's why avocados are the official food of the Super Bowl

Football and guacamole are inseparable. Like an edible Sonny and Cher, Ross and Rachel, or Han and Chewy, it’s impossible to imagine one without the other. Any game day automatically becomes that much more enjoyable when there’s a bowl of something green and sludgy on hand for absent-minded dipping. Inexplicable lattes and endless toast-spreading might have made them significantly more irritating, but avocados are still an all-important part of American sporting tradition.

Like other successful partnerships, guac’s relationship with the NFL can look as though it was written in the stars. Unfortunately for more romantically disposed sports fans, there are precious few fairy tales in an industry as cynical as modern food. In reality, avocados’ place at the pinnacle of the Super Bowl food pyramid is a result of careful planning, meticulous calculation and the unstoppable advance of global capitalism. The truth can sometimes be tricky to swallow. 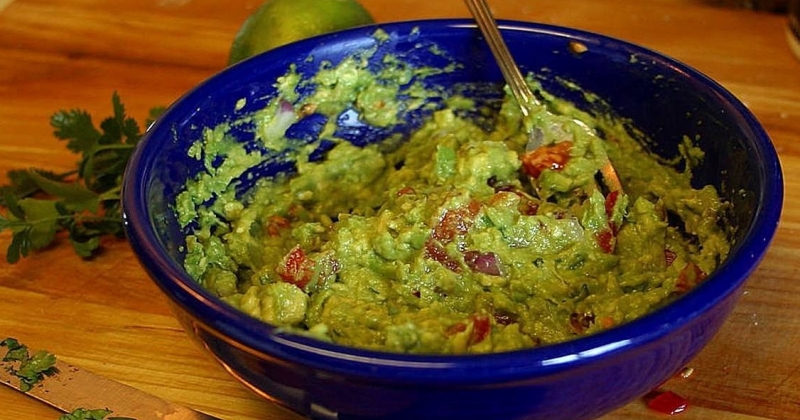 It’s impossible to fully grasp just how obsessed football fans are with avocados unless one gets down and dirty with some cold, hard stats. As ever in a nation often vilified for its excess, the numbers are staggering. According to official figures from the California Avocado Commission, an extraordinary 139 million pounds of avocados will be eaten during the Super Bowl. Most of this will be in the form of guacamole.

Given these numbers, it’s no surprise that avocados have always been a big business in the United States. In fact, the country is the world’s third largest producer of the fruit, lagging just behind Mexico and Brazil. Most of America’s crop is grown in southern California, where the climate is perfect for growing famously delicious Hass avocados en masse. More than 3,000 avocado farmers work more than 60,000 acres of orchard across the state. This means a lot of fruit for millennial mouths.

However, if you take the time to look a little closer at the California industry, there is an alarming disparity between what’s grown and what’s eaten. The California Avocado Commission website, which proudly boasts about the huge amounts of produce that the state grows, also declares that no Californian avocados are available until March. In fact, the entire American season only runs from mid Spring through to the end of August - a brief window for customers who are keen to buy local.

This situation makes football fans’ obsession with avocados all the more baffling. How is it that a fruit that should be unavailable until long after the season has come to a close is perhaps the defining dip of the biggest date in the American sports calendar? The NFL have a lot of power, but even they can’t command the seasons.

The answer to this conundrum lies just south of the border. Back in the 1990s, Super Bowl snacks were still an exclusively American affair. Potato chips, pizza and buffalo wings were the undisputed kings of party food. Avocados, though still popular in the summer months, were never considered a big player for anyone hosting a football-themed foodathon in early February. Plates were decidedly on the beige side.

This all changed with the signing of one of the most lucrative, and often controversial, economic agreements in American history. NAFTA made it easier than ever to trade goods and services across the borders between Mexico and Canada, letting businesses from all three nations expand into and explore different markets. When President Clinton put pen to paper on the deal in 1993, one particular industry sat up and sensed an opportunity to make America green again.

Mexico’s avocado growers had long benefited from an environment ideal for year-round fruit production. Most fruit was either sold domestically or exported overseas, away from the Americas altogether. But, as the biggest single avocado market in the world, NAFTA provided the industry with an opportunity to exploit a new and highly profitable customer base to the north. Thanks to the deal, American consumers would be able to get hold of avocados virtually all year round. It was a chance the industry seized with both hands.

Almost immediately after NAFTA became law, Mexico’s avocado growers began a marketing campaign focused on placing the fruit front and centre of the football menu. Some advertisements, such as 1992’s “Guacamole Bowl” featured recipes from NFL players and their families and encouraged the public to vote for their favourites, whilst others emphasised the relative healthiness of the gloopy green dip. As Bonnie Goodman, executive of a major avocado advertising account in the 80s and 90s, explained in an interview with The Atlantic: “We didn’t say, ‘We should eat guacamole during the Super Bowl’...But we took advantage of a huge opportunity to play it out.”

The campaign continues to this day. The conglomerate “Avocados From Mexico” has taken out a 30-second advertising slot during the Super Bowl itself for the last five years, emphasising the year-round qualities of Mexican avocados vs their American competitors. The results speak for themselves. According to official statistics from the University of California, imported avocados have outnumbered domestic fruit since 2007. There’s little doubt that the multitude of successful Super Bowl campaigns have played a major part in making it happen.

For all football fans, avocados and football look like a natural all-American partnership. It’s natural to think that we aren’t all slaves to the power of the international marketplace, and that we’re more than capable of deciding what we do and don’t dip into with our chips. But, as peeling back the curtain behind the history of the avocado industry proves, we’re mostly just pawns in a much bigger game. It might be delicious, but don’t pretend that your decision to eat guacamole in February had anything to do with you.