Anyone who breaks a world record deserves to be feared and respected. The skill and dedication that it takes to eclipse the achievements of every other human being, whatever the field, should never be underestimated.

That said, there are some records that stand apart. Whether for the sheer physical prowess involved or just because they’re plain weird, some feats are so extraordinary that they demand extra attention. This weekend, one such record was smashed by the world’s most famous hot dog enthusiast.

A competitive eater who has completed some of the most impressive and revolting tasks ever, Joey Chestnut is a scoffing legend. Although hot dogs are his speciality, over the years Chestnut has set records for burgers, Twinkies and hard-boiled eggs, to name but a few of his victims. On Sunday, however, “Jaws” returned to his favourite foodie sub-genre, obliterating his own hot dog eating world record by inhaling 75 dogs in just 10 minutes.

Watch footage from the event here:

Chestnut’s latest milestone was set at the annual Nathan’s Hot Dog Eating Contest, held every Fourth of July. This year, due to pandemic-related restrictions, the event lacked the usual pomp and ceremony associated with the sausage-centric festivities.

Not only were fans not allowed to attend for the first time in the event’s history, but competitors were separated by plastic screens in order to maintain some semblance of social distancing. Even so, despite the lack of cheering crowds, Chestnut was still able to propel himself to further heights of stomach-stretching endurance, beating the previous benchmark by one dog. 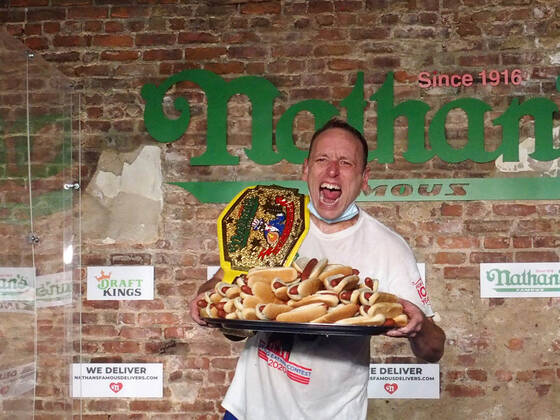 Speaking to ESPN after his remarkable performance, Chestnut - who had eaten approximately 21,750 calories during the event - revealed:

"It was hard. I knew I was fast in the beginning. It was like blistering speed. And the dogs were cooked really well today. Minute six is where I really missed the crowd ... and I hit a wall, and it took me a little bit more work to get through it. This is a crazy year, and I'm happy I was able to get a record."

If anything, the lack of a crowd seems to have actively contributed to a record-breaking atmosphere. In the separate women’s event, female competitive eater Miki Sudo set her own world record, downing 48.5 dogs and breaking a barrier that had stood for seven years. It might have been an unusual year, but Nathan’s Hot Dog Eating Contest 2020 will still live long in the memory.