Where is the nicest McDonald's in the world? 11 of the most beautiful Golden Arches ever built

For some people, searching for the nicest McDonald's in the world might sound like a pointless endeavour.

While the Golden Arches certainly delivers on the food front, the restaurant isn't necessarily known for its architecture.

However, as ever with the food industry, it's a mistake to make unfair assumptions based on previous experience. 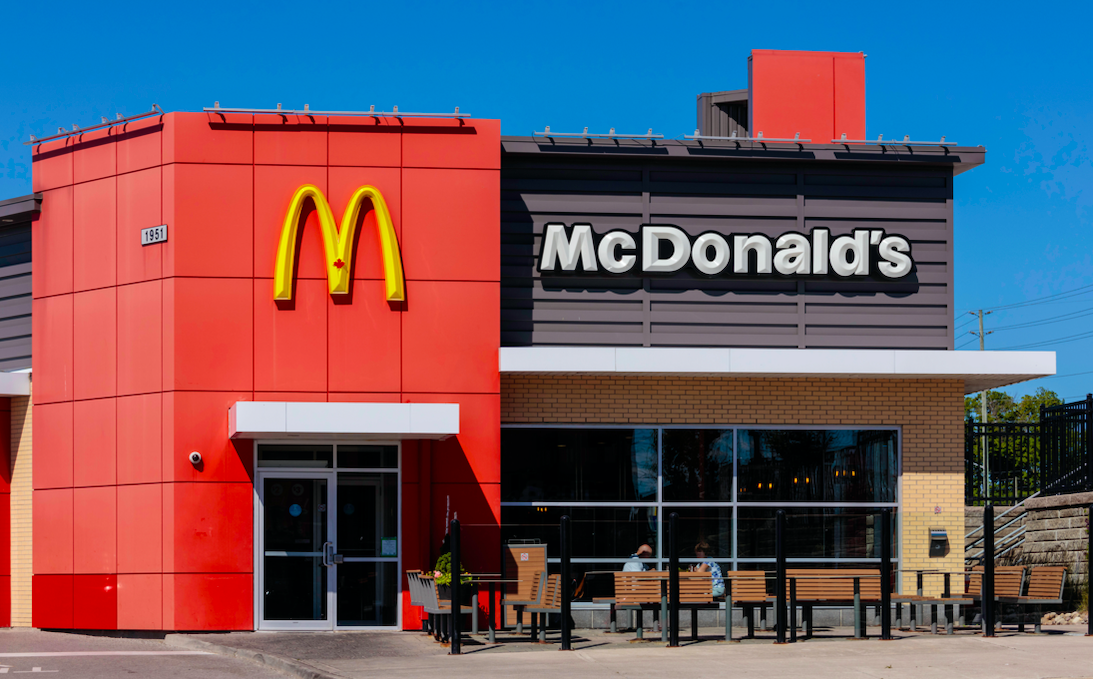 Where is the nicest McDonald's in the world?

Despite its reputation for cold, plastic efficiency, McDonald's does actually boast some seriously spectacular restaurants.

In fact, some franchises are so unique that you could be forgiven for thinking that they belong to a completely different business.

READ MORE: The Queen has her own McDonald's – and it's SO posh

To help you plan your next picturesque Big Mac, we've pulled together some of the most beautiful Golden Arches from around the world.

If your surroundings really can enhance your eating experience, these restaurants must serve the best McDonald's on Earth. Here are the nicest McDonald's in the world. 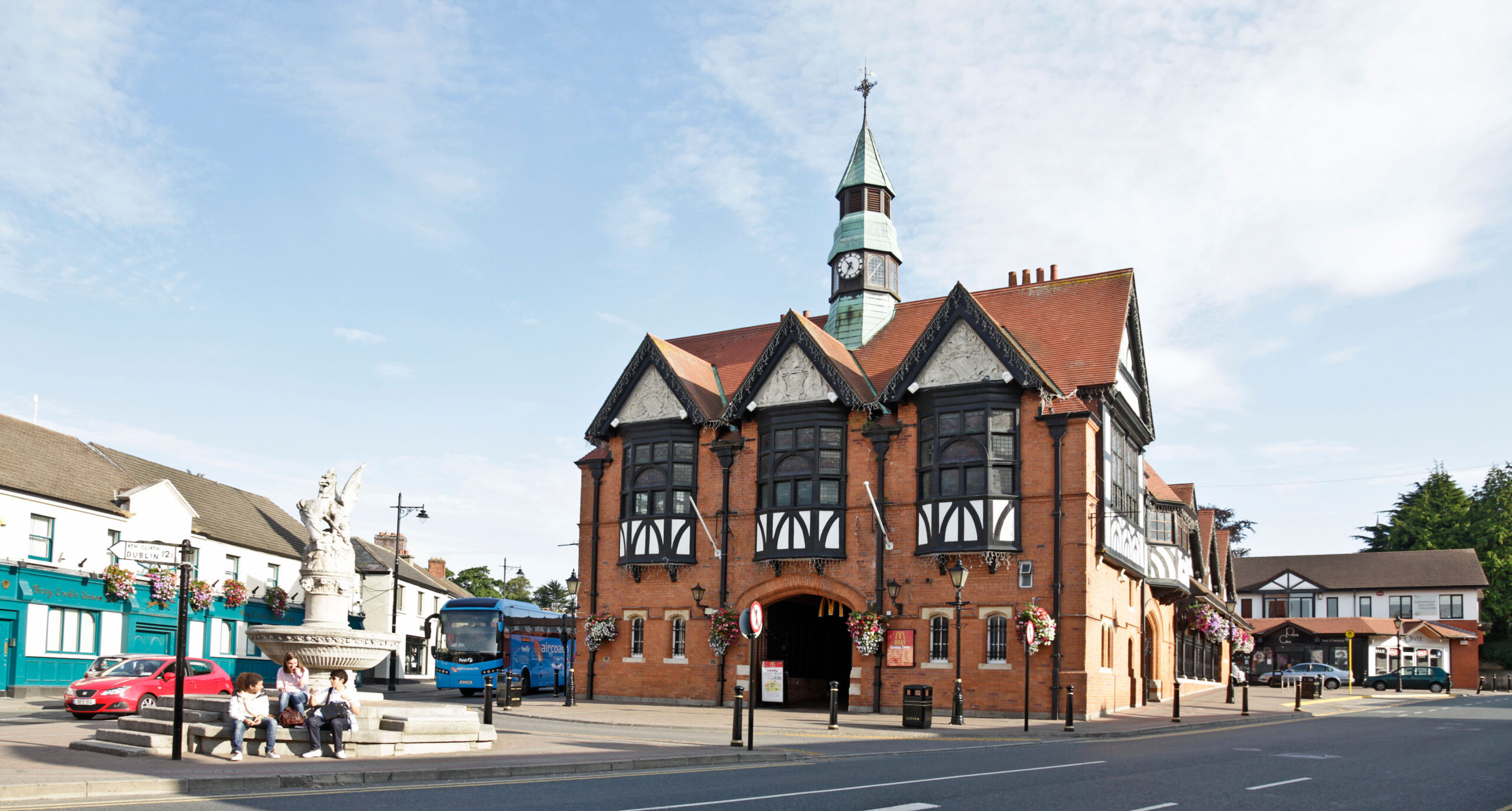 This 19th-century town hall building might be a far cry from a traditional Maccies setting, but the Golden Arches had no hesitation in moving in in the late 90s.

According to a contemporary report by The Irish Times, the franchise costs an annual rent of £47,000 per annum. That seems like a steal, considering the setting.

As the McDonald's capital of the world, it makes sense that America is also home to some of the business' more quirky ventures. This historic mansion in New York state is a prime example.

It turns out that McDonald's HQ had originally planned to tear the 18th-century relic down. However, vociferous opposition from locals means that you can now enjoy a Big Mac in serious style. 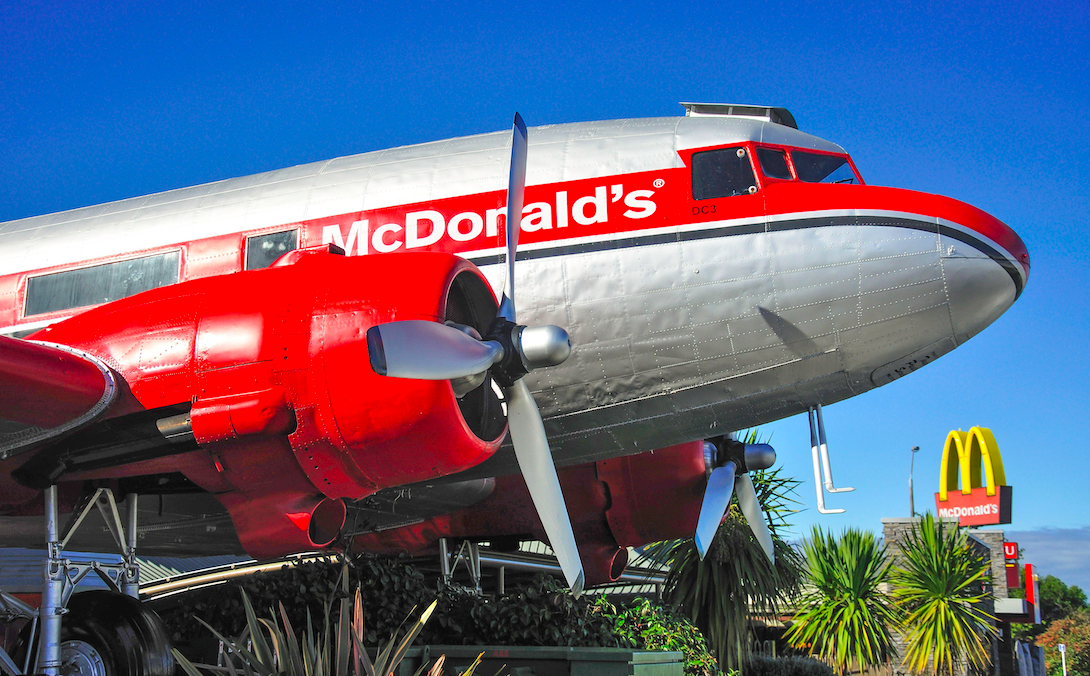 The Taupo McDonald's is built into a plane (Credit: Alamy/Greg Balfour Evans)

McDonald's might be one of the go-to destinations for a quick bite before a flight, but this Taupo restaurant takes things to alarming new extremes.

Located in New Zealand, the restaurant is the only one in the world that makes use of a decommissioned plane. Customers can eat their food in the aisle, and even pay a visit to the cockpit. 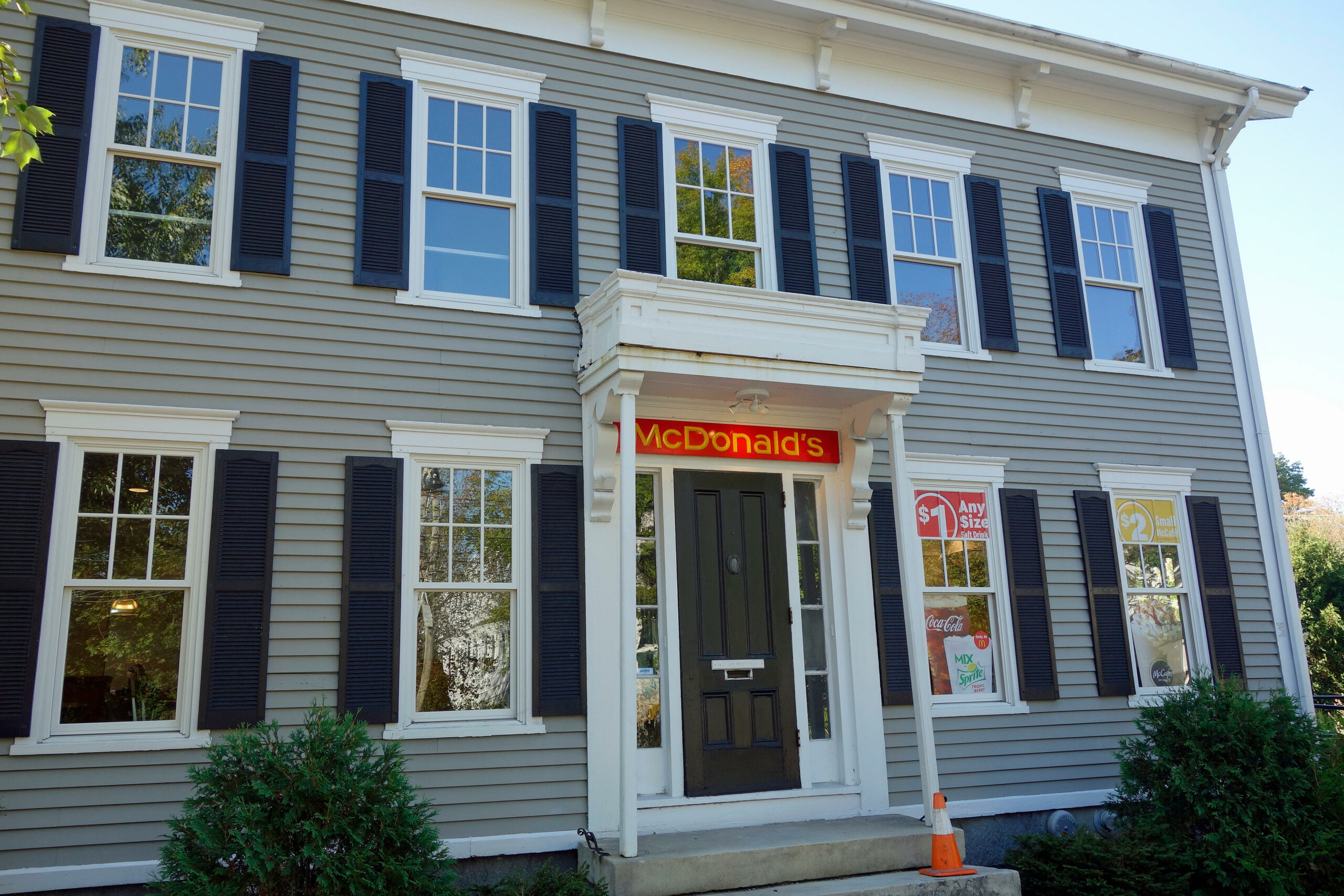 Another of America's spectacular historic McDonald's, this Maine location was actually a ship captain's house. The interior retains much of its original rustic charm while offering a spruced up McDonald's menu.

In fact, Freeport McDonald's is the only one that serves lobster rolls. Whatever the ethics of taking over a beautiful old building, it's certainly an upgrade on Filet-O-Fish. 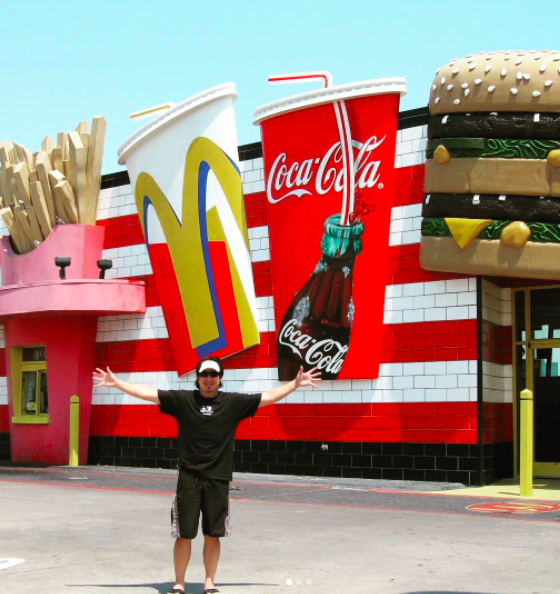 The McDonald's in Dallas looks like a Happy Meal (Credit: Instagram/@giantbigstuff)

When you're a kid, McDonald's understandably seems like the greatest place on the planet. No restaurant makes a stronger case for this argument than this Dallas location.

Not only is the restaurant itself shaped like a giant happy meal box, but it also apparently contains one of the best play areas anywhere. What we'd give to be five again. 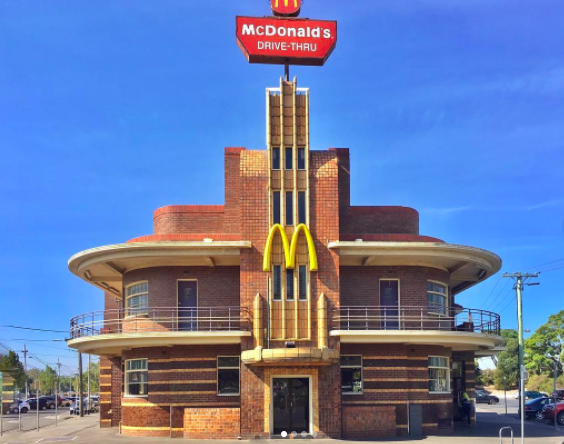 This McDonald's restaurant in Melbourne makes use of an art deco design (Credit: Instagram/tallstorey)

Art deco has always been a divisive aesthetic. However, even its staunchest opposition would be hard-pressed to argue that this Melbourne Maccies is anything other than spectacular.

The restaurant itself is actually housed in an original 1930's art deco design and boasts dozens of intricate details. 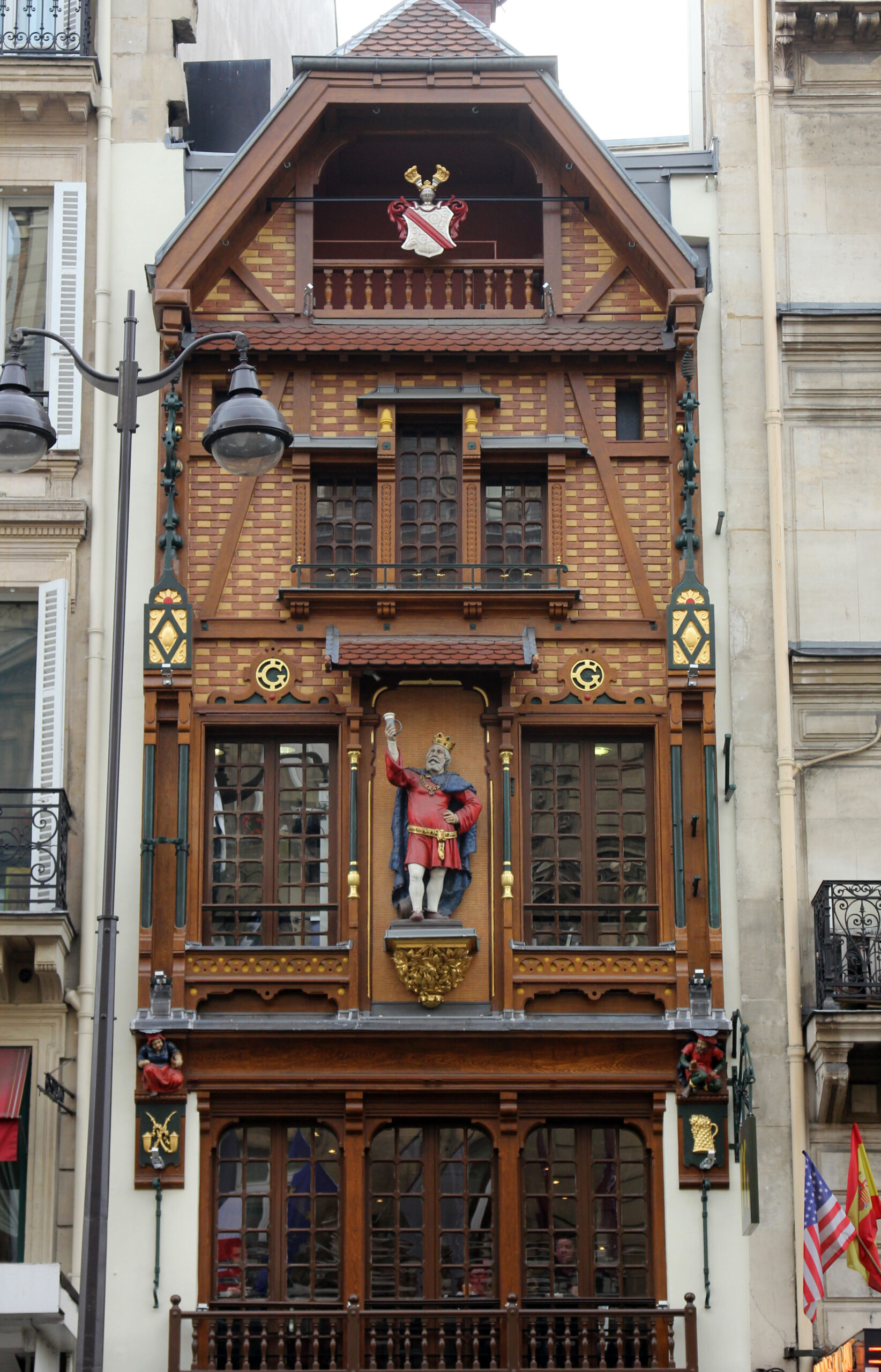 This McDonald's in Paris has a unique facade (Credit: Alamy/Zvonimir Atletić)

At the opposite end of the architectural scale to 20th-century art deco is this medieval-style Parisian oddity.

Though the exact date of construction for this extraordinary facade is unknown, it was declared a historical monument in 1997. The ornate design features wooden statues and even a coat of arms. 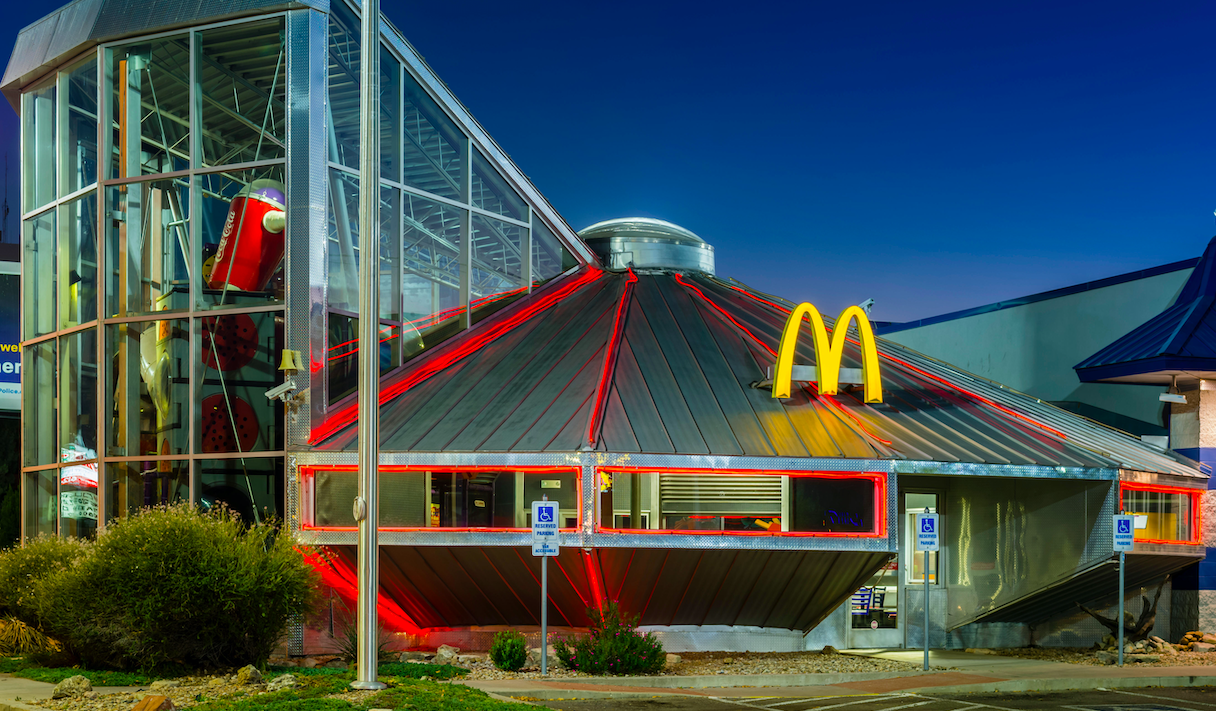 Most people associate Roswell, New Mexico, with one thing and one thing only – UFOs. Understandably, McDonald's thought they wouldn't get any points for subtlety with this restaurant.

The UFO-inspired design features neon lighting and an extra-terrestrial theme. Whether the food is out of this world is another matter. 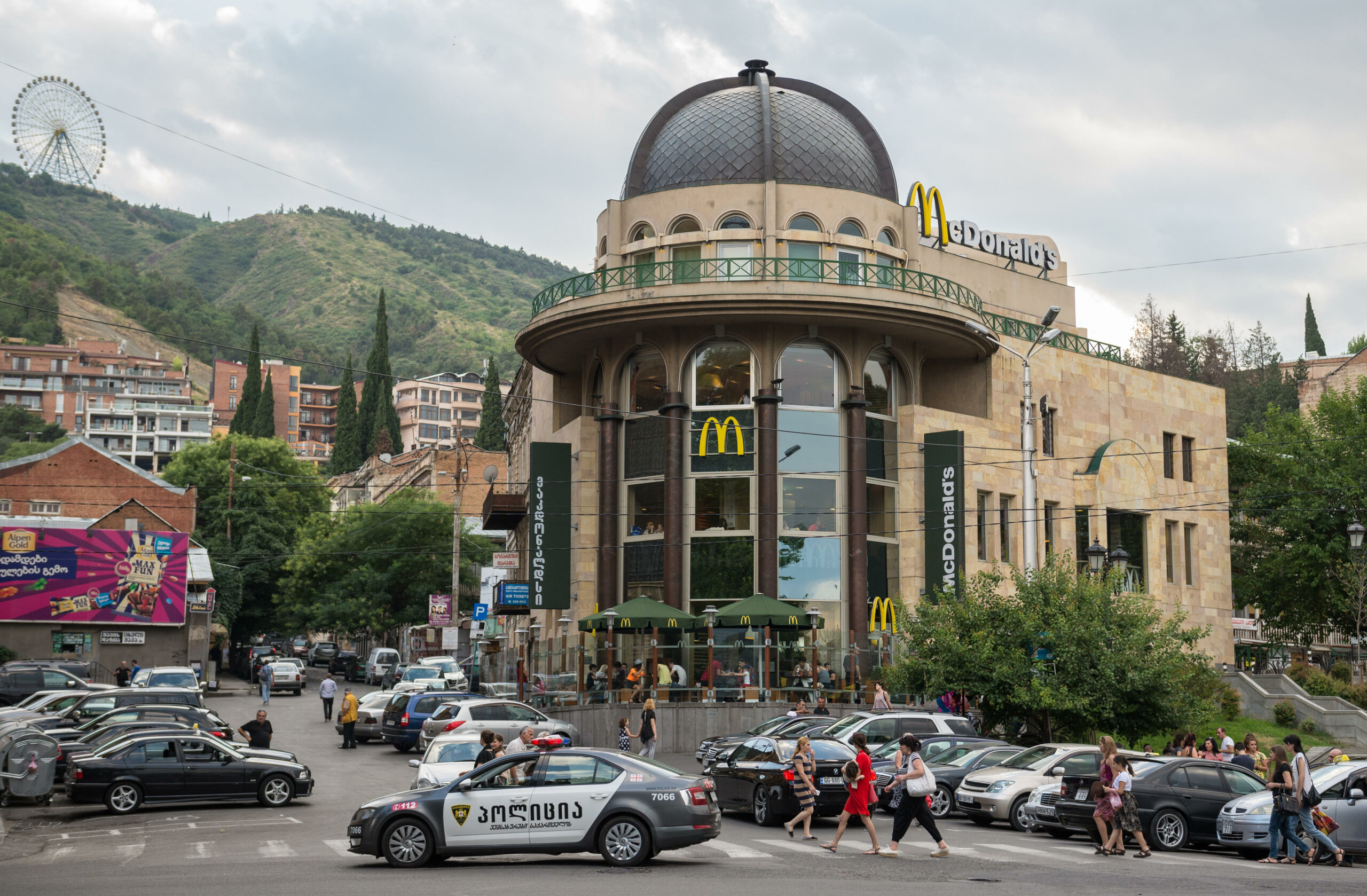 Sticking with the space theme, this Georgian McDonald's incorporates a more traditionally scientific look. Having said that, this mock-astronomy tower is certainly an eye-catching addition to the skyline.

Unfortunately for would-be stargazers, the restaurant doesn't actually have any telescopes in house. Still, it certainly beats the usual setting. 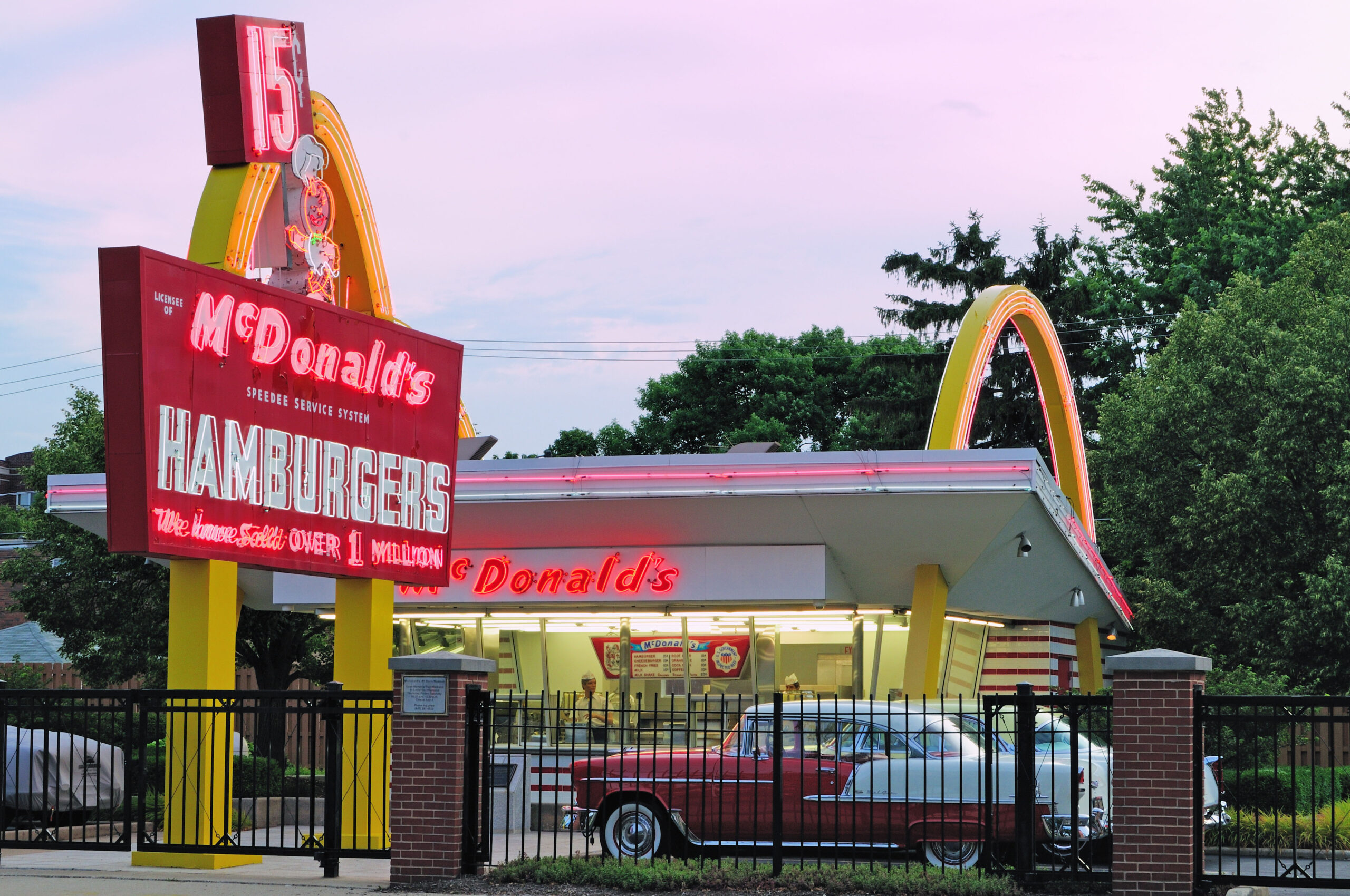 McDonald's has certainly changed a lot since its inception. Everything from the introduction of new menu items to the incorporation of new technology has dramatically affected the way the business works. Sometimes, however, it's worth remembering where a business actually came from.

This McDonald's in Illinois features the original Golden Arch design and provides a retro glimpse back into the past. 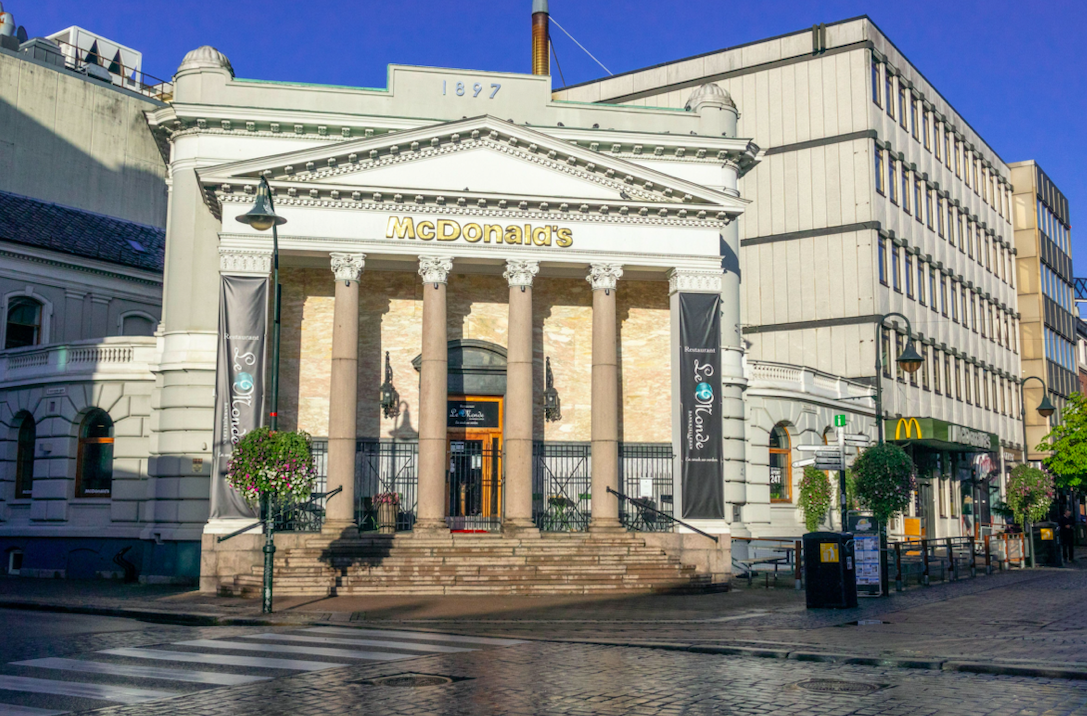 This Norwegian McDonald's is in an old bank (Credit: Alamy/Norman Pogson)

One of the most common criticisms of McDonald's is that it exemplifies many of the flaws in our capitalist economic system. If there's any truth to these accusations, putting a restaurant in a bank seems to be incredibly apt.

This Norwegian branch, housed inside a 19th-century mock-Roman building, is certainly impressive to look at. Plus, ordering a Quarter-Pounder is infinitely more exciting than opening a checkings account.