Nostos' Kyriakos Baxevanis reveals everything we get wrong about Greek food

Most of us think we know Greek food. After eating our fill of gyros, moussaka and olives, we sometimes assume that we've sampled the best that Greece has to offer.

Unsurprisingly, this couldn't be further from the truth.

Beyond the basics, there is a world of exciting flavours and ingredients that Greek cooking has to offer. You just have to know where to look.

Thankfully, one restaurant in Brighton is on a mission to show everyone what we're missing. 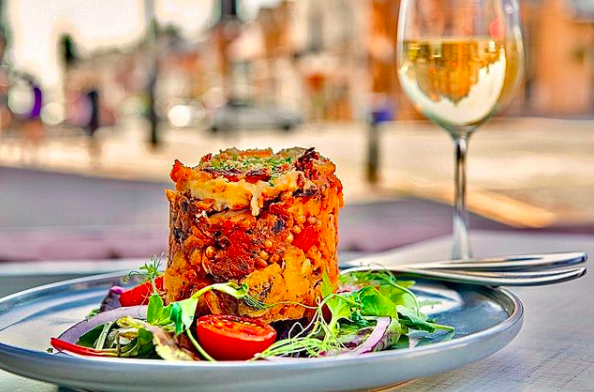 The vegan moussaka at Nostos is one of the highlights of the menu (Credit: Instagram/Nostos_hove)

At Nostos in Hove, chefs are aiming to re-educate southern England about what it means to eat Greek.

In addition to familiar dishes like souvlaki and stuffed peppers, the menu provides a glorious overview of some of the lesser-known stars of Greek cooking.

Dishes like grilled pork belly marinated in vinegar and honey, hilopita pasta with clams, chilli, garlic and ouzo, and a daring vegan moussaka prove that there's so much more to the menu.

However, despite the delights that Greek food has to offer, the restaurant faces an uphill battle. As co-owner Kyriakos Baxevanis explains to me over the telephone, our preconceptions often mean that diners don't know what to expect.

"A lot of people misrepresent Greek fast food with Greek cuisine," he tells me. "So, though the gyros and souvlaki etc do have a place, they don't represent the basic Mediterranean cuisine."

Baxevanis believes that the dominance of Greek fast food means many of us are unwilling to branch out. As he puts it, "A lot of businesses bring to the market the fast food version of Greek food."

This situation informs the message that sits at the heart of Nostos. As Baxevanis explains: "Our unique value proposition is really to educate the audience that Greek cuisine is a lot more complicated... We also want to educate the palates of our customers and patrons."

Because of this, Nostos is uniquely positioned as both a trend-setter and a traditionalist for Greek cooking. 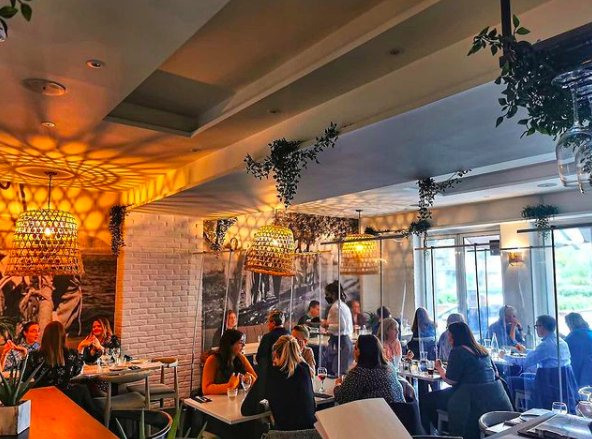 Nostos is on a mission to redefine Greek food (Credit: Instagram/Nostos_hove)

What we get wrong about Greek food

The pre-eminence of fast food is clearly a concern for Baxevanis. However, one of the more surprising misconceptions about Greek food generally is the lack of emphasis on vegetables.

Thanks to dishes like gyros and souvlaki, it's easy to assume that the cuisine is about as meat-heavy as it gets. In fact, as Baxevanis reveals, this couldn't be further from the truth.

READ MORE: Why Carousel May Be The Best Way To Take A Food Holiday In 2021

Speaking about the origins of traditional Greek dishes, he reveals: "There is a lot of vegetables. The majority of these recipes are mostly vegan and vegetarian, so meat didn't feature massively until the 1960s and 70s."

The vegetarian core of Greek cuisine runs throughout the Nostos experience. As well as the restaurant's signature vegan moussaka, the menu also includes traditional kolokithokeftedes – courgette balls made with fresh herbs, feta and saffron tzatziki.

Besides being absolutely delicious, these traditional plant-based morsels provide a window into the real origins of authentic Greek food.

However, even though our understanding of real Greek may be limited, Baxevanis does admit that there are some things well-known restaurants do get right. This is particularly true of the communal elements of the cuisine.

As he tells me: "The communal aspect of food comes from historical events... It's part of our DNA as well – we love being outside, we love having fun with our neighbours and families.

"So, that communal spirit is very much true and very much alive."

It's a spirit that Nostos itself, with its selection of small plates alongside individual mains, is also trying to capture. It just goes to show that, even though our appreciation of the whole cuisine needs some work, some elements of traditional Greek dining are incorruptible, whatever you're eating.