Pigs in blankets: a comprehensive history of our favourite Christmas snack

If you’d never seen pigs in blankets before, you’d probably think they sounded quite bonkers.

Quite literally pig tucked into a bed of pig, the slightly hedonistic little snack is a niche enough concept in itself, when you think about it.

However, they’re now so popular that there’s a dedicated Pigs In Blankets Day, and over 128 million of the festive staple are served on Christmas Day alone. 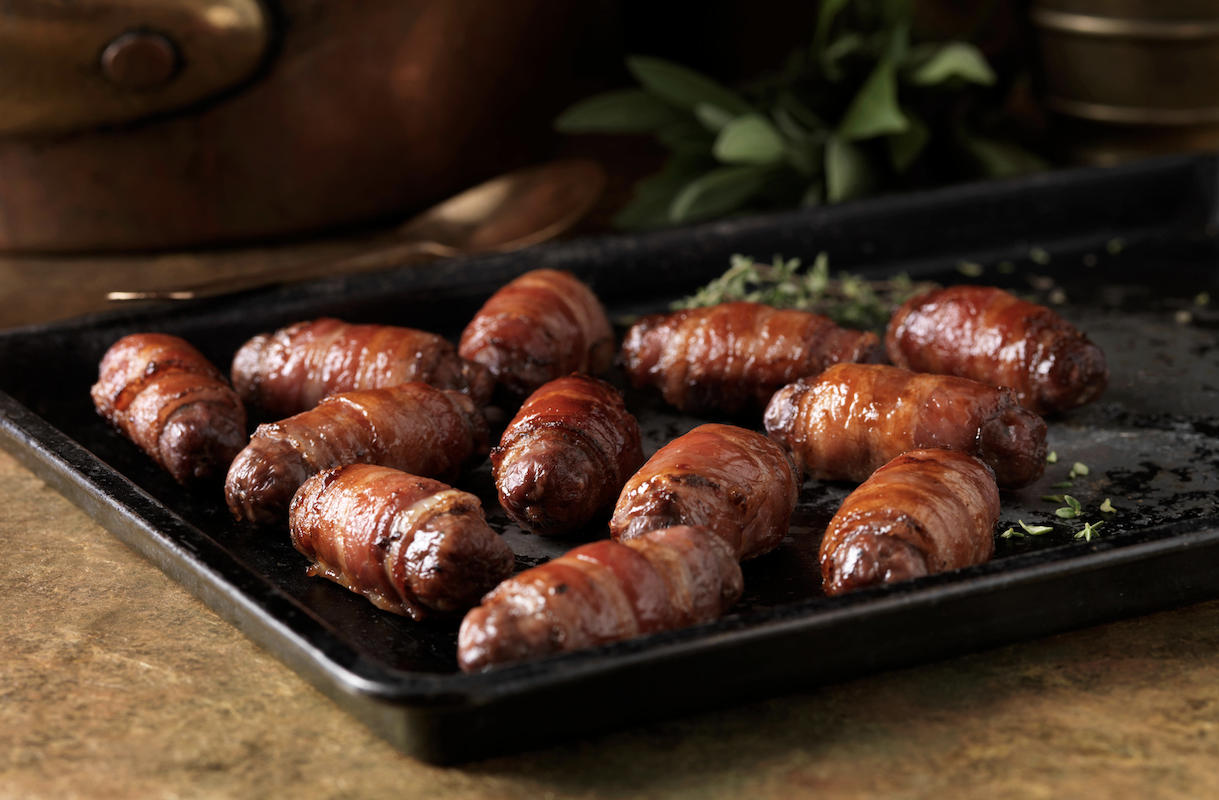 So great is the hype around the piggy little snack, that if it’s not found in its purest form, there’s bound to be a twisted version on your Christmas platter, be it a jumbo two metre version, one with a side of fondue, a spicy alternative, or even a vegan substitute.

But where did the humble pig in blanket come from? We’ve gone on a deep dive into the history of everyone’s favourite festive delicacy - and what we found is rather fascinating.

What actually are pigs in blankets?

Now, before we go any further, we have an important PSA. You might feel like you know what a pig in blanket is (duh, it’s a cocktail sausage wrapped In bacon, right?!) but here’s the kicker: they are actually defined differently all around the world, and the UK is rather alone in its bacon-wrapped culinary tradition.

For one, in the US, pigs in blankets (or 'pigs in a blanket', as they're more commonly dubbed) are typically small sausages wrapped not in bacon but in croissant or biscuit dough. 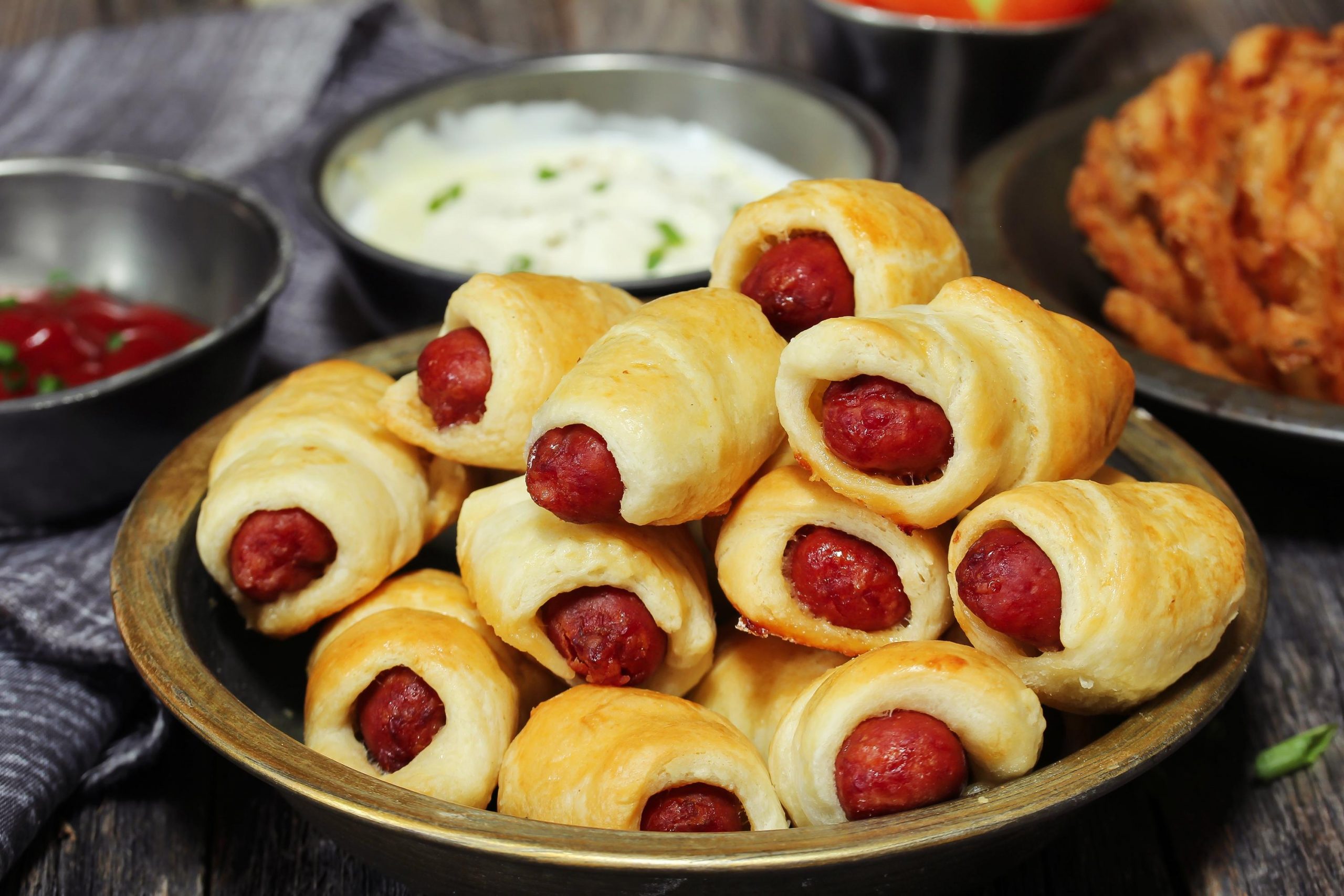 The fluffy pastry blankets are no doubt a lot warmer for the little piggies inside, but, as food critic Jay Rayner so eloquently put on Twitter: “THOSE ARE NOT PIGS IN BLANKETS. THEY’RE BLOODY SAUSAGE ROLLS.”

READ MORE: What food do people eat on Christmas Day around the world?

Turns out, the rest of the world disagrees.

In Israel, pigs in blankets are typically referred to as Moshe B'Tayva, or Moses in the Ark. Like Americans, their version of the festive snack sees puff pastry rolled over kosher hotdogs, and they’re typically served with ketchup.

Meanwhile, in Germany, the meaty treat is affectionately known as Würstchen im Schlafrock (aka ‘sausage in a dressing gown’), and it also comprises of a sausage wrapped in puff pastry, which cheese often added into the mix. 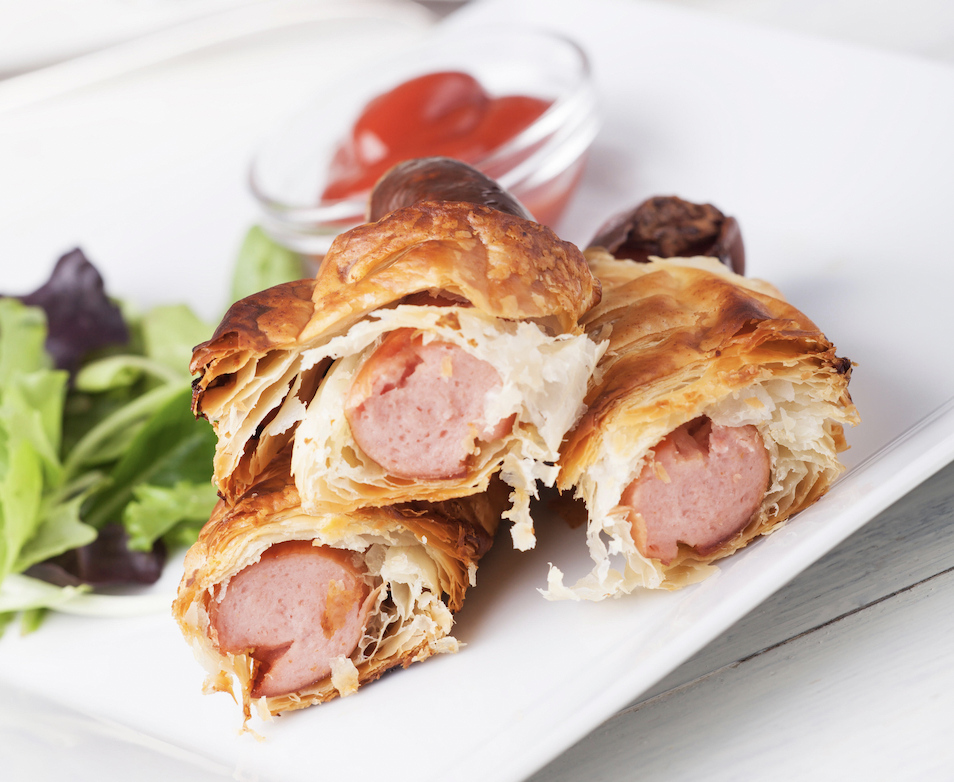 The variations of foreign pigs in blankets don't stop there, either. Mexican pigs in blankets are sausages wrapped in tortillas and deep fried in vegetable oil, and they’re known as "salchitaco" which is basically a mish-mash of the word salchicha (sausage) and taco (sausage taco).

And, China’s pig in blanket equivalent is known as Lap Cheong Bao and is a pastry encased sausage which is steamed rather than baked.

Anyone else literally floored by the sheer versatility of this piggy delicacy?!

The origins of pigs in blankets

There is some debate about when the very first pig in a blanket was invented.

The snack is mentioned in 1957 book, Betty Crocker’s ‘Cooking For Kids’ – using a frankfurter rather than a mini sausage – but we know the snack was around before this.

Historians have several theories about the exact origin of the pastry covered treat, but what they all agree on is that they were around for as long as a century before Mrs Crocker got her hands on them. 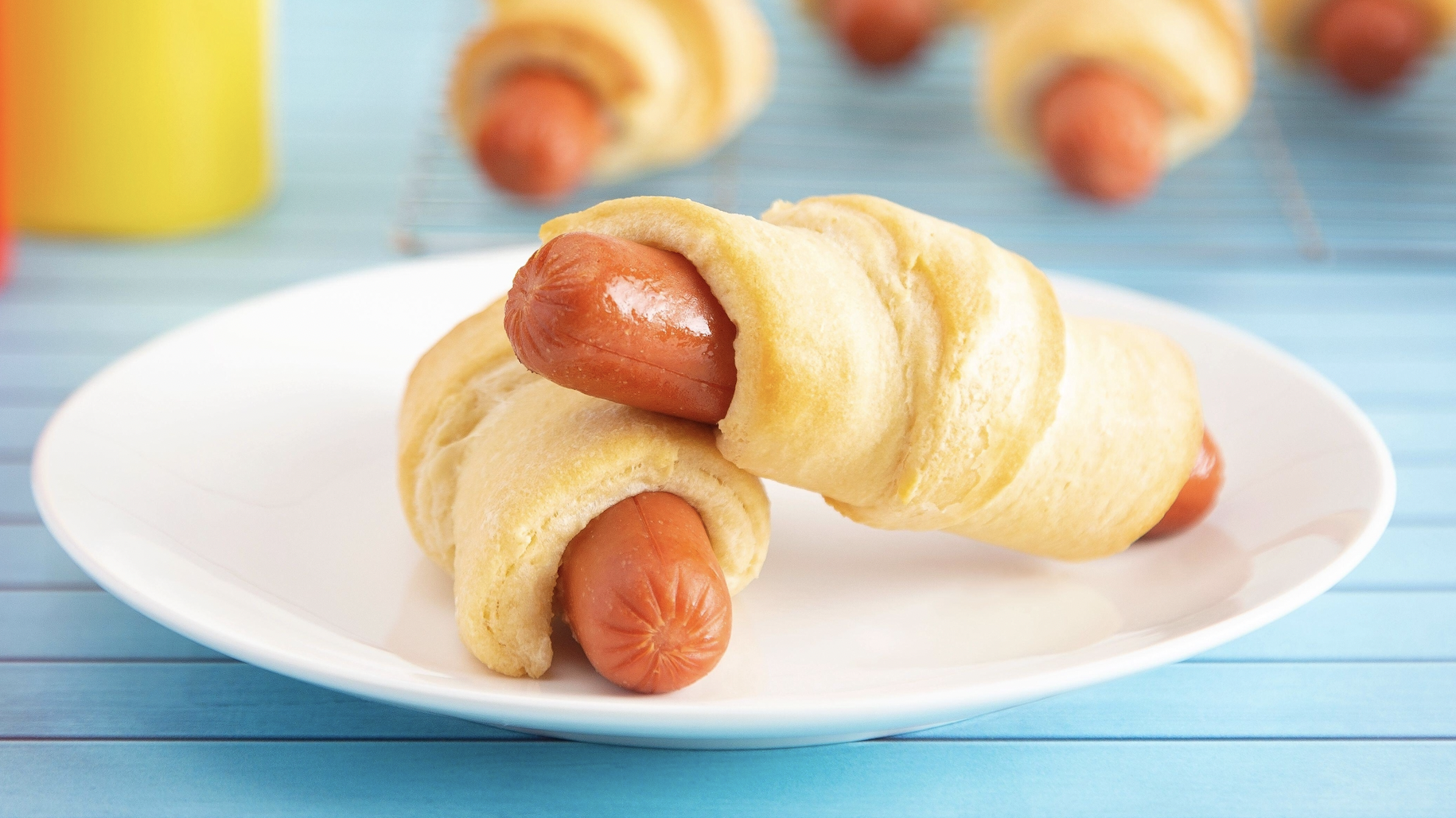 Pigs in blankets have evolved since Betty Crocker cooked them in the 80s (Credit: Alamy)

Some believe that the bite-sized treats were actually an Asian invention, seeing as there is a longstanding history of putting fish into pastry.

The theory is that Anglo-Saxons then got hold of this tradition and replaced the fish with red meat.

Over time, this became a snack that was adopted by British field workers, to keep them full up whilst working.

So, how did UK pigs in blankets transform into the bacon wrapped delights we know them as today?

It all started because in the US, the name pigs in blankets was also used to describe another dish (oysters drained and pickled, and wrapped in bacon) known today as ‘angels on horseback’. 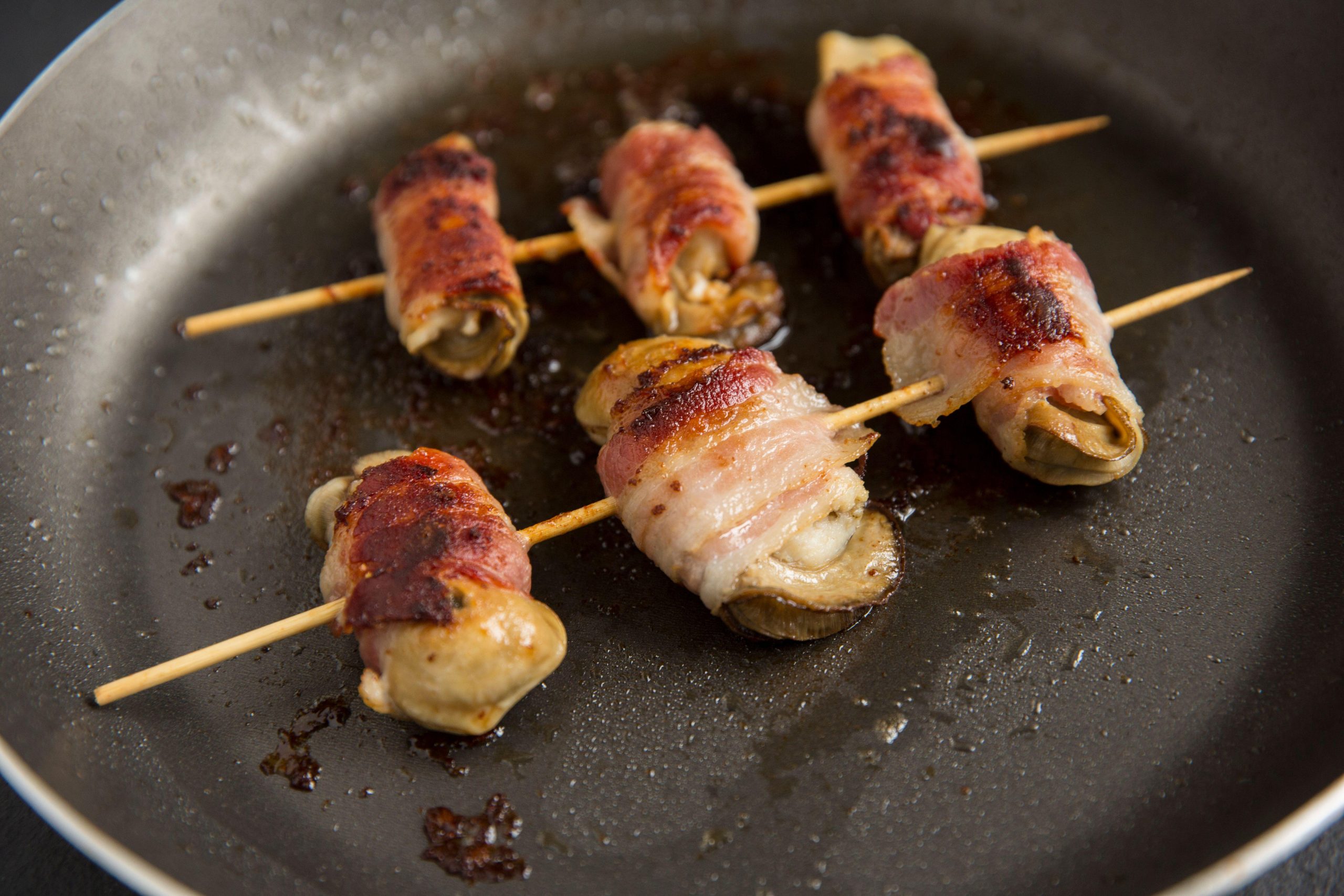 READ MORE: How to make the most of your Christmas leftovers

Recipes for this version of the snack could be found in the late 1800s up until the early 1900s, but the name was used interchangeably to describe both the oyster version and the meaty alternative, with some UK recipe books beginning to tout a sausage-based pigs in blankets as early as the 1920s.

It’s likely that here in the UK, we eventually realised that it made more sense to call the sausage-based recipes ‘pigs in blankets’, and so we phased the oysters out.

Thus, bacon wrapped pigs in blankets became the norm for us instead, and over time, recipes using pastry morphed into the sausage roll as we know it.

Phew, that was quite a history lesson, wasn’t it?! Anyone else hungry?