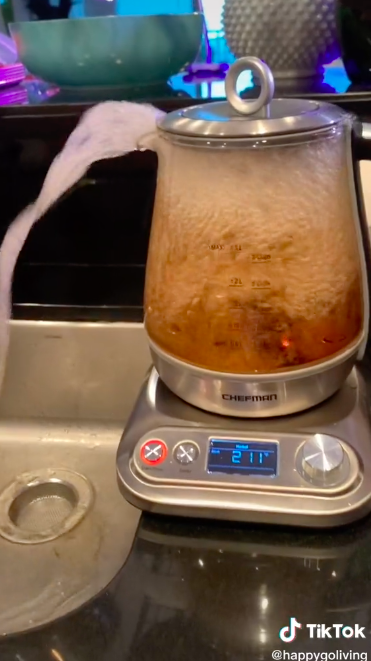 The viral video has over 4 million views (Credit: TikTok/happygoliving)

American woman attempts to make a cup of tea

In the footage, @happygoliving is seen boiling water in her "amazing new electric kettle". However, as she informs the audience, the design seems to have a "major flaw".

After a few seconds of boiling, the water within the kettle froths over, cascading into a nearby sink. @happygoliving, meanwhile, seems genuinely baffled by the issue.

The confused woman goes on to ask: "So, why would they make it like this? What is the purpose?"

She then castigates the kettle: “Yeah, you better turn yourself off. Water everywhere.”

Ordinarily, a kettle the overflows every time you turn it on would obviously not be ideal. However, as hundreds of people have pointed out in the comments, the problem is much more straightforward than it seems. 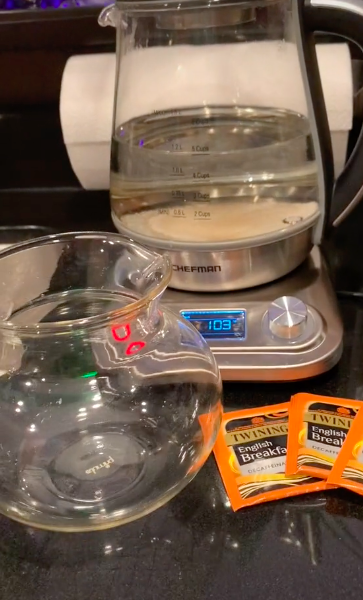 The woman has since posted several videos documenting her tea struggles (Credit: TikTok/happygoliving)

Despite the original poster's confusion, the issue with the kettle was actually entirely avoidable. Namely, the problem was that she put tea in the actual kettle before boiling it.

Needless to say, many British tea experts were not happy with her approach.

One despairingly wrote: “Americans get a kettle and this is what they do.”

Another angrily added, "WHY DID YOU PUT TEA IN THE KETTLE?” A third tentatively queried, "The Brit in me is severely confused and kinda scared... are... Americans okay...?"

Despite the incredulity of the comments section, @happygoliving appears to be undissuaded from conducting her tea experiments.

In a series of further TikTok videos, the determined American has documented more struggles with her new kettle, complaining that unless she puts the tea in the machine, she doesn't get enough for more than one cup.

In later clips, @happygoliving is seen trying to use a water jug in place of a teapot and using coconut milk instead of dairy. At each attempt, the internet is typically disparaging, despite her best efforts.

The trials and tribulations of @happygoliving tell us two things. Firstly, making a cup of tea is clearly not as straightforward as many of us assume.

Secondly, if you're looking for clear, precise instructions addressing something you're struggling with, don't turn to TikTok. It will only end in tear for everybody involved.