The humble Christmas sandwich may have started as a haphazard amalgamation of leftovers pulled together on Boxing Day, but nowadays pretty much every high-street establishment has its own version on shelves from mid-November at the very latest.

What was once a sloppy affair, made at home after a few eggnogs, has become a Christmas right-of-passage – purchased on lunch breaks and enjoyed in the weeks before the Big Day by millions around the world.

Naturally, as the festive sarnie has grown in popularity, each brand has vied to outdo the other with a combination of flavours more Christmassy than the last.

But getting the balance right is a fine art: it needs just the right amount of cranberry sweetness; stuffing that’s packed with flavour (NOT claggy and bland); and perfectly moist turkey (or alternative meat), which is a challenge in itself.

Only one of these elements needs to be off for the sandwich to turn into the festive mouthful from hell. However, when it's done right, there really is nothing better.

So, who has nailed it this year? 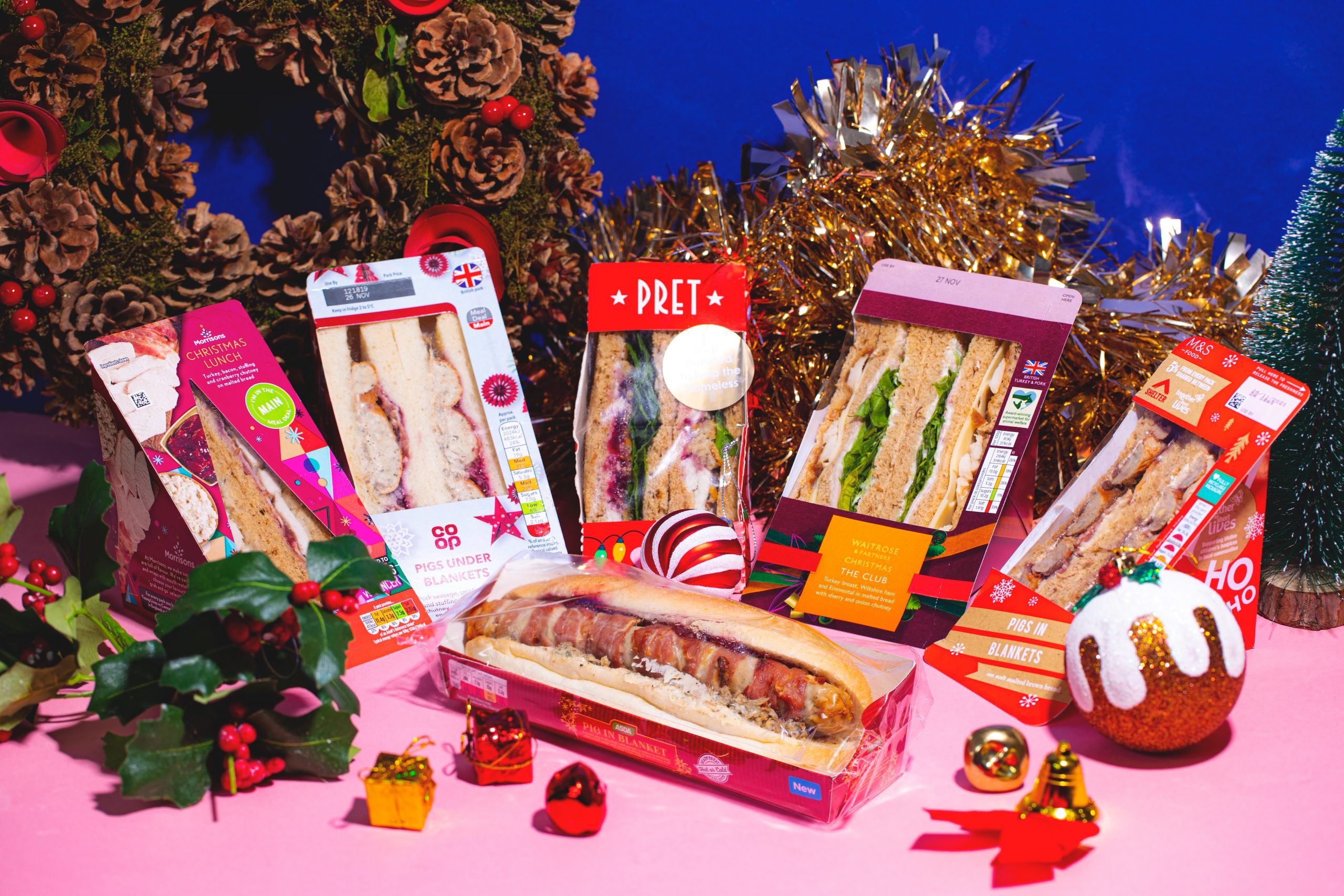 We tried a massive stack of Christmas sandwiches so you don't have to (Credit: Twisted)

READ MORE: What do people eat on Christmas Day around the world?

Here at Twisted we rate our discerning tastebuds pretty highly – it is our job, after all. So, our whole team got together to blind-taste 10 of the ‘hero’ Christmas sandwiches on offer from high-street brands in 2021.

In the interest of fairness, we had no idea where any of the sandwiches were from, all we were considering were two essential factors: Taste, and Overall Festive Vibes.

Ordered from bottom to top, here’s our analysis of this year's selection:

What is it: “Roast beef, maize polenta crusted root vegetables, rosemary and turkey gravy mayonnaise and spinach in a rosemary and thyme sub roll.” 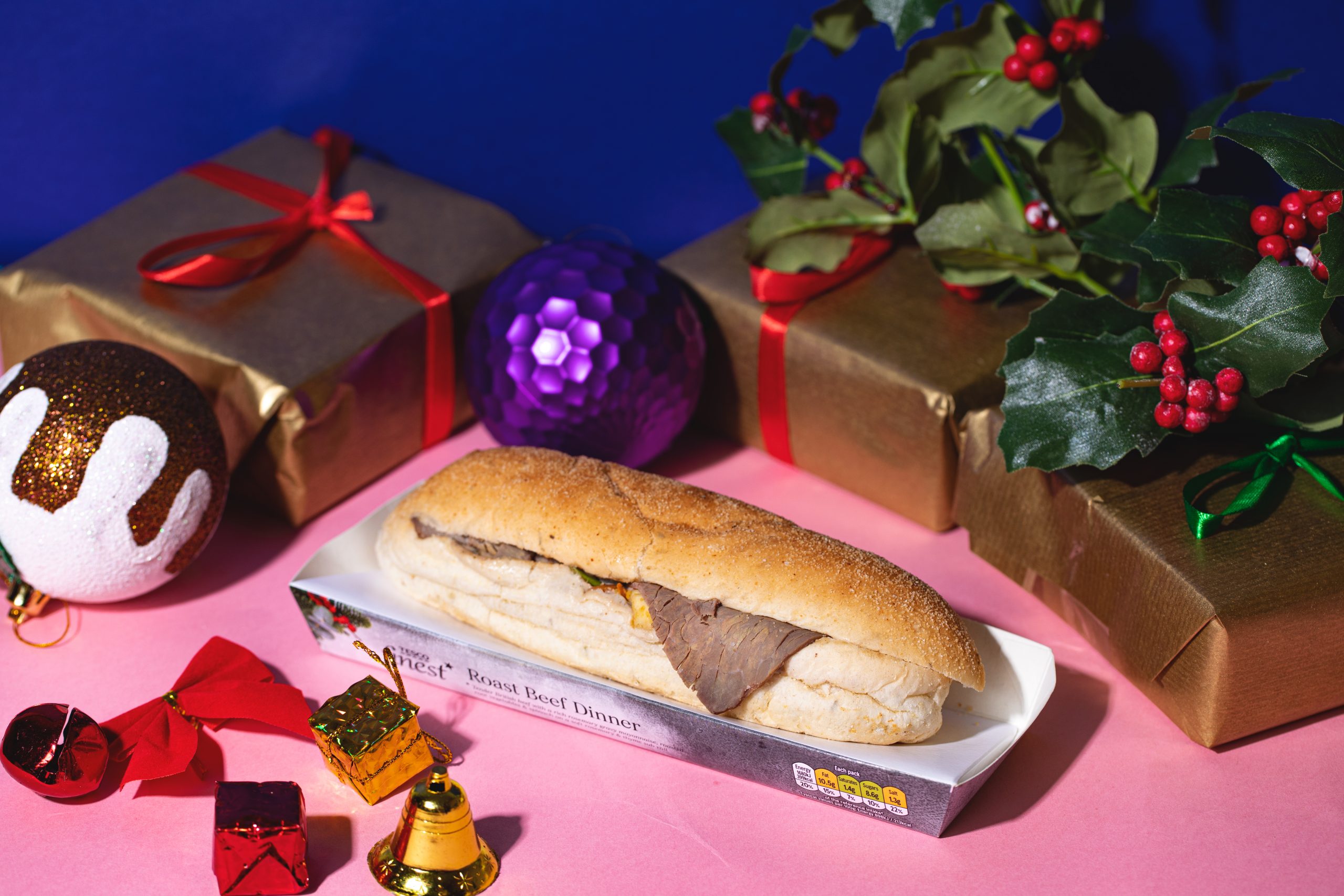 Twisted's verdict: This sarnie promises a lot – it’s basically a roast dinner in a roll, after all – but it has to be said, we’ve seen prettier sandwiches in our time.

You know what they say, 'you eat with your eyes', and whether it was the pale sub or the grey shaving of beef dribbling out the centre, we have to concur that this one just didn't draw us in.

We're not a shallow bunch at Twisted, though, and so we tucked in anyway. There was praise for the fact the crispy root veg harked back to the Christmas roast, whilst Spencer, our junior food producer, commended Tesco for taking the humble festive sub “in a different direction”.

Despite this, the verdict was that this sandwich could have been improved with crisper bread, a revamped aesthetic and some punchier Christmas flavour notes in the mayo.

When it comes to Christmas sandwiches, straying from turkey or pork is always a gamble, and in this case, it didn't come up trumps.

What is it: “Turkey breast sandwich with cranberry chutney, smoked bacon, pork, sage and onion stuffing and seasoned mayonnaise served on malted bread.” 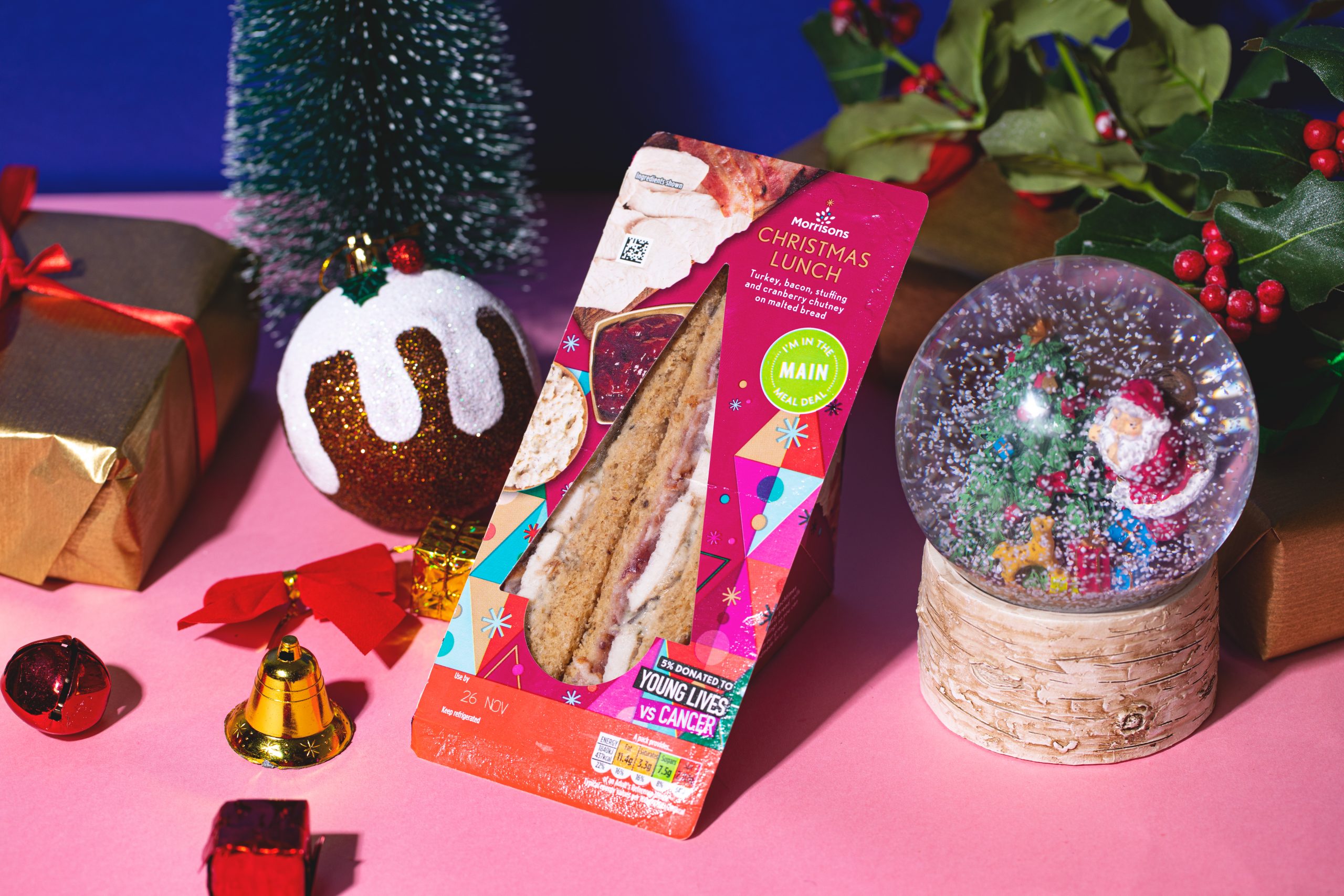 Twisted verdict: As far as Christmas sandwiches go, this does what it says on the tin.

The team noted that “you could taste all the individual elements” expected on the Christmas dinner table – an essential attribute of any festive sarnie.

However, the balance could have been improved with a little less sage (some of the team found it somewhat overpowering) and a thicker wad of stuffing would have made the whole mouthful a little less "slimy."

Was this sandwich inspired? Not really. But it wasn't offensive, either. The general verdict was that this was an okay sarnie, but we wouldn't rush to buy it again.

What is it: “Pork sausage, mayonnaise, cranberry sauce, pork, sage and onion stuffing and smoked bacon on white bread”. 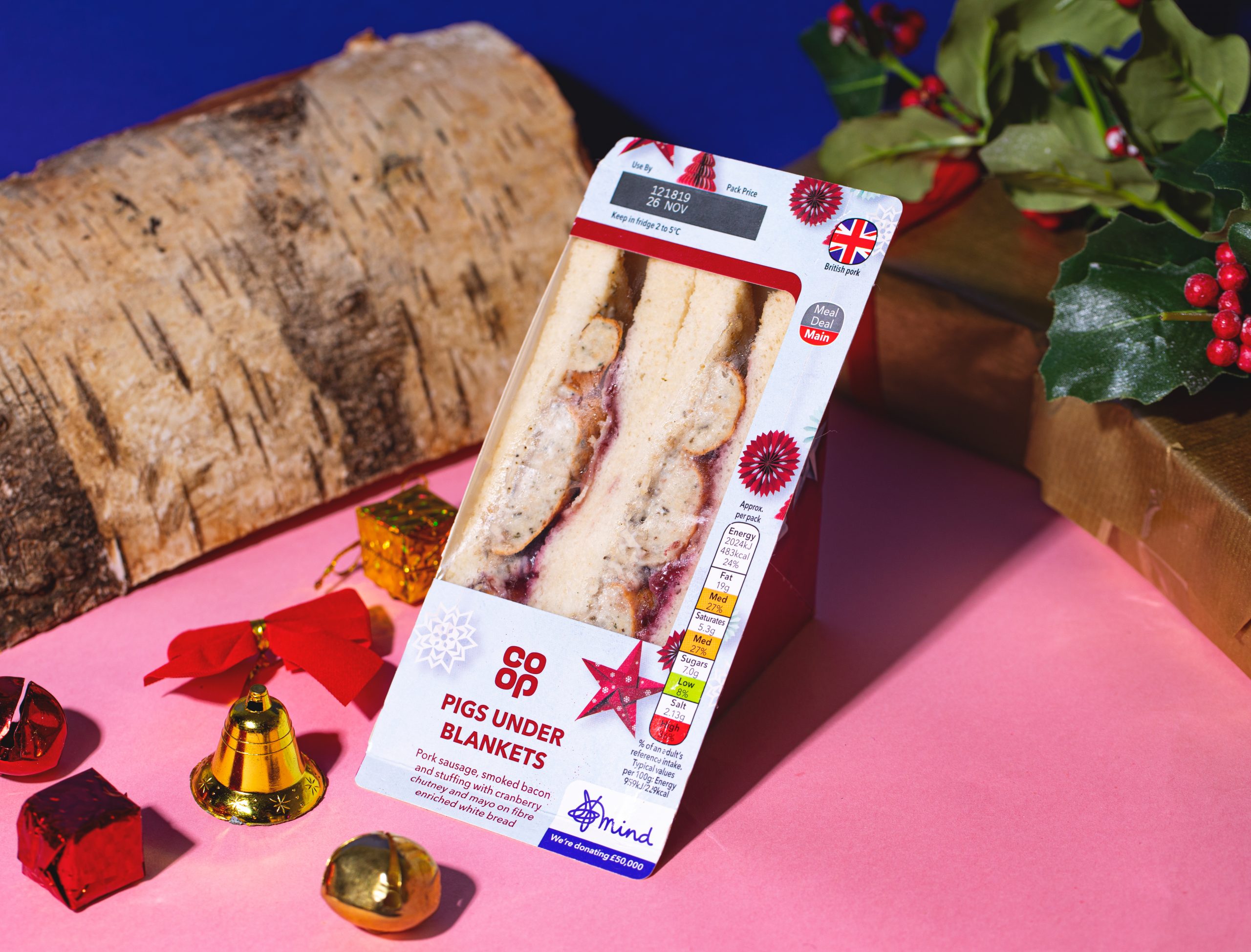 Twisted verdict: This sandwich won points for straying from the traditional turkey offering, and giving a nod to everyone’s favourite festive snack.

However, the term Pigs Under Blankets was used for a reason. Instead of bacon wrapped sausages, we were treated to chopped up sausage topped with a layer of bacon – a somewhat “uninspired” and deconstructed nod to the original.

Some of the team weren’t enamoured by the sausage itself, and others wished there were a few more festive flavours (as Twisted creative director, Tom, put it, “pigs in blankets a Christmas dinner do not make”.)

All gripes aside, the general consensus was that the somewhat simplistic flavours that were there, worked. Oh, and Cian, our senior video editor, mused: “The shit soft bread adds a lot", which was nice of him.

So, there you have it.

What is it: “Shredded ham hock, turkey, cranberry sauce, a potato, leek, cabbage & sprout hash in a sourdough bloomer topped with cheesy sauce and cranberries.” 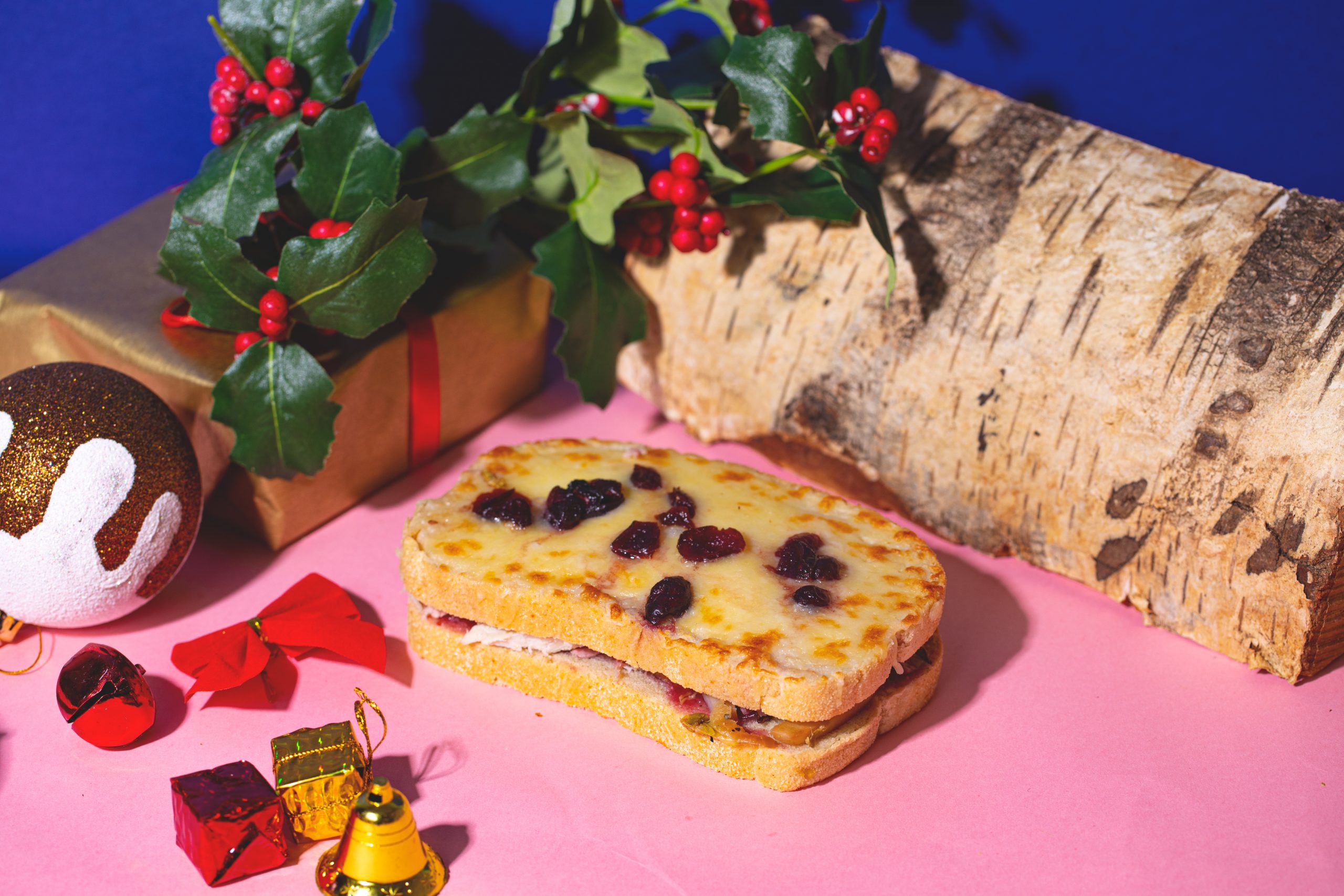 Twisted verdict: This offering divided the team, which explains its middle of the road score.

It bagged universal praise for its hefty use of filling, for the cheesy sourdough bread and for being warm (because, let's face it, a toastie is always the infinitely better option).

Bonus points were also awarded for the interesting inclusion of potato, leek, cabbage and sprouts here, as well as the overall inventiveness – we like to see versatility!

Some of the more cynical members of our team thought that the festive flavours didn’t come through as much as they would have liked, with one referencing the higher price point, and another dubbing it an “average toastie in a Santa hat.”

An average toastie it may well have been, but sometimes that's just what the doctor ordered.

What is it: “A sandwich made with turkey breast, Emmental cheese, Wiltshire cured ham and sherry and onion chutney in sliced malted bread.” 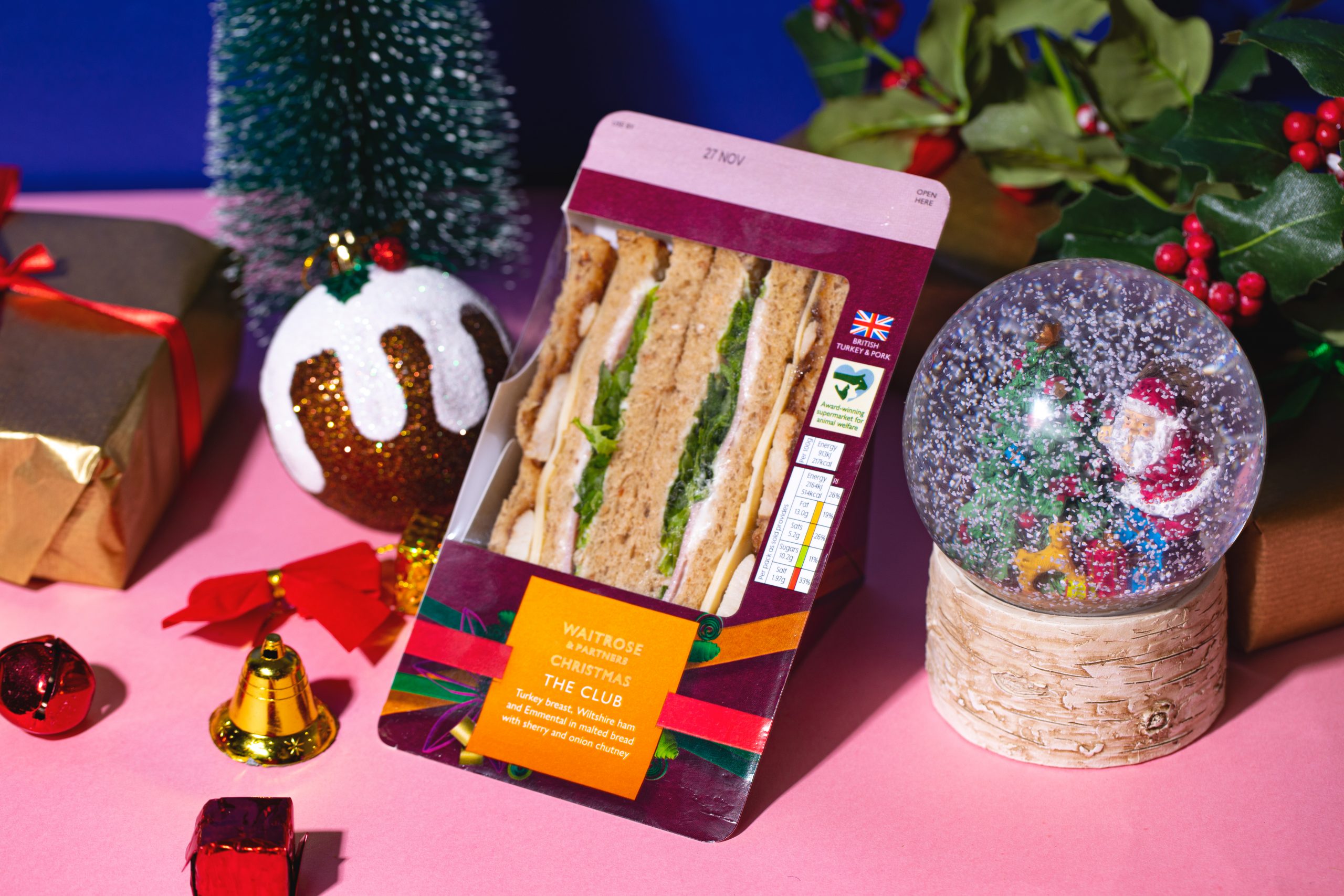 Twisted verdict: In our eyes, this was a perfectly nice ham and cheese sandwich, but it has to be said that the Christmassy flavours didn't slap you in the face.

That’s not to diminish the good points, though. There was high praise for the addition of Emmental into the mix here, and the sweet onion chutney also got a special mention.

Obviously, the fact there are three layers to this sandwich also scores major points...except in the eyes of one sandwich taster, who controversially declared there was “too much bread”.

Is that even a thing?! Ignore them.

If you’re hoping to give the turkey a miss this year, Waitrose could be your guy. 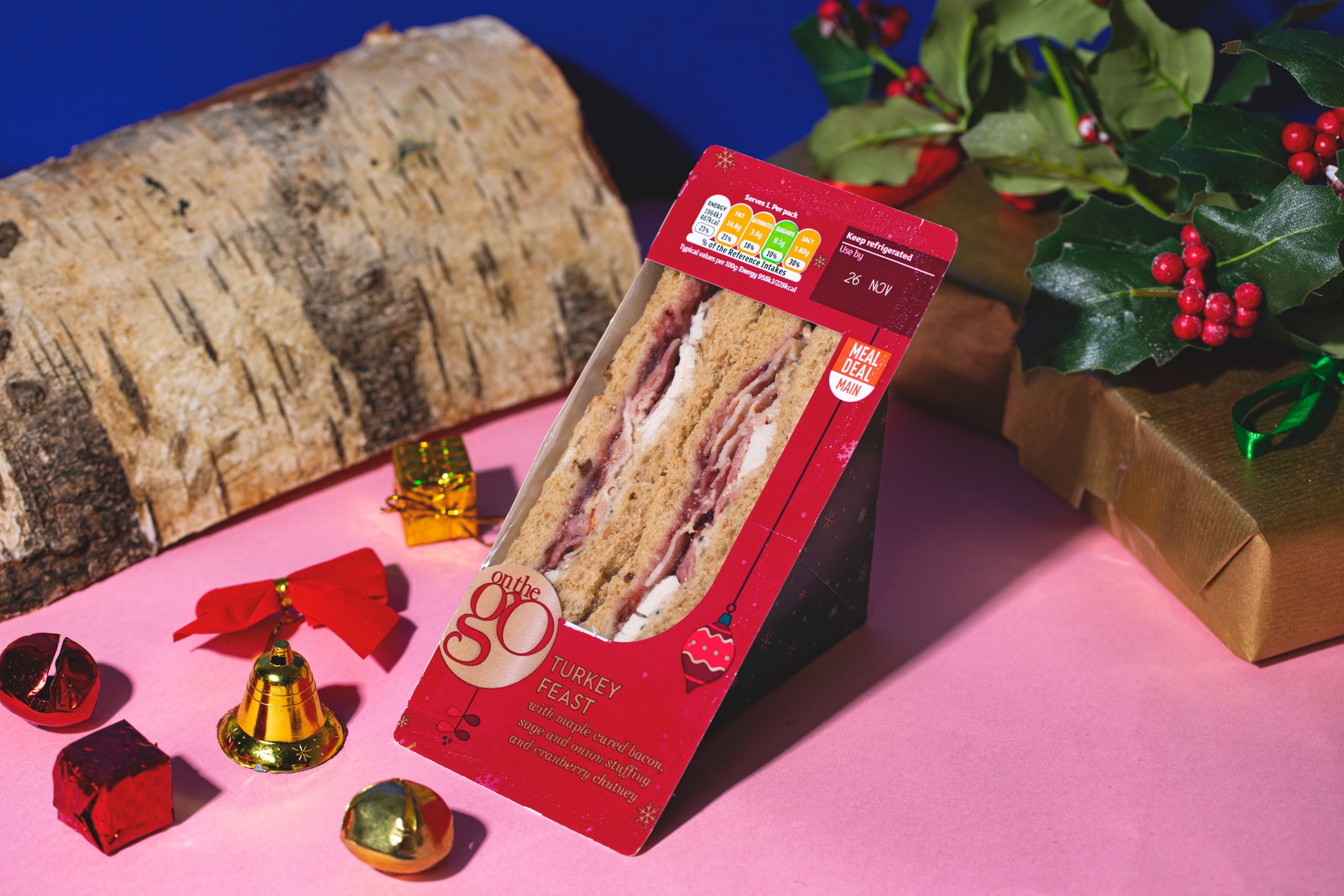 Twisted verdict: Sainsbury’s presented us with a seemingly standard turkey sandwich, but it nailed each component, and for that, it received predominantly positive feedback.

Murray, our videographer, declared it was “all [he] could ask for from a Christmas sandwich”, while there was also praise for the “beefed out” filling, which comprised of well-seasoned turkey, a hefty chunk of stuffing and just the right amount of cranberry chutney.

Sure, this sandwich is basic, but it offers undeniably festive flavours, done well.

What is it: “Malted brown bread filled with outdoor-bred pork sausage and bacon, along with a gravy-style mayo, a sage, port and red onion chutney and caramelised onions..” 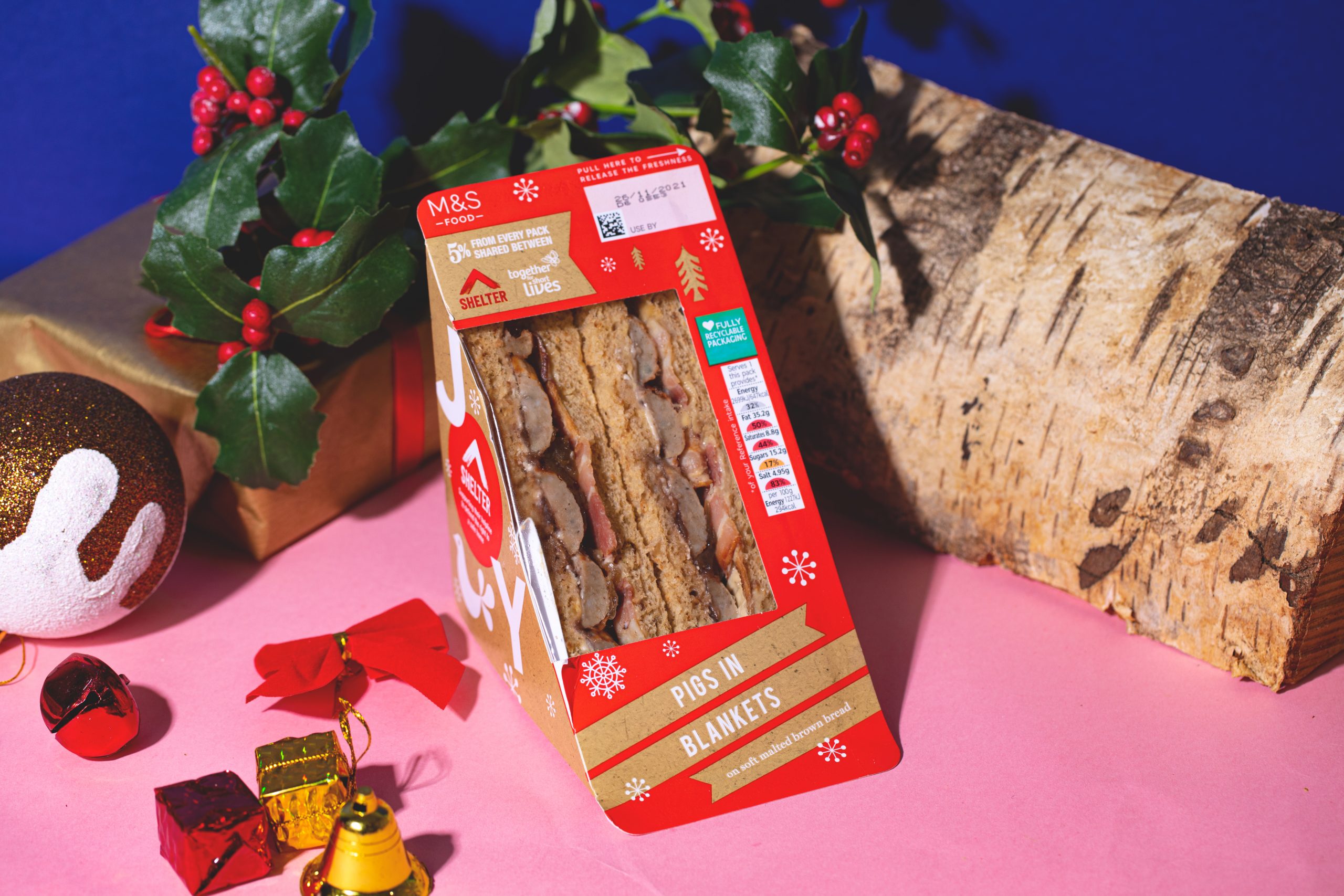 Twisted verdict: This wasn’t the first Pigs In Blankets sandwich of the day, and as you can imagine, the team were starting to experience sausage fatigue. However, it's testament to M&S that this was still one of the standout faves.

Once again, we had pigs under blankets here (despite the rather misleading name) - and some of the team wanted more traditional Christmas dinner flavour notes in there. However, all was forgiven because of how expertly the ingredients were balanced.

Too often Christmas sandwiches can be dry and uninspired, but the port and red onion chutney was the real star of the show here, winning special mentions from the vast majority of the Twisted team.

Spencer noted the chutney "added a moisture that others were lacking”, whilst creative culinary lead Tara praised the quality of the sausages, too.

What is it: “An 8-inch pig in blanket fills a brioche sub roll, topped with pork, sage & onion stuffing, festive mayonnaise, and a vibrant cranberry sauce." 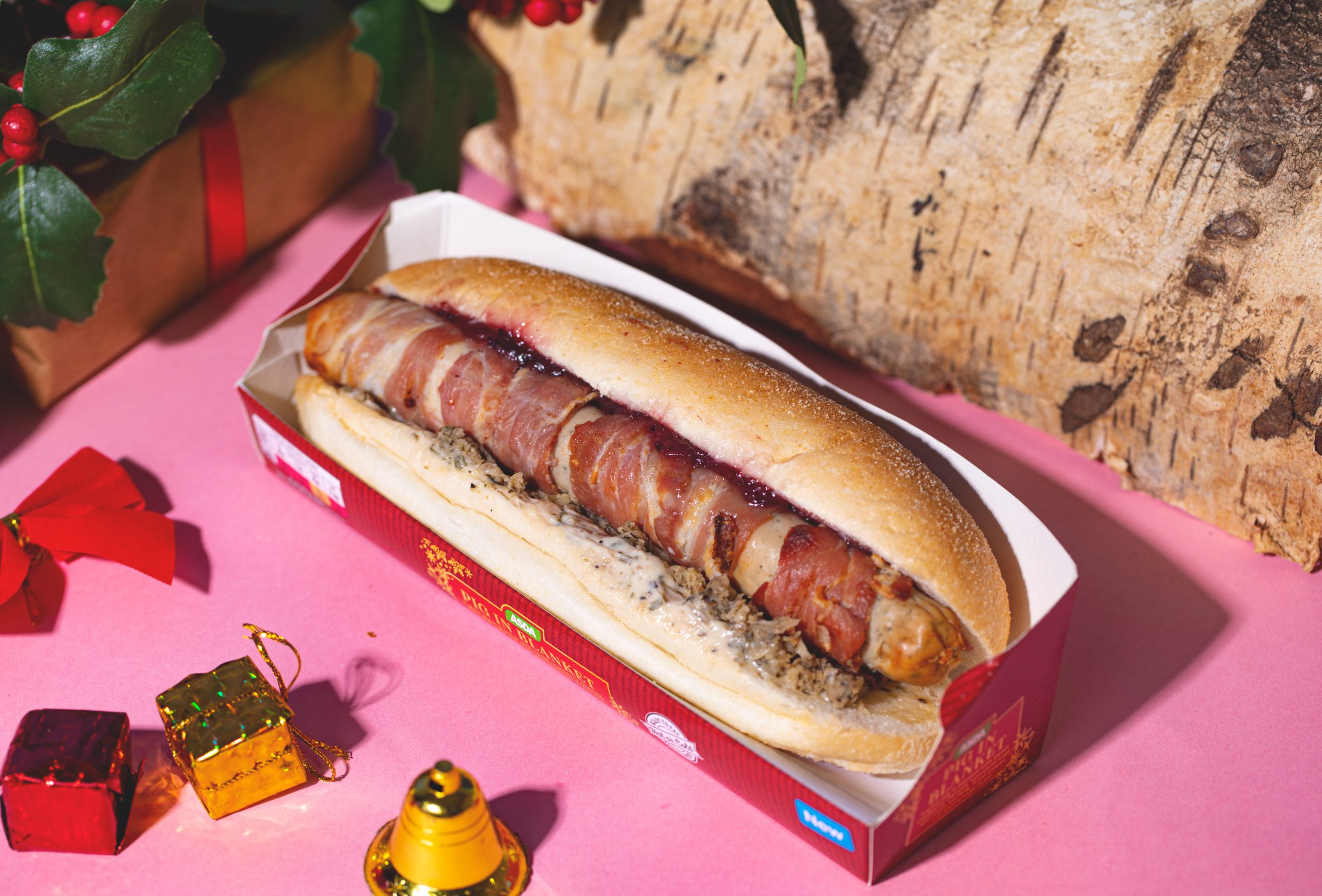 Twisted verdict: Nobody can deny that ASDA's Christmas sandwich is quite the spectacle, thanks to the addition of an eight (yes, eight) inch pig in a blanket.

Tying with M&S in third place, this Christmas sandwich didn’t quite measure up when it came to taste, but made up for it in festivity and overall impressiveness.

A literal baguette stuffed with a super-long bacon wrapped sausage, ASDA’s offering certainly had the wow factor. No pigs under blankets to be seen here, thank you very much.

Our senior food producer, Hugh, described it as a “pigs in blanket hot dog” (very Twisted, if you ask us), whilst the sub also garnered praise for its texture, and the healthy dollop of sauce dispersed throughout.

It has to be noted that the size was a little daunting, and most of the team thought a crispier baguette could have elevated this sarnie to the next level, but all the same, kudos for thinking outside the box.

READ MORE: What to do with Christmas leftovers: 6 top tips

What is it: “Thick slices of British turkey with port & orange cranberry sauce, herby pork stuffing and baby spinach leaves. Finished with a dab of free range mayo and crispy onions”. 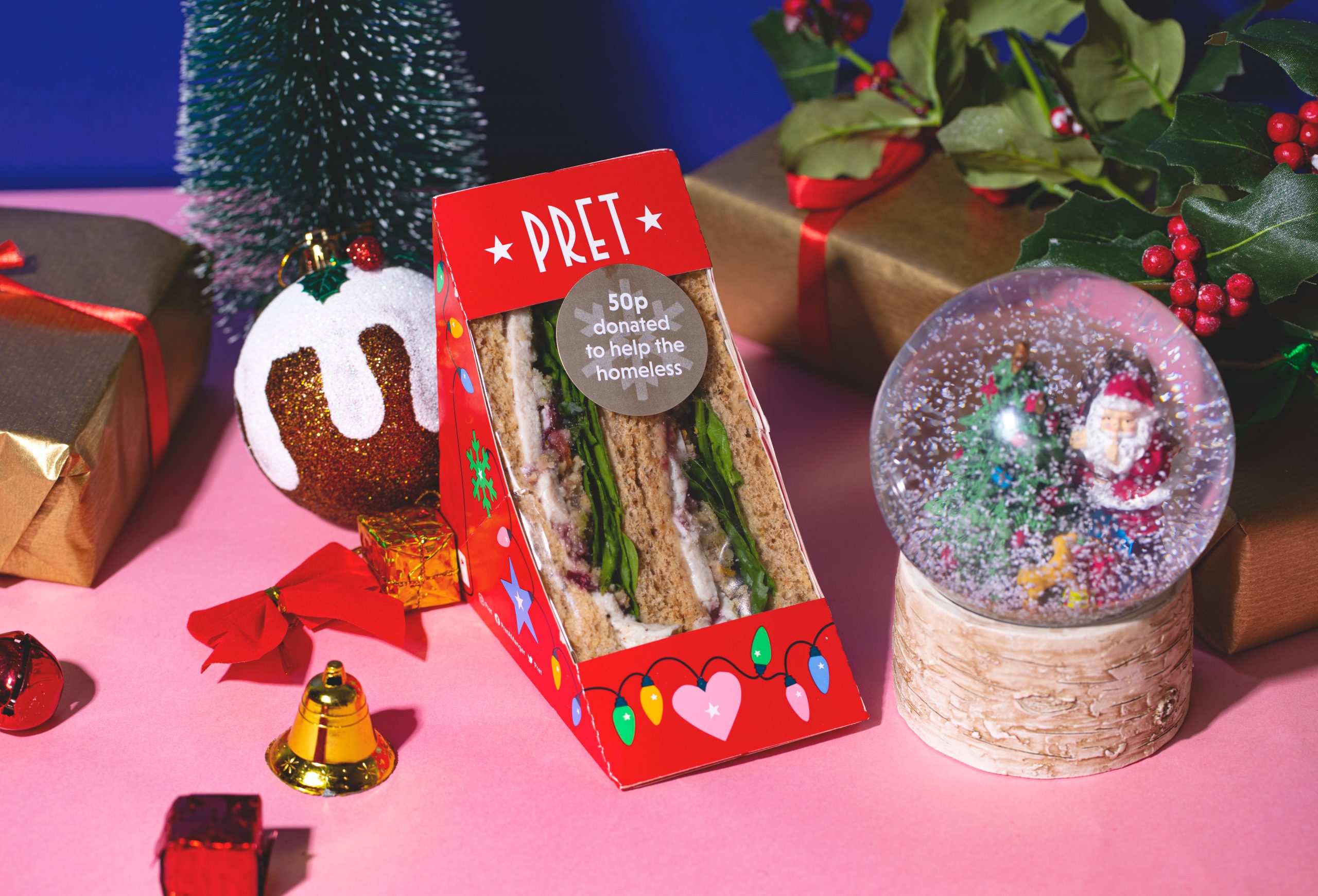 Twisted verdict: Is it any wonder Pret A Manger made it so close to the top of the leader board?

The high-street sandwich chain has become somewhat synonymous with Christmas over the years, and that’s because they know how to make a damn good sarnie.

After several rather one-note sandos, the herby stuffing was a standout here, as was the sharp and yet sweet port, orange and cranberry sauce, which complimented the turkey beautifully.

There was a bit of a divide when it came to the use of greens. Some of the team thought they were a welcome addition, adding a splash of colour and an extra flavour, amongst all the beige, whilst others thought the spinach's inclusion was pointless and the leafiness dominated.

Overall, though, the whole thing maintained “very Christmas vibes”, as Cian so eloquently put it.

What is it: “British turkey with smoked bacon, sage & onion stuffing and cranberry sauce in cheese topped white bread.” 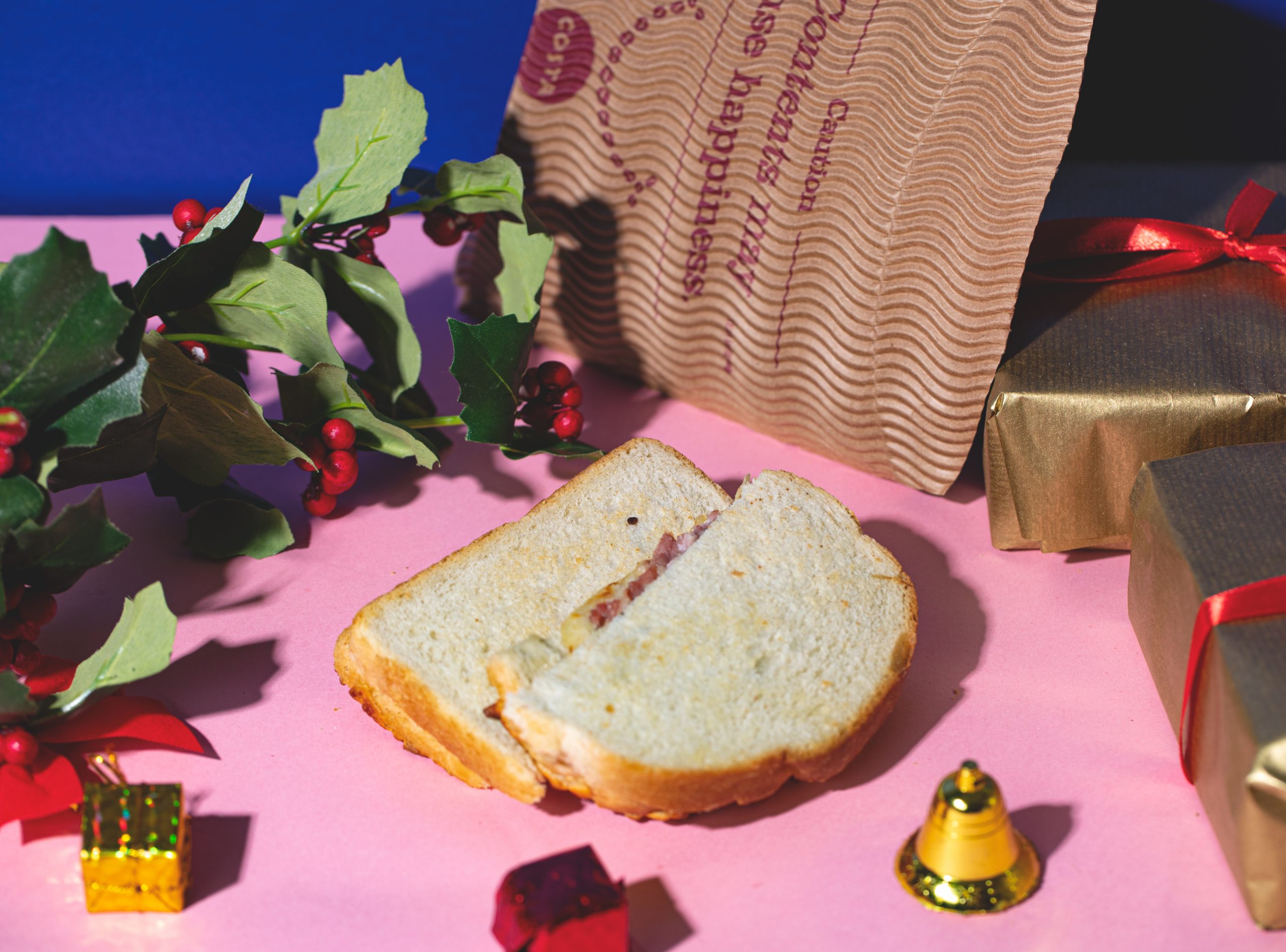 Twisted verdict: So it turns out the best Christmas sandwich is actually a toastie, in the eyes of the Twisted team.

This ultimately won for one reason: its simplicity. We were looking for a Christmas sandwich that stood out from the crowds, whilst also offering up the key festive flavours you’d expect – and this delivered.

Not too dissimilar to a croque monsieur, this sandwich may not have screamed Christmas with jingle bells and whistles, but all the elements were there, the ratios were right, and every ingredient had its moment to shine.

The cheesy bread didn’t overwhelm, but instead subtly complemented the turkey, bacon and stuffing. Meanwhile, the cranberry – whilst subtle – offered a welcome nod to the holidays.

Listen, we’re not saying this is the best Christmas sandwich ever. There are independent sandwich shops which quite frankly thrash all of these on the ‘reg. But if you’re looking to grab a sandwich on the high-street then there are certainly some strong contenders out there.

And with that, we wish you a merry lunch-break!