An Australian restaurant is redefining decadence after introducing an entirely deep-fried burger to its menu.

Dandenong Pavilion in Victoria specialises in a delicious, yet relatively understated range of burgers. This new feature, however, is a completely different animal to what's usually on the menu.

No wonder customers are seriously excited about giving it a go. 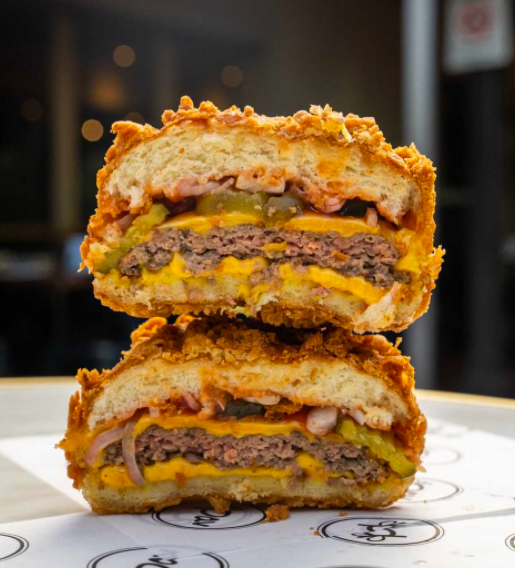 The new dish at Dandenong Pavilion is as impressive as it is intimidating.

Dubbed the Batter Up, the burger is ostensibly a "classic American cheeseburger with a twist," according to the restaurant's Instagram page.

In this case, the twist is the total coating of crispy batter, essentially turning the entire sandwich into an over-indulgent giant scotch egg.

As Dandenong Pavilion explains on its Instagram, the dish also features "one beef patty, double cheddar cheese 🧀 , onion, pickles, tomato sauce & mustard in a toasted milk bun battered and deep-fried." This is all accompanied by a portion of paprika salted chips.

The inclusion of a completely deep-fried sandwich represents a serious step change for the restaurant. In fact, Dandenong Pavilion has previously won the Best Burgers in Melbourne award in 2015/16.

If nothing else, this show's that there's more to the menu than the occasional calorie bomb.

However, the introduction of the Batter Up proves that there's a serious appetite for ridiculous sandwiches, even if they only appear every once in a while.

Predictably, the fan response to the sandwich is seriously excited.

As one fan on Instagram wrote, "Looking forward to this." A second simply added, "Ohhhh mumma". Clearly, people are on board with the concept.

One customer went even further, using the new sandwich as an opportunity to throw down the gauntlet to another of Australia's most popular burger spots. As they commented, "Looks great! @rudeboyburger whatchya think? 😜 must i go decide whose is better!!??

As social media proves, there is no shortage of indulgent burger options available in the modern fast food scene. By deep-frying the entire bun, however, Dandenong Pavilion really is raising the game for everyone else.