Fall is very much upon us, which means that Oktoberfest celebrations are soon to be underway!

A quintessential part of Bavarian culture since 1810, Oktoberfest began with a fair to celebrate the marriage of the German King Ludwig I. Nowadays, it's the perfect excuse to enjoy a beer or four.

And, like any good fair, the food is just as important as the drink - and any beer lover will tell you that a good stein is best consumed on a full stomach or alongside a tasty, filling snack or meal. 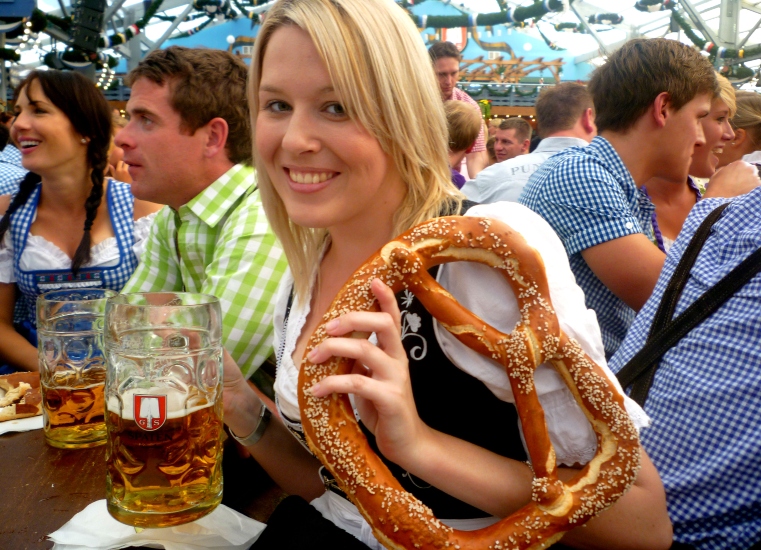 However, with the ongoing pandemic still affecting our lives, attending traditional Oktoberfest events is not going to be an option for everyone once again. But don't worry, Twisted is on hand with some fantastic recipes to make your Oktoberfest 2021 one to remember - regardless of how you celebrate.

(Oh, and the following recipes can all be found in Twisted: The Cookbook).

Sometimes when you're sitting down to have a drink, you want something that's not only going to effectively line your stomach but tantalize your tastebuds too, which is why I recommend the Chicken Ceasar schnitzel sandwich for Oktoberfest 2021.

Like so many of the recipes you're about to read, you will need to begin by preheating the oven to 180℃ before breaking six slices of white bread into bits onto a baking tray and baking for around eight minutes until dry and golden. After this, blitz them into fine crumbs using a food processor.

Large chicken breasts should then be cut in half horizontally and then placed between two sheets of clingfilm and beat with a rolling pin until thin. 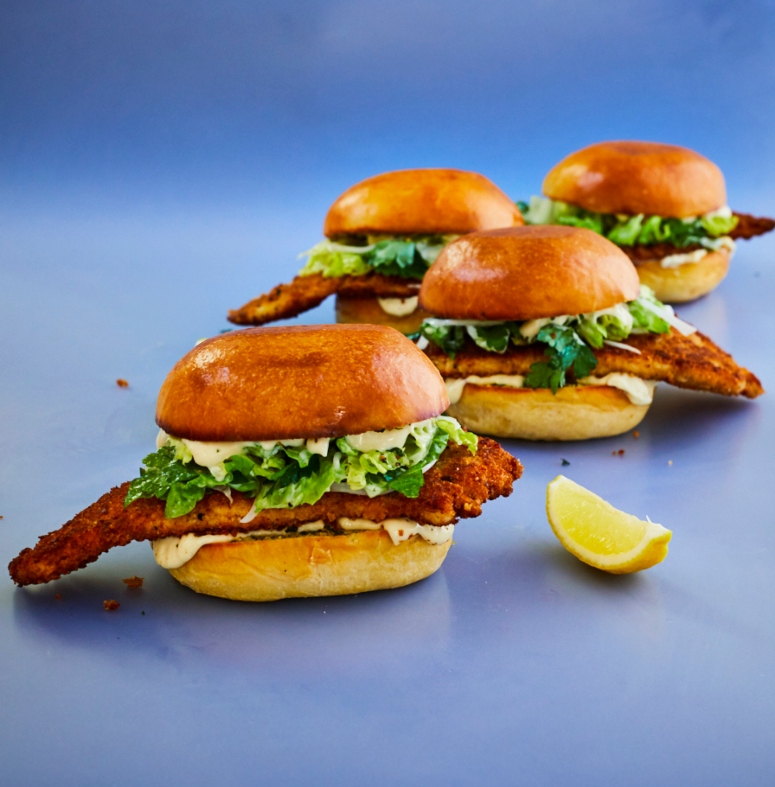 Dip the chicken breasts into the flour and then shake off the excess before adding them into the egg mixture and then the breadcrumbs to cover thoroughly. The breasts should then be set aside for ten minutes.

A thinly sliced onion should then be coated in lemon juice and allowed to marinate for 10 minutes.

You should then heat 5mm of oil in a heavy frying pan and fry the chicken pieces until they are golden brown on each side.

After this, put the breaded chicken into buns with lettuce and add a few tablespoons of Ceaser dressing and the onion. A top tip is coating each side of the bun with garlic butter to make your meal even tastier!

Fries are a fast food staple, and people want them after a night out for a good reason. But often, they are boring, and at worst served with a little salt and pepper and at best a sauce or two, but not in Twisted's creations.

This Oktoberfest, fries can very much be a part of the main event, and Twisted's two loaded fries recipes will keep you and your fests more than satisfied.

Up first are the BBQ chicken-loaded fries, which you can make by preheating your oven to 160℃. After this, pop four chicken breasts into a roasting ban and add 400ml BBQ sauce before baking for an hour.

Be sure to flip the chicken after 30 minutes, and afterward, shred it before seasoning.

The next step involves increasing your oven's temperature to 200℃ and cooking 1kg of frozen fries. Once completed, pop them onto a deep baking tray and add your shredded chicken and BBQ sauce.

You're now ready to top the whole thing with cheese before putting it back in the oven for ten minutes.

In the meantime, fry 200g of bacon until crisp and chop it up. Once your cheese is nicely melted, add the crispy bacon on top and three tablespoons of pickled jalapeños. And voilà! You have BBQ chicken-loaded fries. 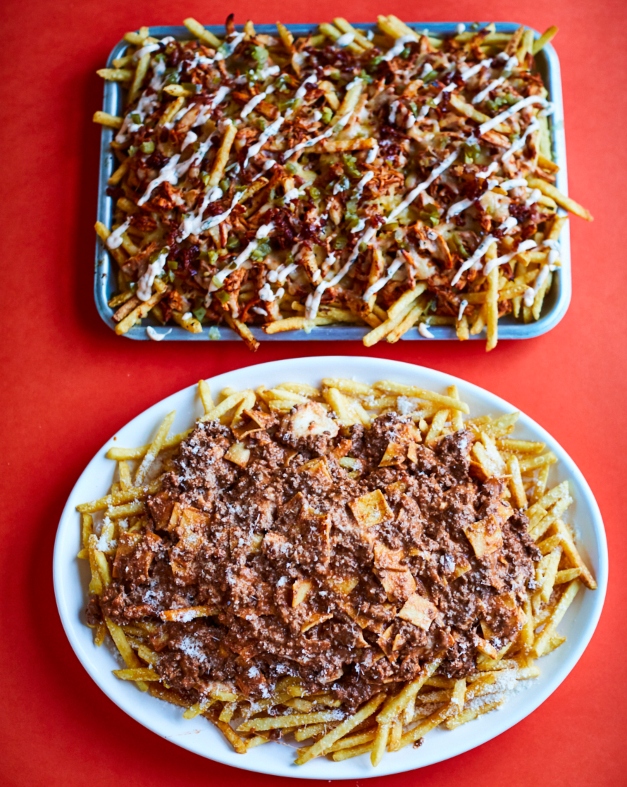 The next loaded fries recipe from Twisted is for lasagne-topped loaded fries. This recipe is slightly more complicated, but I assure you that it's worth it.

The first step involves heating a tablespoon of mild olive oil in a large pan before adding 200g of cubed pancetta and frying it until brown. You should then remove this into a bowl before adding 1kg of minced (ground) beef to the pan, breaking it up into two 500g batches. Once it's browned and cooked, put it to the side with the pancetta.

Now it's time to add 100ml of double cream, four lasagne sheets chopped into squares, 40g of Parmesan, and 2 x 125g of torn fresh mozzarella balls before cooking it all together.

Last, but most certainly not least, are the fries - the simplest part of the meal. Once they are cooked, add everything into a deep pan once again and generously spread your lasagne on top before sprinkling with grated parmesan.

We all know that lasagna and garlic bread are a perfect combination, which is why you have to seriously consider making Twisted's cheesy garlic baguettes with spicy honey for your Oktoberfest celebration as well.

The spicy honey is incredibly easy to make and involves mixing two sliced mild chilies and 250g of honey in a saucepan over low heat. Let it come together for an hour, mixing occasionally, before leaving it to cool.

The bread is best cooked over a BBQ, so preheat yours and prepare it for indirect grilling (aka put most of the hot coals to the one side) then combine 100g of grated parmesan, 125g of comté cheese, two tablespoons of finely chopped flat-leaf parsley, three tablespoons of finely chopped chives, 125g of unsalted butter, 50g of mayonnaise and four grated garlic gloves in a bowl. Season with salt and pepper. 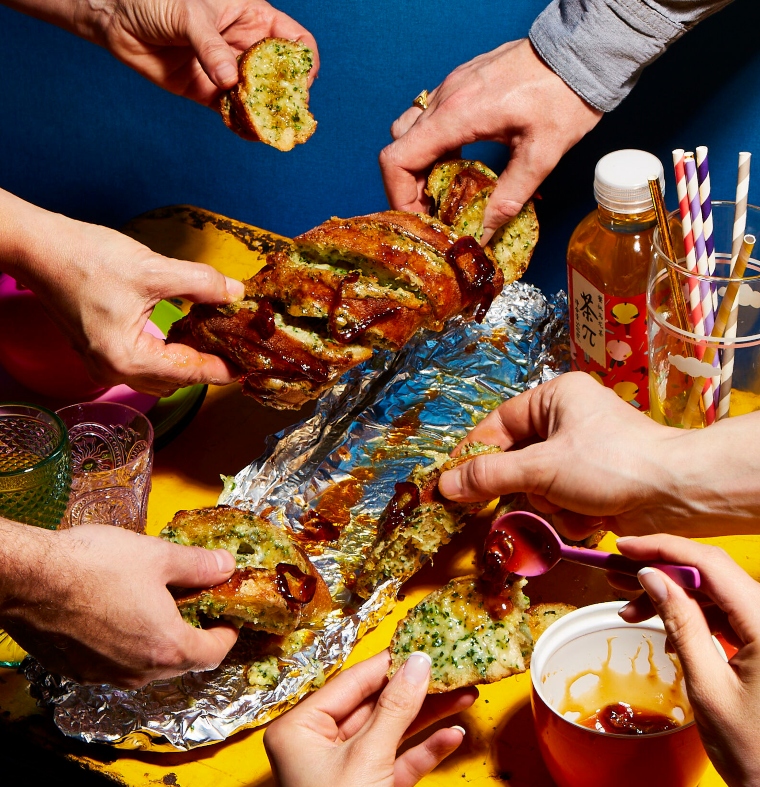 It's then time to move onto your baguettes, which you should slice along their length, almost to the base, but not all the way through and then divide the cheese mixture between them until they are nice and full.

Wrap your baguettes in foil, leaving the tops exposed, and put them on the cooler side of the BBQ and grill for 15 to 20 minutes - at which point, they should be crisp, melting, and smoky.

The final step involves drizzling your spicy honey on top, leaving you with a delicious creation.

A list of Oktoberfest foods would not be complete without at least one recipe involving sausage, but Twisted being Twisted, they're come up with a truly unique recipe that will go down a treat with any beer.

This is another meal that's best made on a BBQ and you should begin by preheating yours until the flames have subsided, leaving you with white coals.

Heat a tablespoon of oil in a medium ban over low-medium heat before frying a grated medium onion and a crushed garlic clove for around 10 minutes. Then add one large cooking apple that's cut into chunks for 10 minutes before adding 200ml of ruby port, 4 large rosemary sprigs (ensuring that you have one left over for brushing), and increase the heat until your mixture has been reduced by half.

Now, discard the rosemary and combine the mixture in a blender. 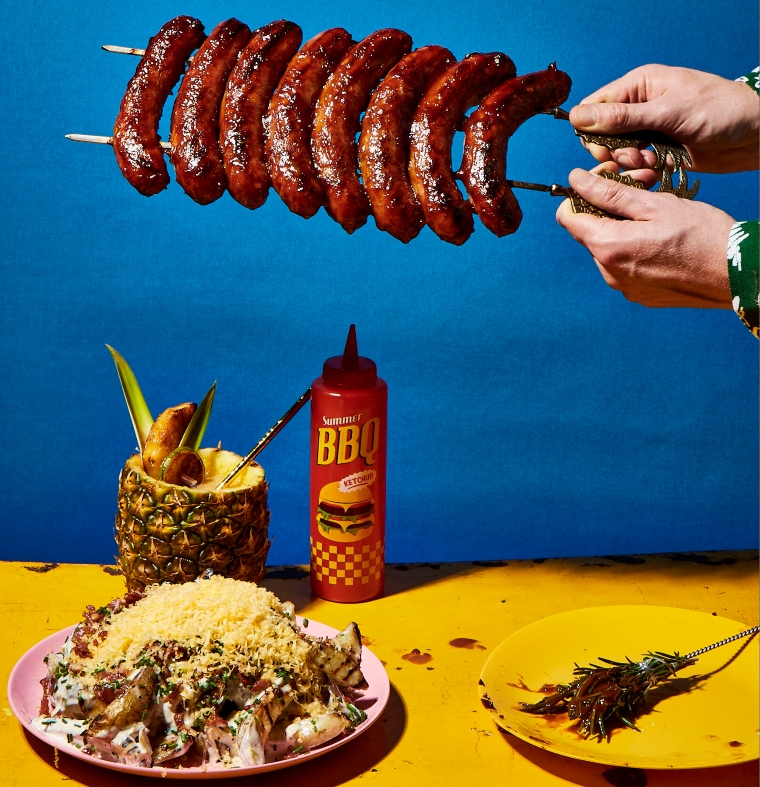 Add 200ml of cider vinegar, 250g of ketchup, a tablespoon of mustard, 150g of brown sugar, and half a teaspoon of cayenne pepper before seasoning with salt and pepper and cook for 10 minutes, leaving you with a thick mixture.

You're now finally ready to skewer your sausage and you and do u to six at a time in rows on two parallel kebab sticks. You will want to cook them through until they are crispy, which should take between five and 10 minutes.

Finally, you are ready to cover your sausages in the sauce using a rosemary sprig, and you should continue cooking them until they are sticky and look as delicious as the ones photographed above.

We've covered quite a few meats on this list of delicious Oktoberfest foods from Twisted, but sometimes, nothing quite hits the spot like steak, which is why we've included this recipe for mini steak wellingtons.

Heat two tablespoons of unsalted butter in a frying pan over medium heat and then add three finely diced shallots, 500g of mixed mushrooms, and cook. After this, add two tablespoons of thyme leaves, 100ml of white wine, and cook until you've got a dense paste that you can then season and cool.

Heat a tablespoon of vegetable oil in a large pan until it's very hot before seasoning four small fillet steaks (they should be around 4cm thick) and sear them on each side for 15-20 seconds before setting them aside. 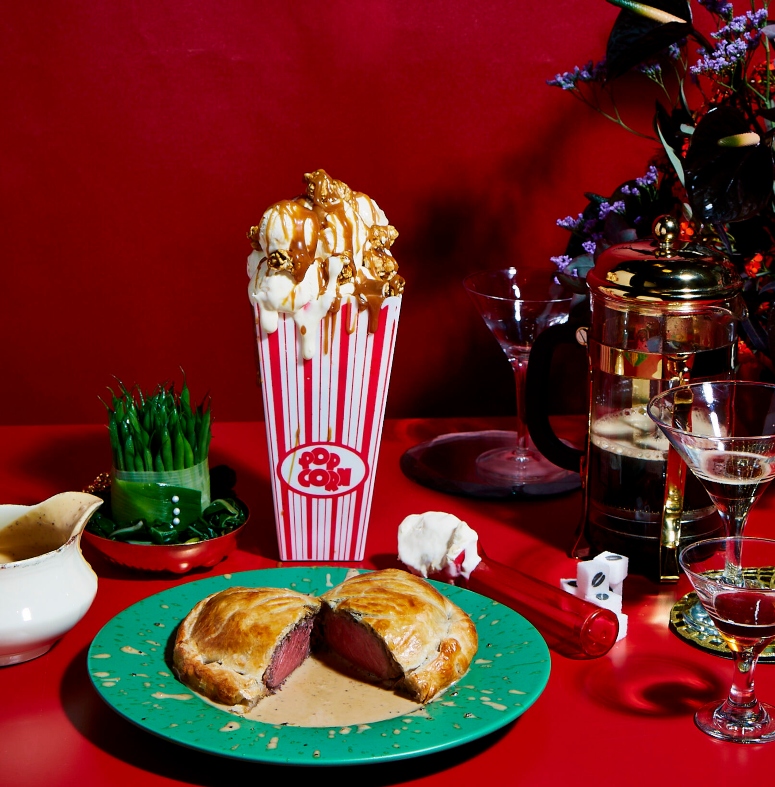 Now it's time to cut two sheets of ready-rolled all-butter puff pastry into two rectangles and spread the mushroom paste around it, leading 1cm around the edges that you should top with parma ham before enclosing the steaks and wrapping them in the ham (you will need eight slices for this).

Beat the two eggs in a small bowl with some water and a little salt and brush this over the edges of the pastry before sealing your wellingtons. You should then cut the pastry to create semicircles around the steak before crimping the edges and allowing them to cool in the fridge for around 20 minutes.

In the meantime, preheat your oven to 240℃ and ensure that there's a baking tray heating up inside. You should then brush the chilled wellingtons with the eggwash before popping them on the tray and making them for 12-15 minutes before taking them out and letting them rest for 10 minutes.

After this, make your peppercorn sauce or use a pre-bought one and serve!

I think by now we can all agree that Twisted has some truly mouthwatering recipes that are more than appropriate for Oktoberfest, but not all of them involve food.

Introducing the Beergroni! It's the perfect tipple if you're looking to spice up what you're drinking this Oktoberfest, but not stray too far from the roots of the celebration.

To make one of these delicious drinks, you'll begin by adding 25ml of gin, 25ml of sweet vermouth, 25ml of Campari, and 25ml of orange juice to a cocktail shaker alongside a scoop of ice cubes.

We're sure that you've been to enough bars to know what to do next, but after this, shake it hard for at least 10 seconds to mix - and remember, if you want more than one Beergroni, simply vary the number of ingredients used.

After this, with the help of a cocktail strainer (or sieve), double strain your drink into a short glass over some fresh ice cubes.

Lastly, but most certainly not least, you will top up your drink with around 100ml of American-style IPA beer (but let's face it, just about any beer will work here) to the rim and serve with an orange slice or two! 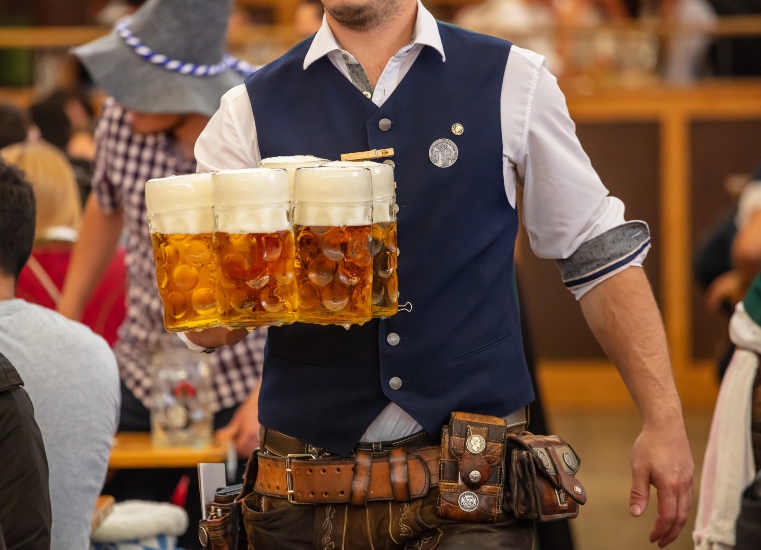 So there you have it, everything you need to make your Oktoberfest 2021 one to remember, regardless of whether you're celebrating at home with friends or enjoying all the fun of the fair in a traditional Bavarian beer tent!

Discover more of Twisted's incredible recipes for every occasion by purchasing Twisted: The Cookbook.