Twisted Guides: 7 famous restaurant recipes that you can now recreate at home

Battling the perfect storm of no staff, no customers and no prospect of business as usual for the foreseeable future, restaurants around the world are in dire straits. Staying relevant at a time when your tried and tested operating model suddenly becomes untenable is obviously a challenge. As a result, several businesses have decided to think outside the box and flip the whole restaurant-customer relationship on its head.

Alongside the switch from dine-in to delivery only, dozens of the most popular names in food have taken the drastic step of making their closely guarded recipes available to the public. While some have definitely been more candid than others, it’s clear that there’s never been a better time to try and replicate some fast-food classics in your own kitchen. Clear your schedule and get ready to cook - here are seven famous restaurant recipes that you can now recreate at home!

There’s no better way to get through a particularly challenging morning than with a mouthful of bun, meat and yolk. Fortunately, despite mass restaurant closures, the Golden Arches haven’t totally abandoned their clientele to miserable, sausage-less mornings.

In a handy infographic, the chain revealed the five ingredients you’ll need to assemble your own McMuffins at home, including instructions for cooking, seasoning, and a few interesting factoids about the dish. Simply assemble sausage meat, eggs, an English muffin, American cheese and a potato, and follow the guide. Sharing the recipe and visual instructions with multiple media outlets, McDonald’s may have provided the ultimate edible cure for lockdown blues. 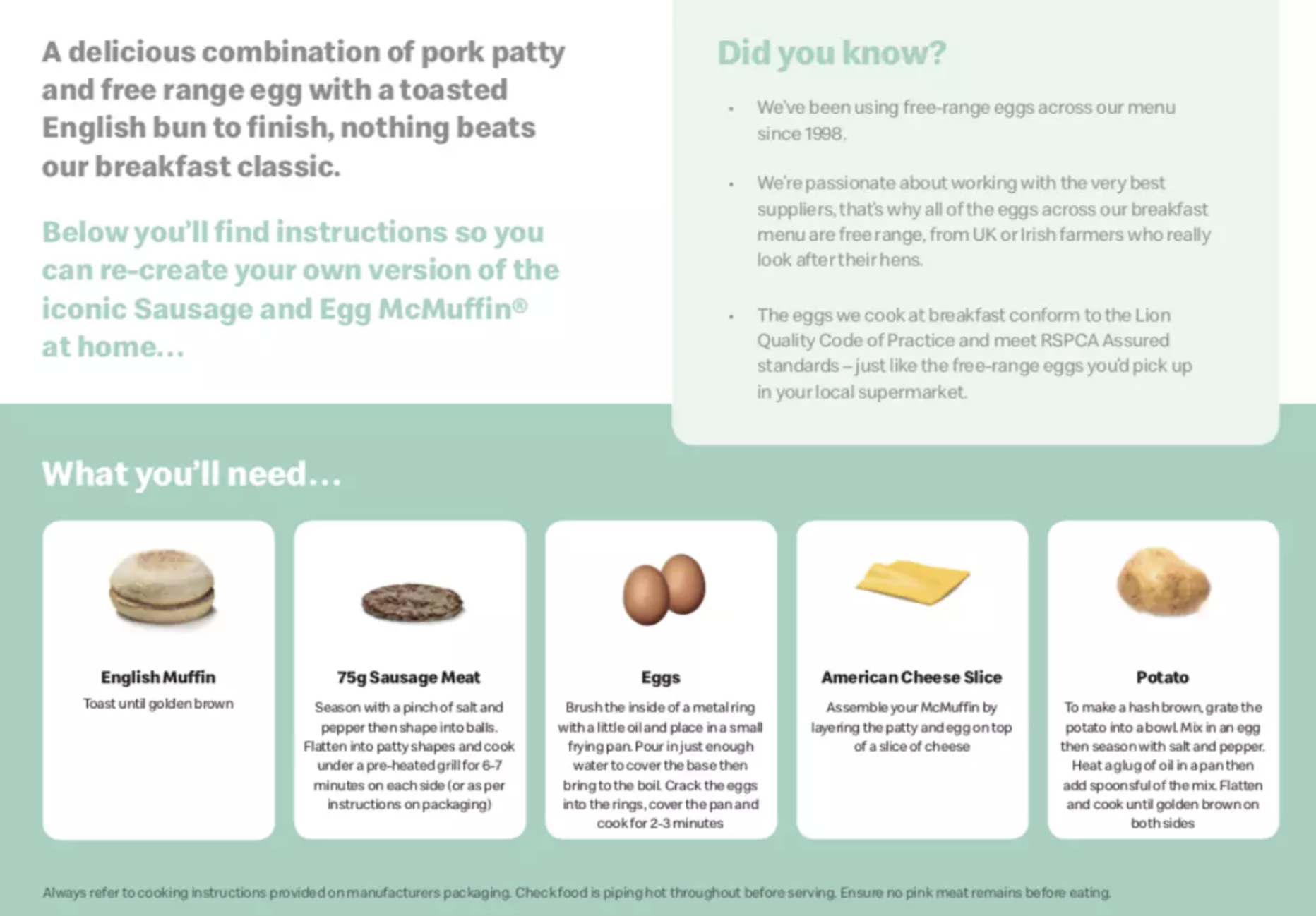 London’s artisanal baking scene has exploded in recent years, and London Bridged-based Bread Ahead are right at the forefront. From warm, crusty loaves to intricately crafted pastries, this bakery does the lot.

For anyone who lives too far afield to access the kitchen’s incredible range of sweet treats, Bread Ahead have made their legendary doughnut recipe available online - alongside a whole host of other popular dishes. Included as part of their Online Recipe E-Book, this recipe will blow shop-bought alternatives out of the water!

When you think of Papa John’s, pizza is obviously the first thing that springs to mind. However, just because the menu is dominated by giant doughy disks of cheesy goodness doesn’t mean that the rest of it hasn't got something to offer.

Following in the footsteps of some fast-food competitors, the Kentucky-based brand unveiled not one, but two twists on their beloved “scrolls” side dish, including variants for cinnamon and cheesy Marmite flavours. Shared with multiple media outlets, the recipe includes a guide for making the ultimate scroll dough, as well as the exact ingredients for the savoury and sweet fillings.

For the dough, you will need 25g of fresh baker’s yeast or a 7g packet of dried yeast; 200ml of lukewarm milk or almond milk; 380g of strong white bread flour; 50g caster sugar, plus an extra teaspoon; Large pinch of salt; 70g melted butter or margarine.

When you get past a certain age, Disney World stops being about the rides and parades and starts becoming all about the food.  Even though The Pirates Of the Caribbean may be temporarily out of action, there is still a way we can at least enjoy the edible side of what the park has to offer.

Published on the popular Disney Parks Blog, the brand’s Food and Beverage Communications Coordinator Alex Dunlap revealed the recipe for its perennially popular Churro Bites, providing the blueprint for fans around the world to get stuck in. To make things even more simple, the dish only requires water, butter, salt, cinnamon, flour, eggs, vegetable oil and sugar, meaning that there’s very little excuse not to give it a go yourself!

The go-to lunch option for literally millions of urbanites, the absence of Pret a Manger has been keenly felt by British commuters and office workers. While the brand’s signature sandwiches and soups may be out of reach, there is still a way for loyal customers to get their francophile fix.

Posted on the Pret UK website, the restaurant group’s recipe for Dark Chocolate Chunk Cookies will no doubt come as a major relief for anyone who’s getting increasingly frustrated with the lack of options in the biscuit jar.

Some restaurants have been fairly minimal when it comes to releasing recipe information. Others have been joyously carefree. The Cheesecake Factory definitely fall into the latter category, having provided tips for not one, but 19 of its recipes.

While there are plenty of tempting options to choose from, the most exciting for our money is definitely the formula for cinnamon roll pancakes. Short of the actual recipe for the brand’s eponymous cheesecake, these sweet spirally circles are the next best thing.

Once you’ve had your fill of fairly niche cookies and doughnuts, why not finish your homemade fast-food odyssey with one of the world’s most iconic sandwiches? Thankfully for the savoury-craving masses, Burger King has already obliged.

Posting on the brand’s French Twitter account, the restaurant chain revealed the formula for recreating its famous “Whopper” burger, including alternative ingredients that can be picked up from the supermarket.

According to the instructions, all you need to “have it your way” at home is an eight ingredient shopping list of buns, onion, pickles, ketchup, beef patty, mayonnaise, lettuce and tomato. The brand has even posted an accompanying video with more detailed directions for anyone who wants to get it absolutely right.

In a situation like this, food is about much more than filling you up. It’s about nourishing and sustaining whoever eats it mentally as well as physically. If recreating some of your favourite flavours can help give you a much-needed morale boost, we say get cooking.