As a product of the early ‘90s, I missed the worst of the fast-food wars. By the time I arrived, everyone was already “Lovin’ It” and all chicken was either “Finger-Lickin' Good” or worthless. I didn’t have to deal with the struggle for supremacy on the highstreet or watch as beloved brands were swallowed by greedy Golden Arches. The new world order was already well-established before I got here.

While the binary choice between a “McNugget Sharebox” and “Boneless Banquet” is broadly fine, fast food life was not always so straightforward. In the long long ago, colourfully cr*ppy eateries offered a smorgasbord of weird and suspicious fast-food. In most cases, this treasure trove of oddness has been relegated to history. But, if you look hard enough, there are still places where you can take a step back in time.

One of these tasty TARDISes is the magical and mysterious Wimpy. Once Britain’s best known fast-food franchise, the business has since been steamrollered by slicker, more sensible rivals. An empire of over 500 restaurants has now shrunk to just 67. With a name like “Wimpy”, it never really stood a chance against the bullies on the other side of the Atlantic.

Despite being booted out of Central London years ago, the restaurant still has a few outposts in the capital, clinging on like Mufasa on the edge of a greasy cliff. Since one of these bastions against the forces of Burger King is only a few hundred yards from Twisted HQ, I decided to pay homage to our fast food forebears and give it a try. It was just as confusing, infuriating and life-affirming as I’d hoped. I loved it. I’m never going back.

Unlike other purveyors of vaguely poisonous, dubiously speedy dishes, Wimpy still occupies a space in the nostalgic soul of Britain. It is characterfully terrible in the way that only British restaurants can be. Compared to the sterile, surgically-lit, screen-decked dining rooms of a modern McDonald’s, its analogue clocks, cartoonish menu and beige luminescence feel like a wormhole to the ’80s. If you crossed Little Chef with the frozen meat aisle of Iceland, you would get Wimpy.

Perhaps the most exciting thing about the Wimpy experience is the sausages. These aren’t sausages in the impotently circular McDonald’s sense. These are huge, swollen frankfurters, slashed and grilled into meaty, bursting balloon animals. Known as “Benders”, the Wimpy sausages are stuffed into burger buns and horseshoed like phallic Celtic torques. They are awesome, inimitable and wouldn’t make sense on any other fast-food menu. They don’t really make sense on the Wimpy menu. Frankly, who cares.

The madness doesn’t stop with the sausages. The chain’s signature half-pounder is an ode to the ritual of match-day burger van snacking, where raw onions and razor-thin patties combine to make a joyously rubbery, juicy mouthful. Buns are cheap, fluffy and hopelessly ill-equipped to cater for the vast piles of ingredients heaped inside them. Everything is served with mountains of chips. There are also sweet potato fries and something called a “Brown Derby”. It’s all gloriously weird. 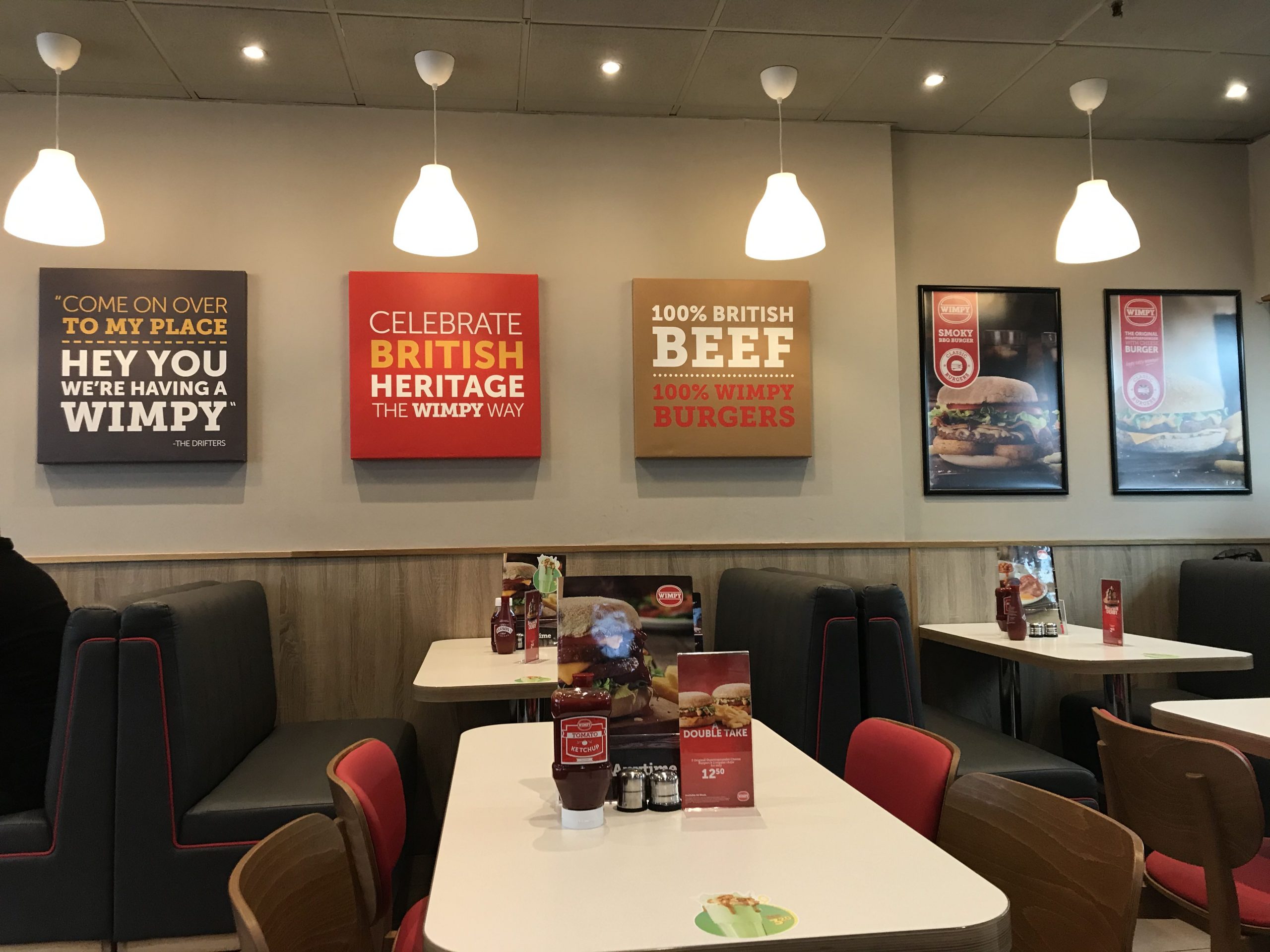 The more time you spend in Wimpy, the less the world makes sense. Everywhere you look, questions leap off the walls. Why is the kitchen open like a sort of anti-sushi counter? Why can I see into the fridge? Why is there table service, but only up until the point where you actually have to pay your bill? How many people have just enjoyed their Bender and done a runner? Is this why Wimpy couldn’t cut it against McDonald’s? Whose idea actually was it to call it a Bender?

Despite the bizarre menu and baffling ambience, it’s impossible to not feel slightly sad in a Wimpy. Not because the food is bad, but because this feels like one of the few places where common sense has never been a consideration. We’ve become so used to Big Macs and Bargain Buckets, that we’ve forgotten the creative potential of hot oil and a grill. Wimpy might not be as polished as its rivals, but the ability to eat a sausage and beef-loaded burger is an underappreciated privilege. As Joni Mitchell said, you don’t know what you’ve got ‘til it's gone.