When is Celebrity Bake Off on? All you need to know about the 2021 series

Celebrity Bake Off is always a highlight of the TV cooking calendar.

It's one thing watching talented amateurs stress over choux buns and sourdough starters. It's much more fun, however, to watch hapless famous people force-feed Paul Hollywood something inedible.

The fact that it's all in aid of a good cause is just an added bonus.

Ahead of the latest series of the celebrated spin-off, here's everything you need to know about Celebrity Bake Off.

When is Celebrity Bake Off on?

Celebrity Bake Off is scheduled to premiere on Tuesday, March 9 on Channel 4.

The show will then be broadcast at 8pm every Tuesday and will feature arguably the strongest line-up in the spin-off's history.

The series will consist of five episodes, each featuring four celebrity bakers. Following the format for the previous series', the celebs will attempt to tackle a signature, technical and showstopper challenge.

In the first episode, celebrities will be tasked with creating millionaire's shortbread, fruit tarts and a cake depicting their personal pet peeves.

If the trailer is anything to go by, there will be no shortage of dramas or disasters.

Check out the Celebrity Bake Off trailer here:

Who is on Celebrity Bake Off?

Although every Celebrity Bake Off line up seems promising on the surface, there's no doubt that 2021 is a bumper year.

Also included in the roster are stars such as David Baddiel, Jade Thirlwall, Katherine Ryan, Stacey Dooley and Nick Grimshaw.

With so many famous faces making their baking debut, this year's Celebrity Bake Off promises to be extra special.

James McAvoy will star on this year's show (Credit: Channel 4)

Unlike the original series, there is no overall winner of Celebrity Bake Off.

Instead, each of the five episodes has its own individual winner. This means that five separate celebrities take home a star baker prize at the end of every episode. 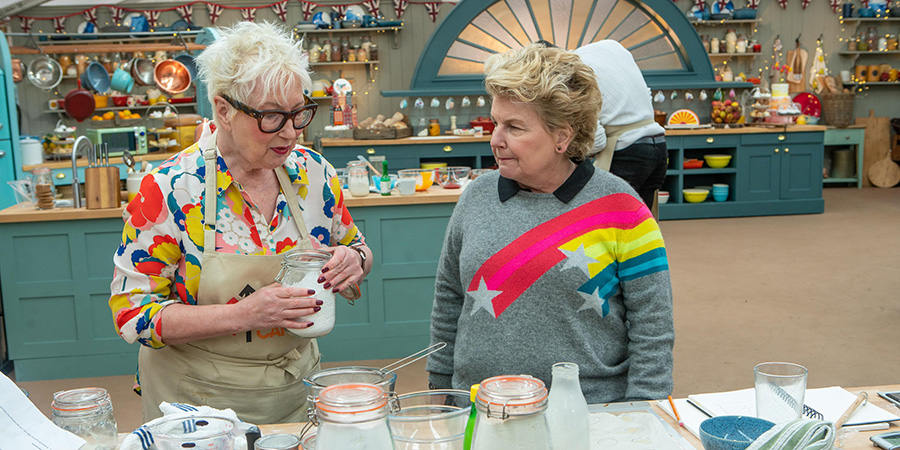 What charity does Celebrity Bake Off raise money for?

Celebrity Bake Off forms part of Channel 4's long-standing collaboration with the international Stand Up To Cancer Foundation.

The charitable programme operates in over 170 countries around the world, including the US. Every year, the initiative raises around $100 million for cancer research and treatment around the world.

The first UK event was actually held back in 2012, before Channel 4 had acquired the rights to Bake Off. The main telethon event has been held biannually ever since, although the 2020 event was unfortunately cancelled due to the pandemic.

At the time of writing, the effort has raised an impressive £40 million for cancer research in eight years.

Stand Up To Cancer is an international effort Credit: Channel 4)

Where can I watch Celebrity Bake Off?

Fans can watch the new series of Celebrity Bake Off on Channel 4.

The show will air weekly every Tuesday and will run for five weeks.

However, if any fans happen to miss the live broadcast, they will also be able to catch up via Channel 4's online service.

There really is no excuse not to revel in James McAvoy trying to avoid a soggy bottom.