Who makes the best pizza in New York? 16 NYC eateries you need to visit

Proclaiming who makes the best pizza in New York is like telling your friends which of them has the nicest children. While some answers are obviously more wrong than others, whatever you decide is going to upset somebody.

It’s almost worth acknowledging that everyone is lovely and leaving it there.

However, when you’re dealing with a city where dough, sauce and cheese are as existential as air and water, difficult decisions have to be made. No one wants their New York pizza cherry to be popped by anything other than a spectacular slice. 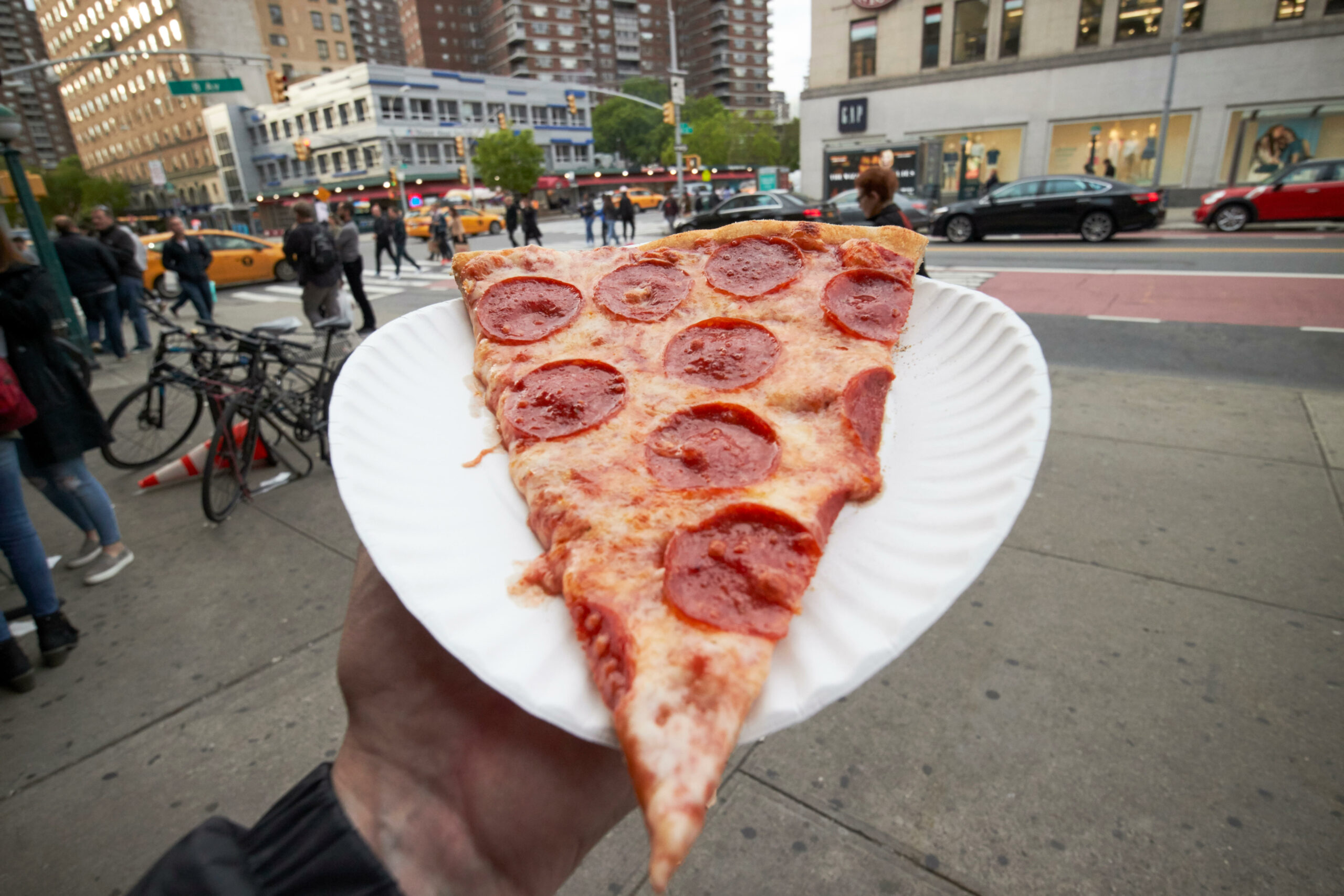 Who makes the best pizza in New York?

To help locals and visitors get it right, we've pooled together local knowledge and international expertise to create the ultimate slice guide.

Whether you're a cheese and tomato traditionalist, or prefer your pie to be a little more extreme, there's something for everyone. Here’s our list of who makes the best pizza in New York.

Please don’t be too cross. 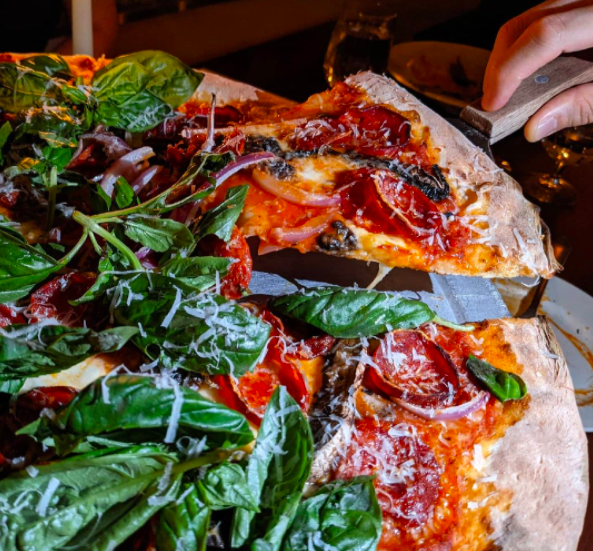 Lucali is one of the most famous pizzerias in the world (Credit: Instagram/cknchowmein)

Perhaps the most famous pizzeria on the planet, Mark Iacono’s legendary joint is an eat-here-before-you-die destination. BYOB and beloved by pop royalty including Beyoncé and Jay-Z, the restaurant is a temple to the traditions that make pizza so popular.

Pies are rolled out with empty wine bottles before being coated in tomato, mozzarella and basil. Added extras are available, but sometimes simplicity is all you need. 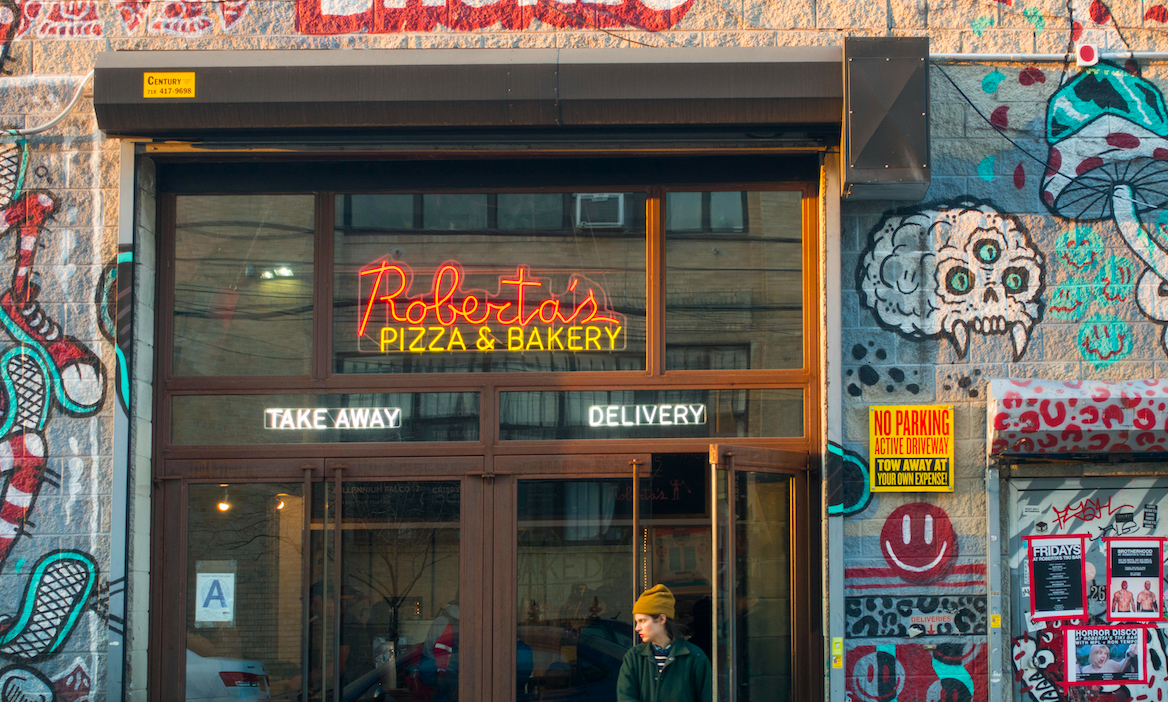 A restaurant doesn’t have to have been around since the last century to build a worthy reputation. Roberta’s has only been in business since 2008 but has already established itself as the must-visit pizza spot in Bushwick.

Specialising in seductively chewy, blistered Neapolitan-style crusts, the kitchen also boasts as many toppings as a well-stocked deli. 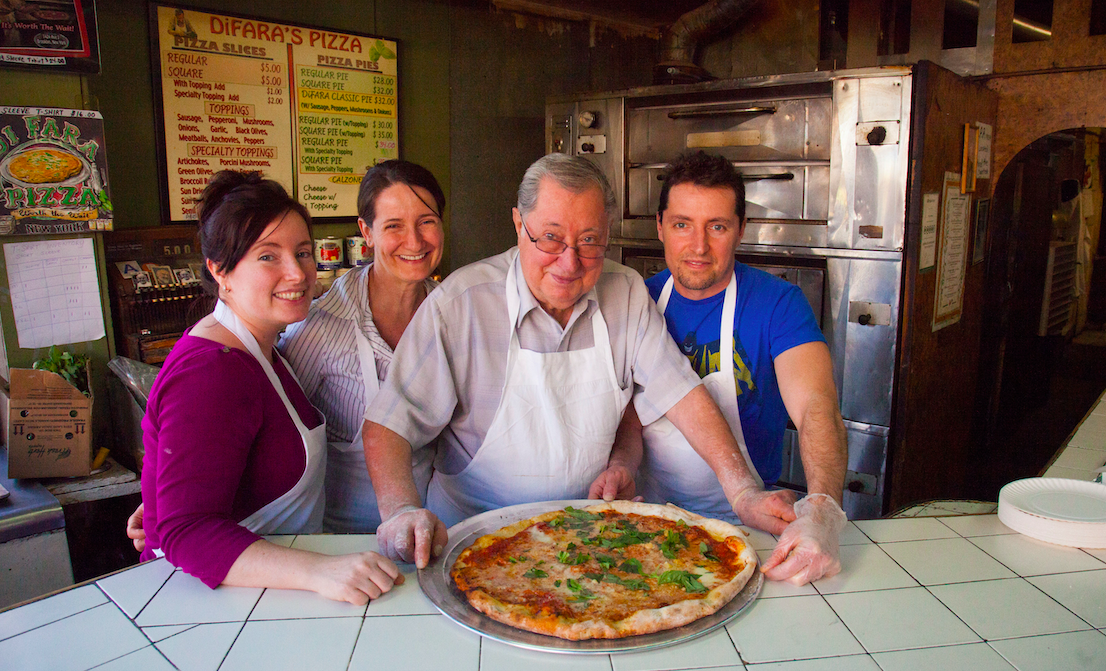 For all the flamboyance of the new kids on the pizza block, sometimes you can’t beat experience. Open since 1965, “Di Fara” is part of New York pizza folklore, and boasts the sort of pies that deserve their own hall of fame.

Sold in either regular or square slices, this pizza features imported Italian ingredients such as soppressata and prosciutto, all expertly prepared by 82-year-old maestro Dom DeMarco. 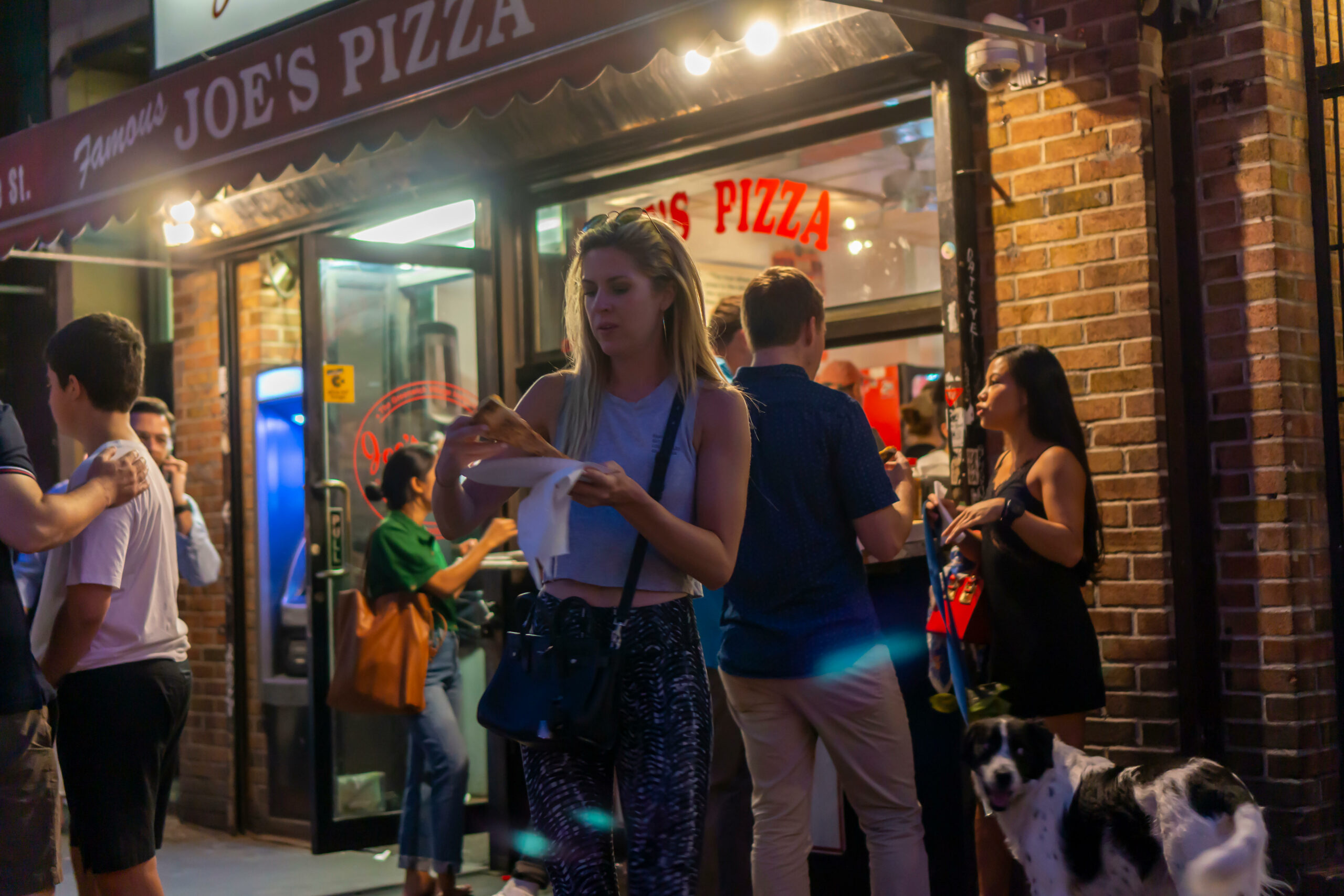 Joe's Pizza is one of the most popular joints in the entire city (Credit: Alamy/Richard Levine)

An oversized wad of tomato, cheese and crust, hurriedly eaten on a sidewalk might be the quintessential New York dining experience. If you too like to pretend you’ve been patrolling Greenwich Village since the days of Don Corleone, “Joe’s Pizza” is the place for you.

Offering what is possibly the best value mouthful in the entire city, Joe’s giant mozzarella-laden triangles are the epitome of what New York pizza should be. At $3 a slice, it would be rude to ignore. 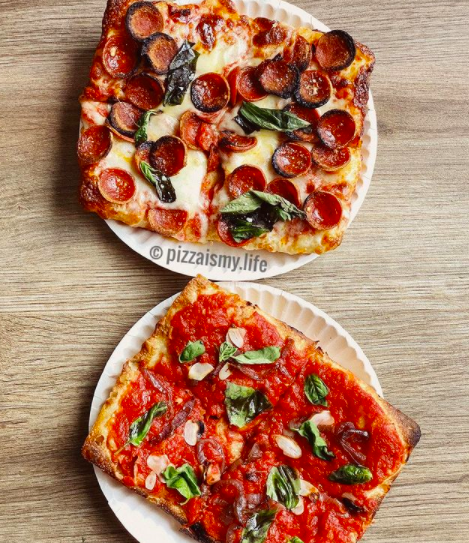 Paulie Gee’s inimitable and highly original restaurant and “Slice Shop” prove that unusual pairings can still deliver unbeatable flavour. One taste of their legendary “Mike’s Hot Honey”-topped Hell Boy, or beef-sprinkled “Hometown Brisket” pie is all the proof you need that weird toppings are awesome. 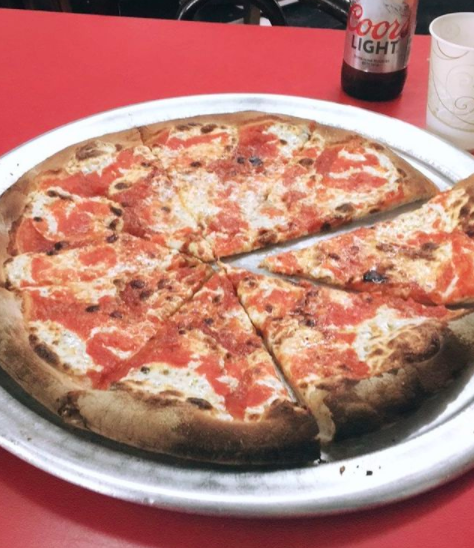 Coney Island may be best know for hot dogs and seagulls, but it turns out that the boardwalk also offers a pretty mean pizza. One of the oldest pizzerias in the entire city, Totonno’s has been spewing out scorching hot Neapolitan-style pies from a coal-fired furnace since 1924, and it shows no signs of slowing down.

Despite the wait in line, the smoky slices are definitely worth it. Just keep an eye on the gulls. 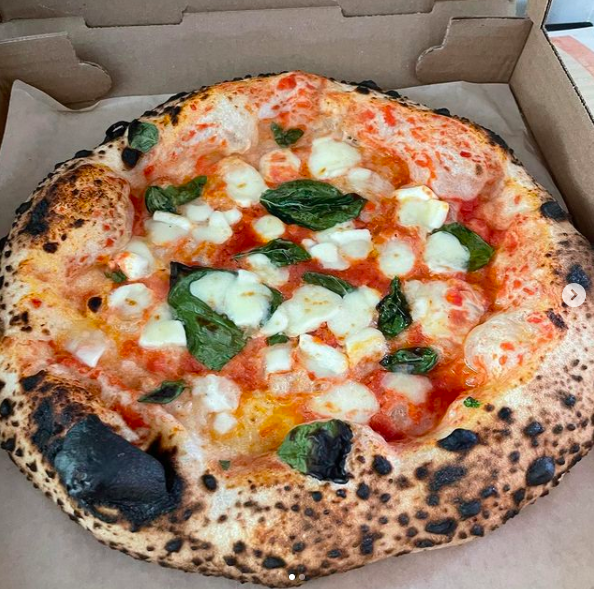 Despite the singular suggestion of its name, you’ll definitely want more than “una” of these incredible pizzas. Offering a dangerous combination of deceptive simplicity and serious deliciousness, these glorious Neapolitan disks are only ever topped with some combination of cheese, tomato and olive oil - with the exception of a single daily “Speciali”.

Take a bite and forget all about pepperoni. 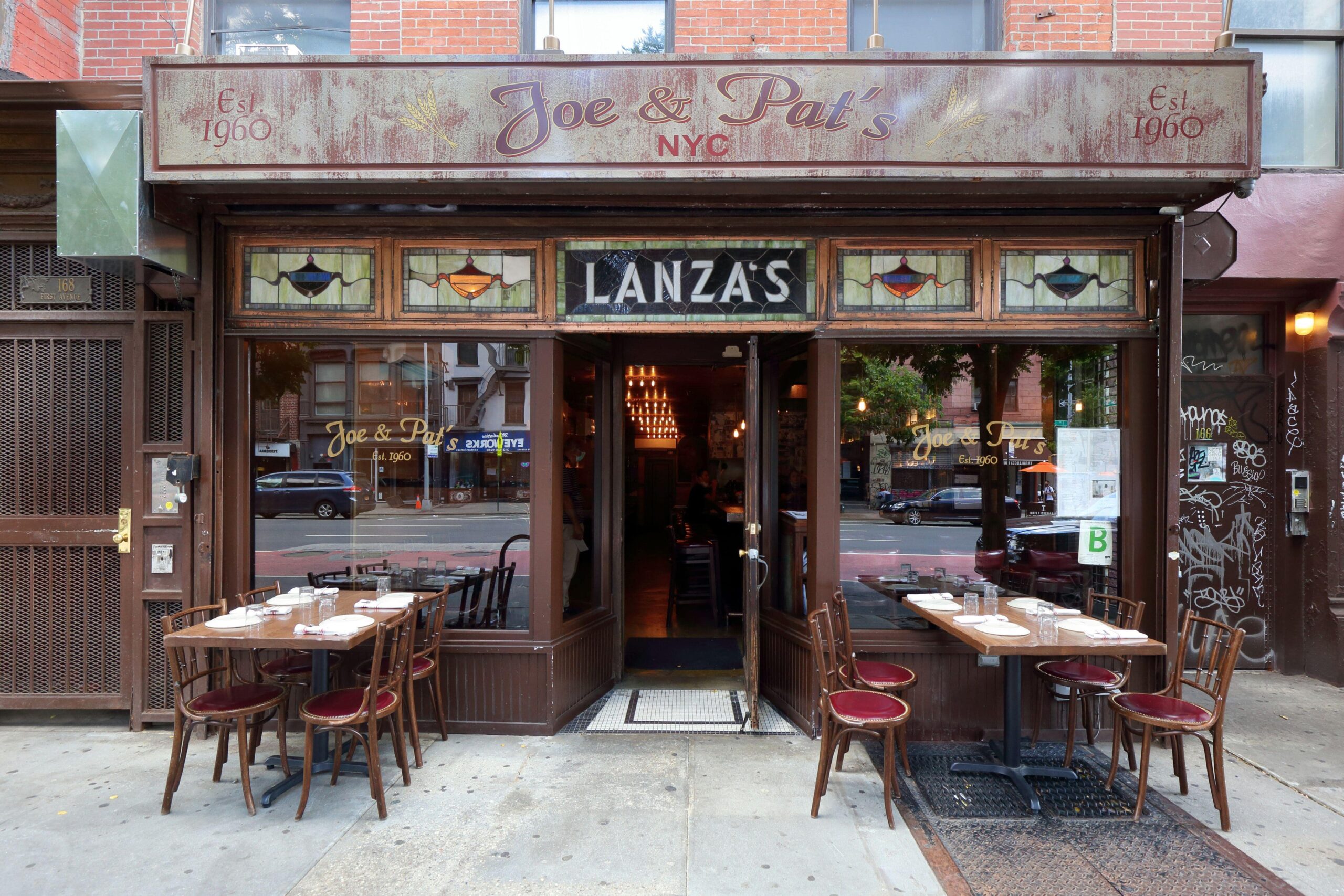 Unlike the baggier, more yielding Neapolitan approach, proper New York pizza can be almost alarmingly thin. When you eat at Joe & Pat’s, however, you need not worry.

Home of Staten Island’s best pie since 1960, the razor-thin base balances perfectly with tart tomato and gooey strands of cheese. It might look delicate, but there’s nothing insubstantial about the taste. 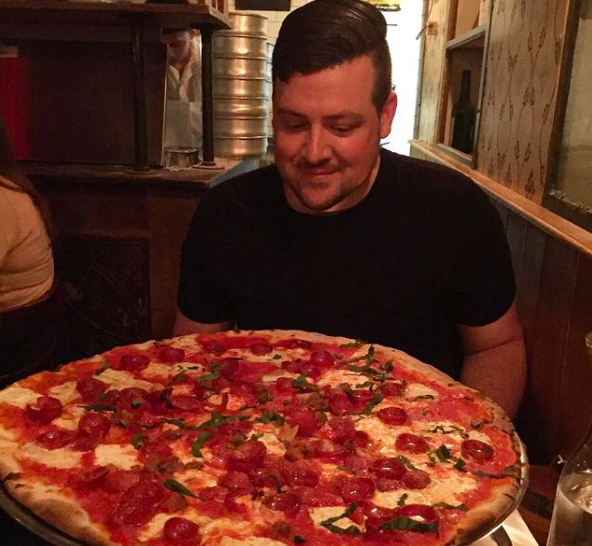 What’s better than a plain slice of pizza? A slice of pizza with added alcohol, obviously. The “Vodka” at Rubirosa is one of the most vaunted pizzas in the entire city and it’s easy to see why.

An indomitable Italian-American flavour combo coated on a Staten Island-style crust, this is the highlight of what is already a seriously impressive menu. The fact that there’s an equally awesome pasta section is the cherry on top of the pie. 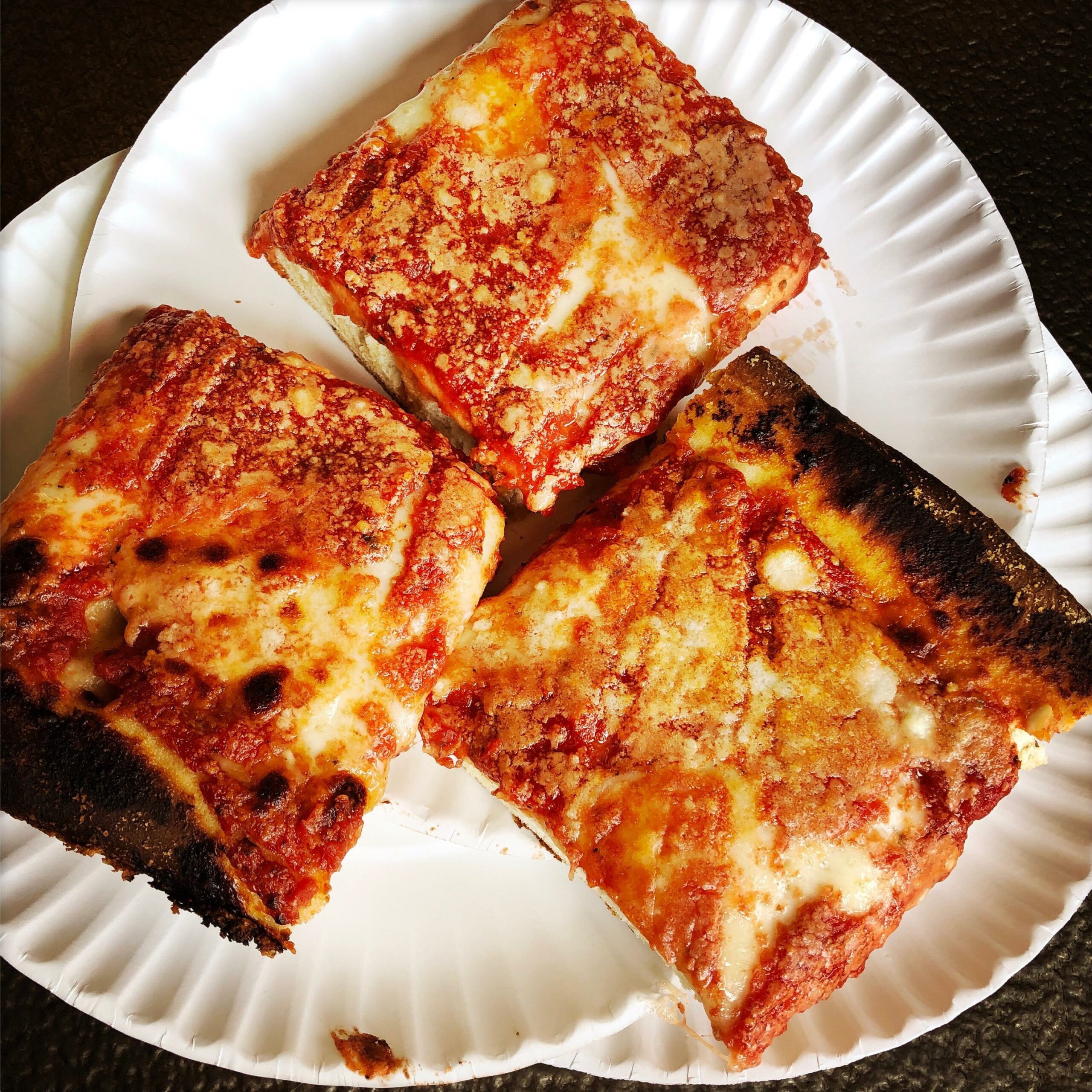 A traditional New York slice might have the same structural design as a sheet of A4, but that doesn't mean that the city doesn't do thick. A perfect example of this can be found at L&B Spumoni Gardens.

A specialist in hefty wedges of Sicilian style pizza, the L&B menu has caused its fair share of controversy among local pie conservatives. One taste of the restaurant's tomato-heavy squares, however, and it's obvious that there's more than one delicious way to reach pizza nirvana. 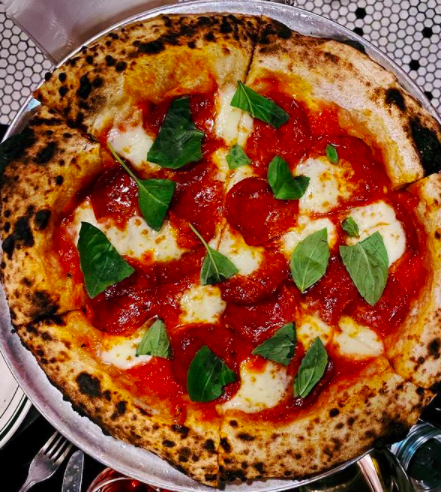 It might sound like a forgotten instalment in the Call of Duty franchise, but Ops is everything a modern pizzeria should be.

In addition to its mouthwatering pizza menu (house mozzarella, tomatoes, guanciale and pecorino, anyone?), the kitchen also boasts an enviable natural wine cellar. Perfect for when you want your slices half cut. 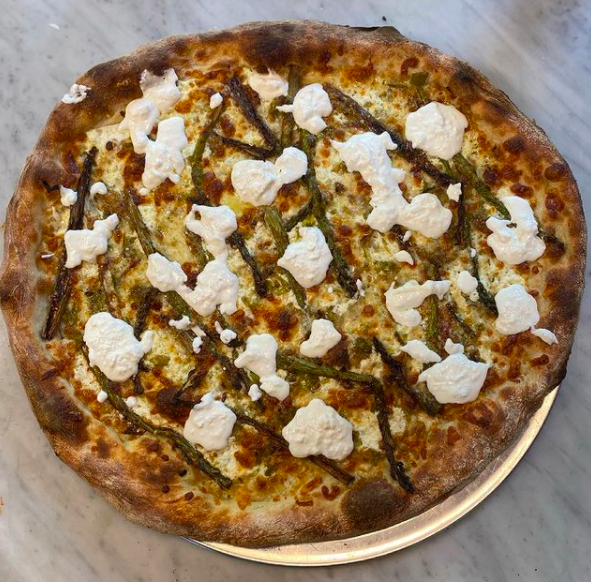 If you're looking for a restaurant that embraces New York's oldest slice traditions and isn't afraid to experiment, Mama's Too might be the joint you've been waiting for.

Boasting both razor-thin, chewy slices and richly laden squares, this Broadway-based favourite is living proof that you can have it both ways. Regulars, including the New York Times, swear by the pepperoni square, and it's easy to see why. 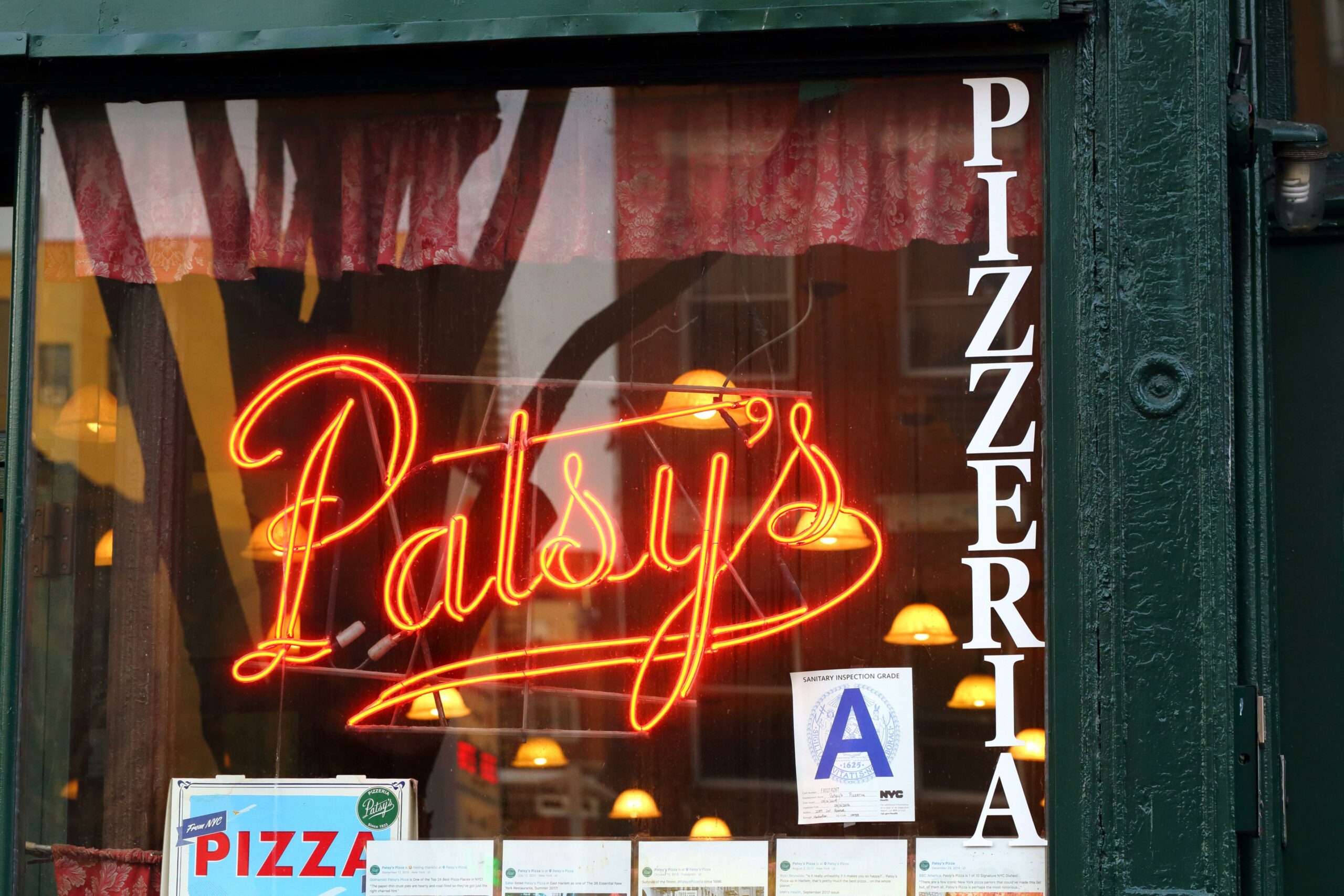 In the age of Instagram, looks can often be deceiving. In the case of Patsy's Pizzeria, however, the reverse is probably true.

These thin, glistening slices look like the picture-postcard version of a New York pie because that's exactly what they are. As simple as they are delicious, Patsy's pizzas might just be the best introduction to New York pizza anywhere in the city. The restaurant is a Harlem institution for a reason. 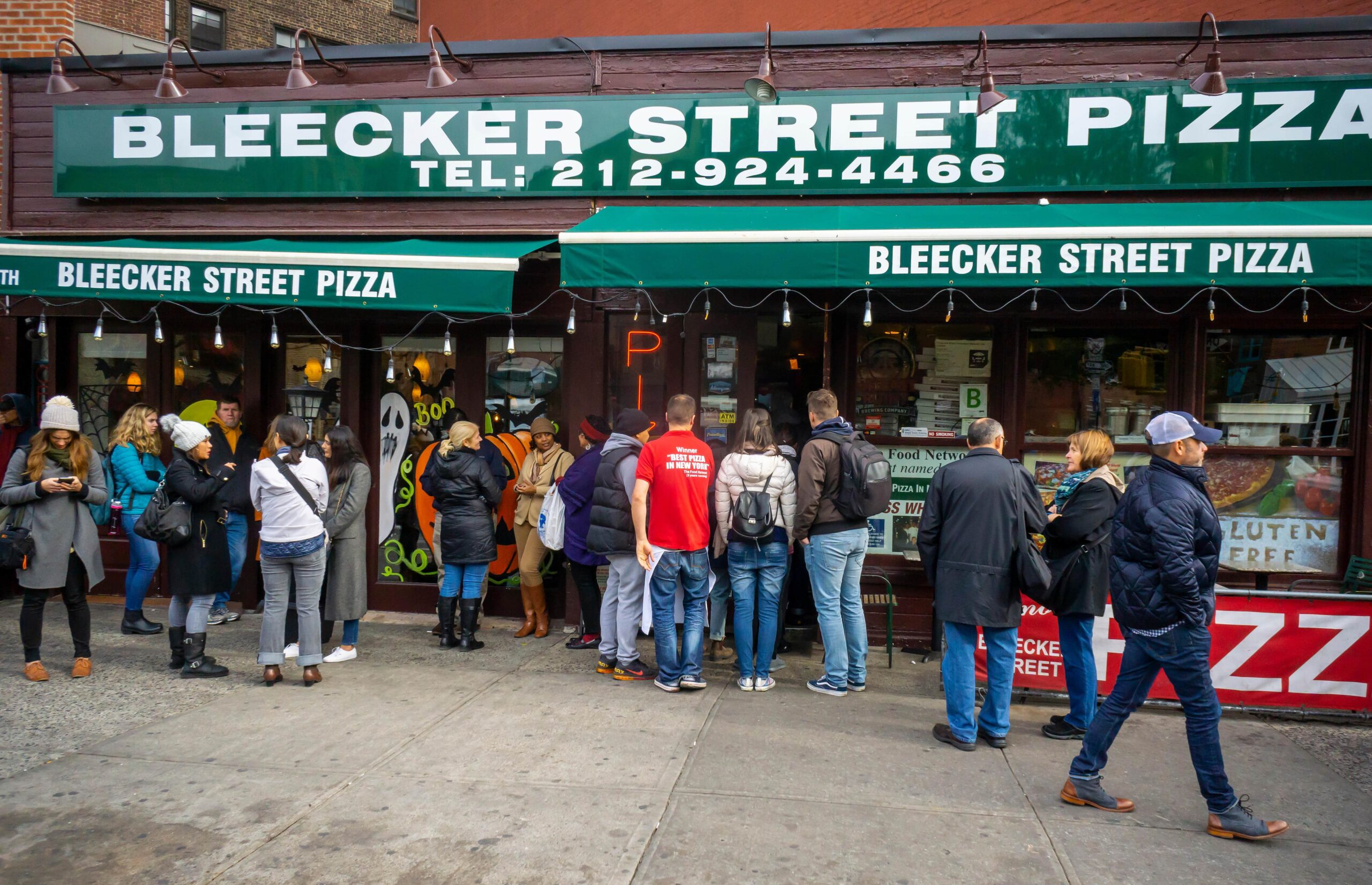 As indispensable a part of South New York's nightlife as alcohol itself, Bleecker Street Pizza has been serving award-winning slices late into the night for decades.

Regularly named as the city's best slice by a host of awarding bodies, Bleecker Street Pizza has earned its reputation as the go-to late-night slice shop in the West Village. If you're in need of a delicious central pick-me-up, this is the place. 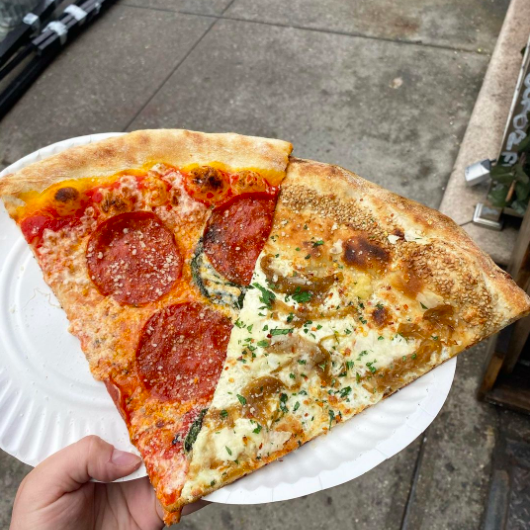 The aptly-named Best Pizza is extremely popular in the city (Credit: Instagram/zagrls)

It might sound more like a cynical attempt to out-fox Google than a worthy restaurant, but make no mistake - Best Pizza is the real deal.

Inspired by chef/owner Frank Pinello's Sicilian roots, the menu is a magical blend of Italian and American tradition. Giant 20-inch pies are plastered in a variety of delicious toppings, making the restaurant one of the best sharing spots in the entire city. 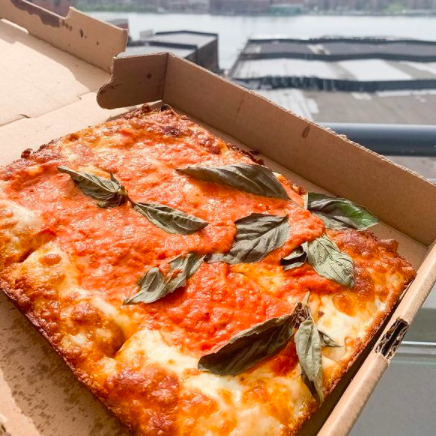 Emmy Squared is a relative newcomer on the scene (Credit: Instagram/thecooklyncouple)

Recommending Detroit-style pizza in New York might seem like blasphemy, but Emmy Squared really is that good.

Each chunky cube is slathered in a sauce so rich it makes Bill Gates look like a professional poet. Together with side orders of cheese-covered waffle fries, the Emmy Squared menu is a monument to what's possible with a deep fat fryer and a dream.

In a city that has dedicated so many resources into perfecting pizza, it’s hardly surprising that there are literally hundreds of delicious slices to try. But, if you haven’t got the time nor inclination to indulge in a month-long pizza quest, this collection is a handy short cut.