In the current climate, where we’re now all deliriously mumbling “happy birthday” in a handwashing haze, it’s easy to let your mind drift. The unbroken monotony of days trapped in a flat you can barely afford has interesting and unexpected mental side effects. Things that you’d ordinarily identify as slightly weird become much harder to spot.

Perhaps this explains why a Canadian woman was able to go several days frantically scrubbing herself with what she assumed was soap, only to discover that it was in fact cheese. Sharing the mistake on Reddit, the experience proves that even when you’re being exceptionally scrupulous, stupid things can still happen.

According to a post shared on the popular platform, Vancouver resident “Miley” made the mistake after accidentally leaving a piece of stale yellow cheese next to her sink after a night of merry making. As she explained in a hilarious caption accompanying a photo of the offending cheddar, “Just realized my soap wasn’t working because it’s literally a block of cheese.” 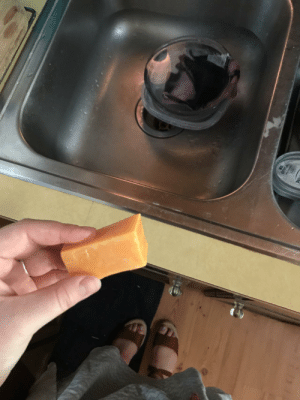 Miley went into further detail in an interview with CafeMom, in which she explained:

"It was a couple days of 'Why isn’t this foaming?!' I come to realize it was a dried-out square of Tillamook sharp cheddar cheese… I suspect i left it out when i was intoxicated and just forgot."

Watch as Gloria Gaynor Washes Her Hands To The Tune Of 'I Will Survive':

Predictably, the mishap received a short shrift from the online community, with hundreds of Redditors weighing in with their two cents. One person wondered, “But that must mean...... have we been eating Mac&Soap the entire week??” as another added, “Does that mean you put the soap in the fridge?”

However, not everyone was so quick to mock. As one sympathetic commenter pointed out, “To be fair to you it does look like a block of soap.” In times like these, clearly everyone needs to be extra careful. We should all keep an eye out for errant pieces of parmesan loitering near a sink.