The summer months are now well on their way: the nights are getting longer, the evenings are warmer and the days are sunnier.

Whether you enjoy a nice cold beer after a hard day's work, a glass of wine with dinner or a can of fizzy pop to help see you through baking hot afternoons, summer is a time during which we all need refreshing, and often.

That's why you might well be interested in these superb-looking Champagne Flute Ice Lolly Freezer Moulds, made by Sophistipops. 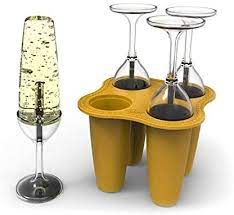 A product description for the Sophistipops reads;

"Fill the mould with your flavoured water of choice, then insert the stick that resembles a wine glass stem and place it in the fridge. After a couple of hours, remove the moulds and then gently pull on the stem to retrieve your Sophistipop ice lolly.

"Frozen apple and grape juices give the most authentic result, but the effect works just as well with any other flavour combination."

Instagram user Uncommensense shared a picture of the product, writing;

"So, my #sophistipops arrived today, which means even though the sun has currently disappeared, I can now make my blueberry & vanilla gin and tonic lollipops!!! Let's hope they work!"

These lolly moulds aren't the only product you'll want to be on the lookout for this summer, though. It was recently revealed that Pepsi would be bringing its pineapple flavor soda to the United States.

The eagle-eyed folk over at the popular snacking Instagram account Candy Hunting revealed the news and provided a picture of the box, as well as a write up of their own, stating;

"Here is the new Pepsi with a Splash of Pineapple Juice soda! According to the PepsiCo release schedule, this is a Walmart exclusive and is replacing the lime flavor. It tastes like Pepsi with added pineapple juice. Huge shock, I know."