For Chuku’s, London’s first-ever Nigerian tapas restaurant, Coronavirus has been just another obstacle.

The restaurant is a truly unique blend of traditions and techniques, serving traditional Nigerian ingredients and dishes in a format popularised in Spain.

With an ambitious mission to make its food "the heart of Nigerian social activity" and a menu to match, it's no wonder that Chuku's has quickly become one of the most talked-about restaurants in the capital.

Getting to this point has been a long journey. Before opening in March, the team battled everything from funding difficulties to flooded kitchens.

As co-founder Emeka Frederick explains to me over the phone, the lockdown was “just another thing” that has had to be overcome.

The sibling co-owners have learned the hard way that in the food industry, things rarely go to plan.

“People say, ‘fantastic review, you served Grace Dent’. But what people don’t realise is that the only reason I served Grace Dent that day was that we had two or three team members sick, so I had to step into the breach!”

This is just one of many experiences that have taught the Chuku's team that cooking food is all about rolling with the punches. Given current circumstances, this has clearly been a valuable lesson. 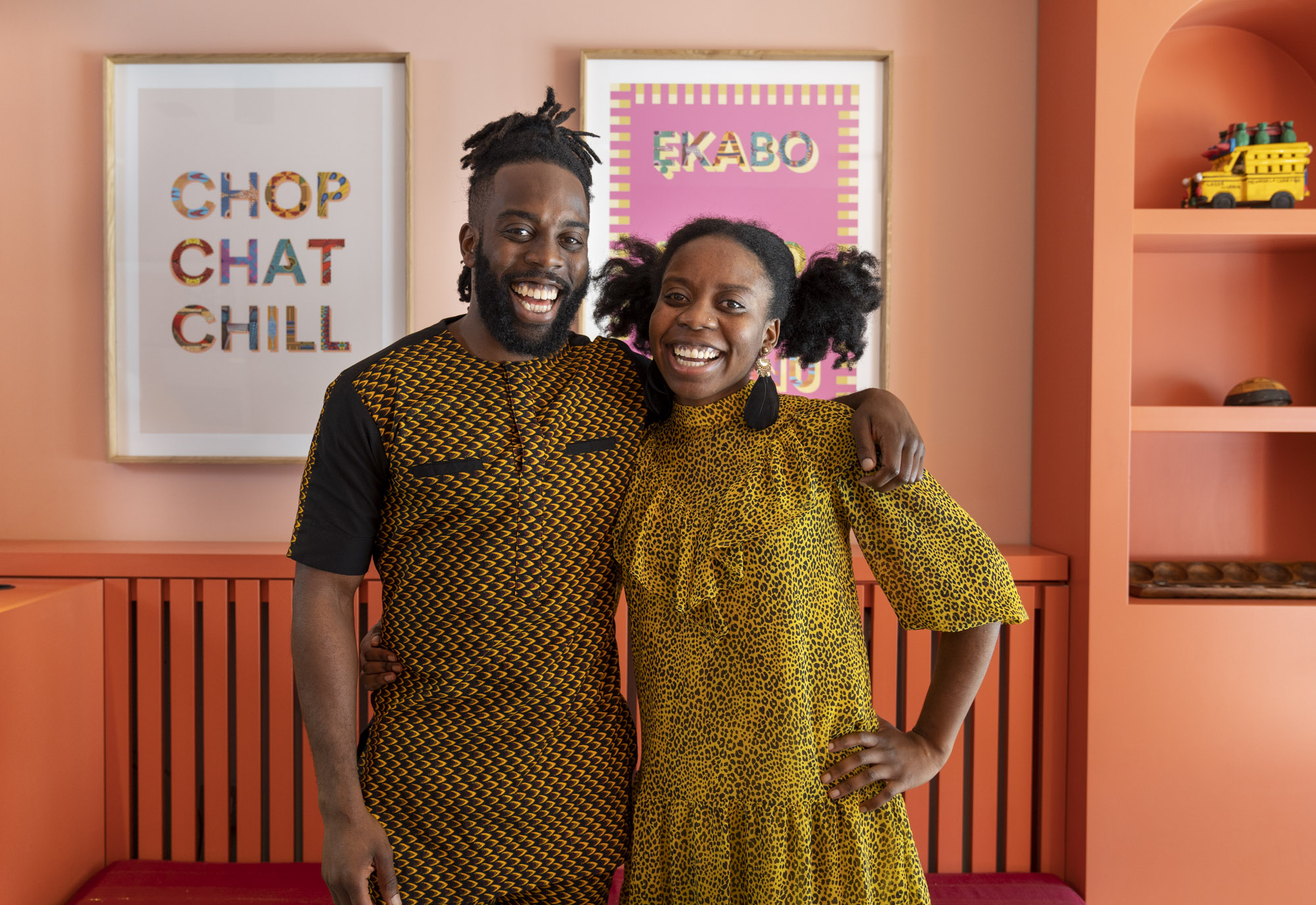 Chuku's co-owners Emeka and Ifeyinwa inside the restaurant (Credit: Chuku's)

"I think it's a great opportunity for us"

One of the things that makes Chuku's such a unique business is its emphasis on community.

The restaurant has been set up as a hub for discussing and sharing Nigerian culture. Its "Chop, Chat, Chill" mantra epitomises this outlook.

You might expect that our current crisis spells disaster for a restaurant that emphasises face to face contact and communication. In fact, as Emeka explains, the reverse may be true.

As he puts it:

"I think it's a great opportunity for us, to be honest.

"We always saw ourselves as something more than just a restaurant. So, if one of our guiding stars is around 'community', how then do you begin to think about 'community' beyond just the dining setting?

"For example, when we do a talk at a local school, we talk about our start-up journey and our business. That's a way that we're engaging with the community beyond the restaurant."

These "community-based experiences" remain a real priority as the restaurant begins to resume service. 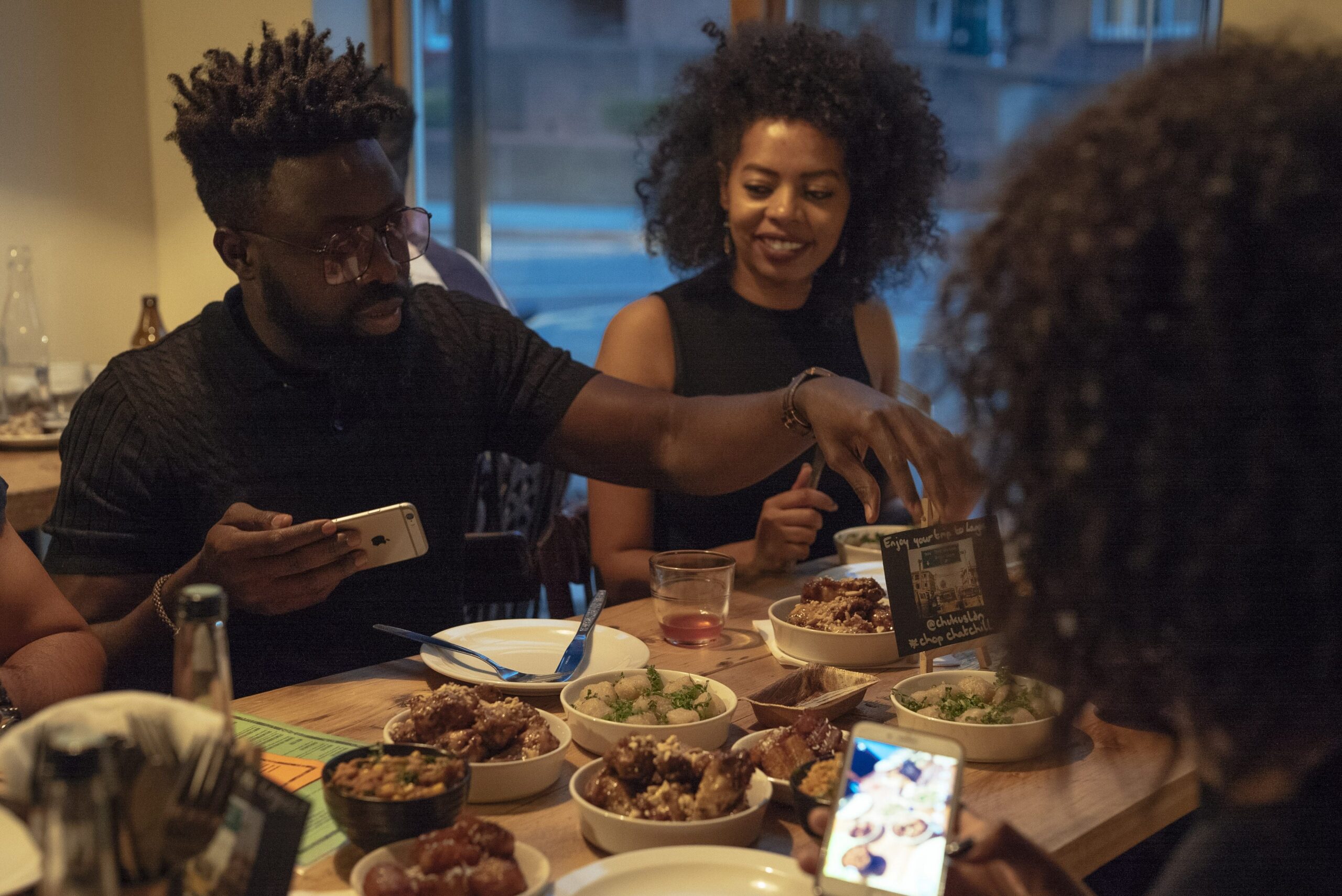 Community is a huge part of the Chuku's experience (Credit: Chuku's)

This mission is about much more than getting customers through Chuku's doors.

Throughout lockdown, both Emeka and his sister Ifeyinwa have engaged in everything from virtual supper clubs to videos, all with the intention of getting people together and "driving conversation".

A central pillar of this plan has been a new series of video interviews dubbed "Chuku's Chats".

Originally created as an ongoing blog on the Chuku's website, the format has now evolved to showcase fascinating, in-depth conversations with lesser-known voices in the Nigerian community.

This might sound like quite a responsibility for a restaurant still in its infancy. But, as Emeka explains, it was always part of the plan:

"(Making our voices heard on a wider platform) was always key for us. If you look back to the very first of our blogs, you can see that from very early on we were actually sometimes posting blogs more frequently than we were doing pop-ups.

"Not because we didn't want to do the restaurant," he adds, " but because it was a chance to continue educating, sharing, curating and creating content that is about celebrating Nigerian culture."

Although Chuku's Chats has been on temporary hiatus due to the pandemic, Emeka reveals that there are plans for the podcasts to be dropped fortnightly from mid-October until the end of the year.

The Chuku's team are under no illusions about how hard the next few months will be for the food industry. Emeka admits that in these uncertain times, it's difficult to know where you stand as a food business.

Asked about the prospects for the city's burgeoning food landscape, he honestly admits:

"Am I positive about the London food and restaurant scene? I'm not sure that I am, broadly."

However, what a restaurant like Chuku's shows is that helping the industry to thrive is about much more than just feeding people. Done right, a restaurant gives us all an opportunity to connect in ways that might not otherwise be possible.

If ever you needed proof that in this moment cherishing food is more important than ever, Chuku's is surely it.