Marcus Samuelsson is changing the way fried chicken is seen in Britain. Although the dish’s origins owe as much to medieval Scotland as they do to the American south, it’s never carried the same significance in the UK.

Not that we don’t love battering and deep frying things. It’s just that our oily foods have tended to be less about community and culture. Instead, it's more about trying to stave off an impending hangover at half-three in the morning.

However, despite our history of dodgy chippies, there are signs that the British restaurant scene is taking fried birds a little more seriously.

The UK now plays host to Europe’s largest wing festival, a celebration of gloriously messy finger food in Stratford’s Olympic Park. Everywhere you look in London, posh poultry pioneers like Chick ‘n’ Sours are doing things with a deep fryer that would have been unconscionable until a few years ago. All this makes Britain fertile ground for a chef like Marcus Samuelsson. 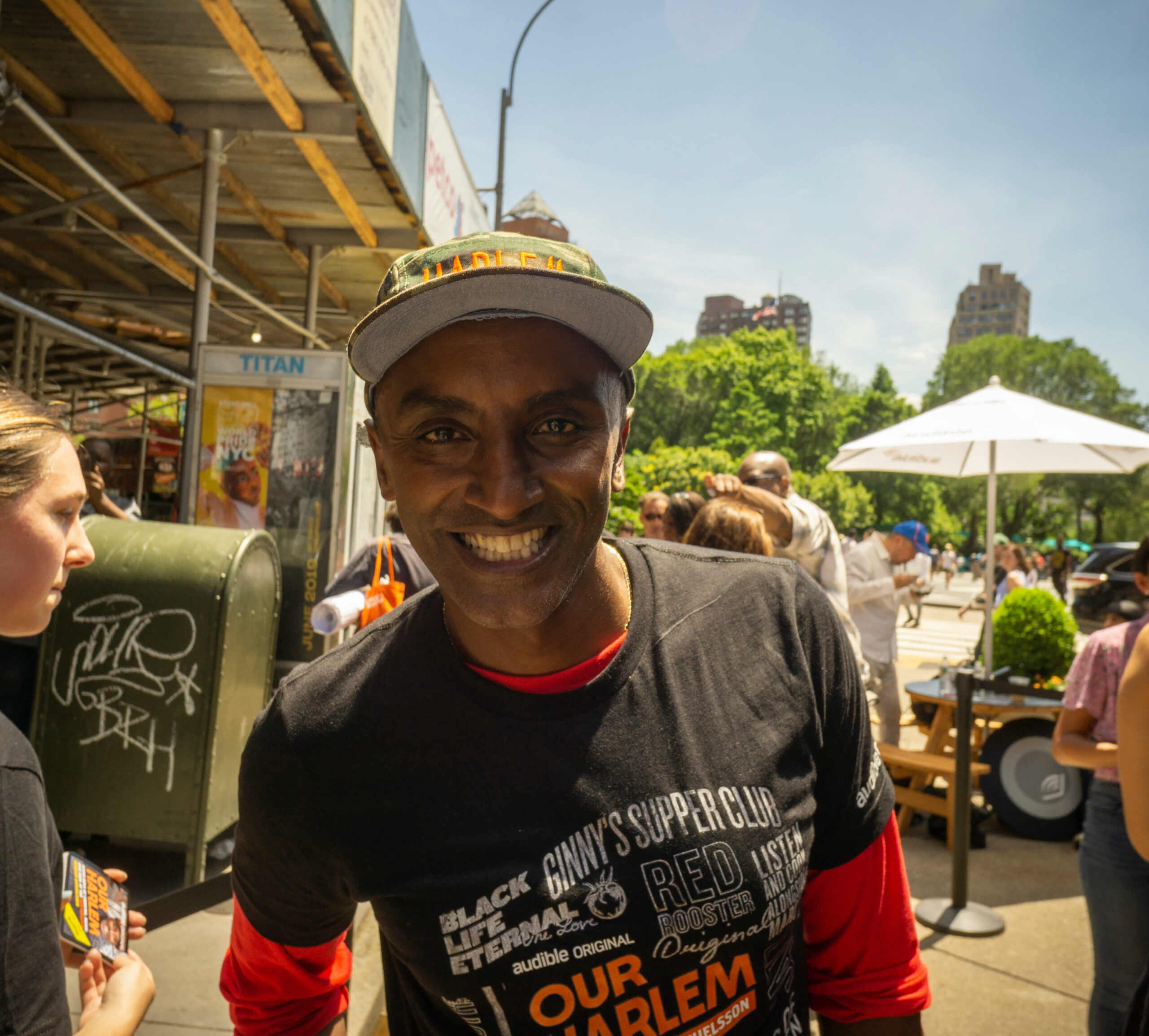 Marcus Samuelsson is one of the most celebrated restaurateurs in the world (Credit: Alamy/Richard Levine)

MaOf all the cooks currently working in East London, Samuelsson arguably possesses the most impressive, and eclectic, CV. He is the youngest chef to ever win a three-star review from the infamously scurrilous New York Times for his restaurant Aquavit. Samuelsson cut his teeth in a string of Michelin starred kitchens around the world.

From there, he has established himself as a leading authority on world cuisine, publishing books that tackle everything from Scandinavian, to Japanese, to African food - drawing on his dual Ethiopian and Swedish heritage in the process. 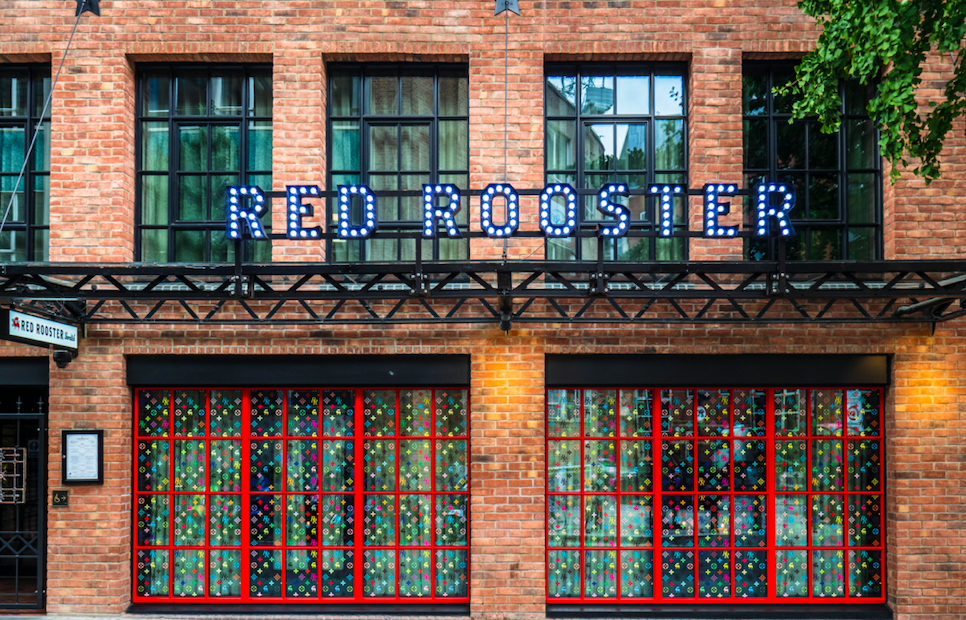 Samuelsson was also responsible for preparing and cooking the first state dinner of the Obama presidency. Samuelsson, clearly, has his fingers in many pies.

However, for all the accolades and acclaim brought by fancy food, it’s in fried chicken that Samuelsson has found his calling. His Red Rooster restaurant in Harlem, New York has become the stuff of legend. So much so that Obama decided to team up with Samuelsson for a second time to throw a fundraiser at the venue in 2011.

It is with Red Rooster that Samuelsson has been able to conquer the East End. In 2017, he opened a Shoreditch location in the bowels of the Curtain Hotel. Quenelles and forceps have been swapped for epic riffs on chicken and waffles, and with great effect. 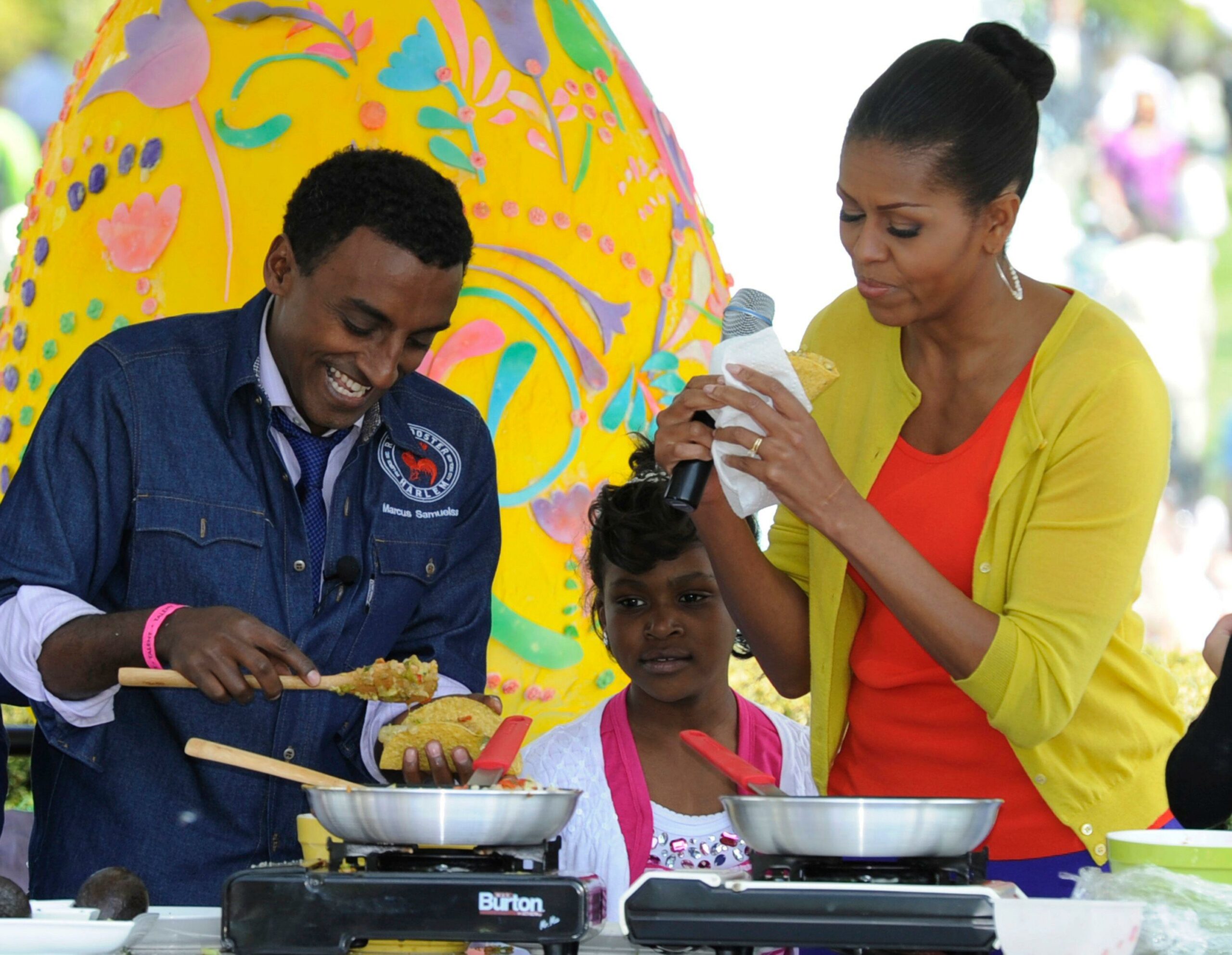 The future of Red Rooster

I had the opportunity to speak with Samuelsson in his own back yard. It is apparent just how much he is still relishing the move away from the rigidity traditionally demanded by fine dining.

Discussing his vision for Red Rooster, he incredulously describes his dismay at previous businesses turning away customers. If you turned up "15 minutes late for a reservation" or had the gall to “wear trainers to the dining room", you'd risk being denied entry. This restaurant is the antithesis of that approach.

Everything about Red Rooster Shoreditch is designed to foster intimacy. Tables are close together. The restaurant occupies what could be a cavernous basement, yet never feels anything other than cosy. As he himself puts it, “it’s about being social, not just about food,” and about creating a “sticky space” where guests really want to be. 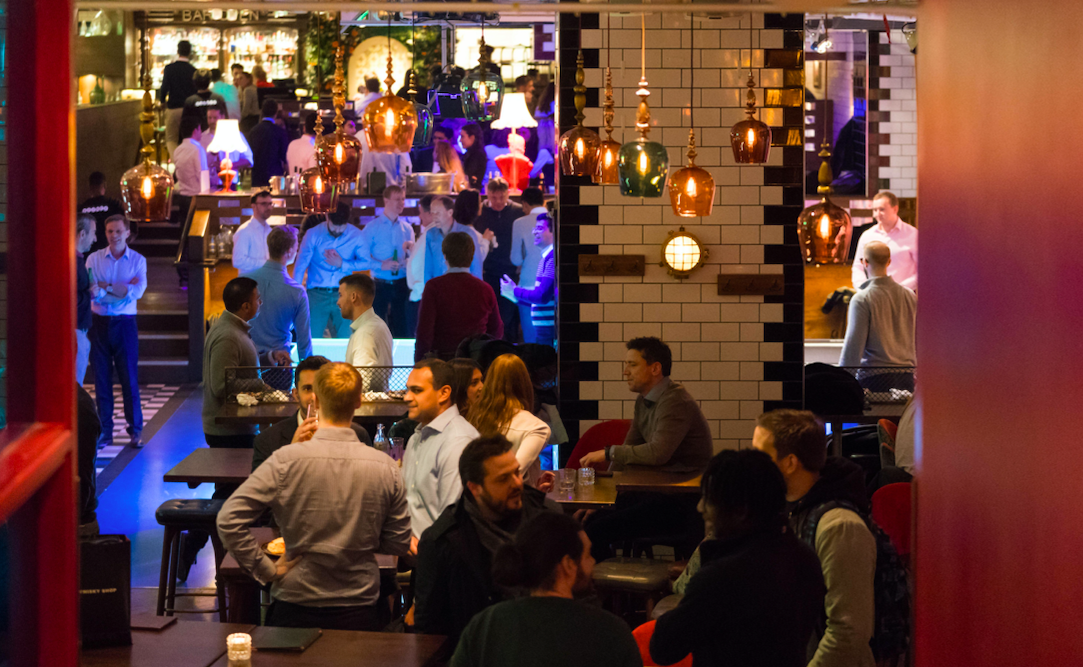 A look inside the Shoreditch branch of Red Rooster (Credit: Alamy/Mickey Lee)

When pressed, Samuelsson divulges his hopes for Red Rooster. He wanted to have “a different conversation with the public” to what had been possible in a business like Aquavit.

The result is a welcoming, inviting atmosphere. It's typified by events like the weekly gospel brunch, where diners are serenaded by members of a local choir while they eat. It’s a feature lifted straight from the Harlem original, and it works perfectly in its new home.

It becomes clear that Samuelsson is just as interested in music as he is eating. He describes his crew in the kitchen as “a band”.

When asked whether he seeks inspiration from other chefs, he immediately replies, “I write my own songs”. As the topic turns to the restaurant’s new Spring menu, which we are ostensibly here to discuss, he immediately name-checks Prince’s “Sometimes It Snows In April”. He highlights how the song underlines the season’s unpredictability and has influenced everything that he wants to serve.

As he talks, a large drum kit sits on the restaurant's main stage. Here, every night local bands and DJs entertain table loads of fried chicken fans. Music is everywhere you look. 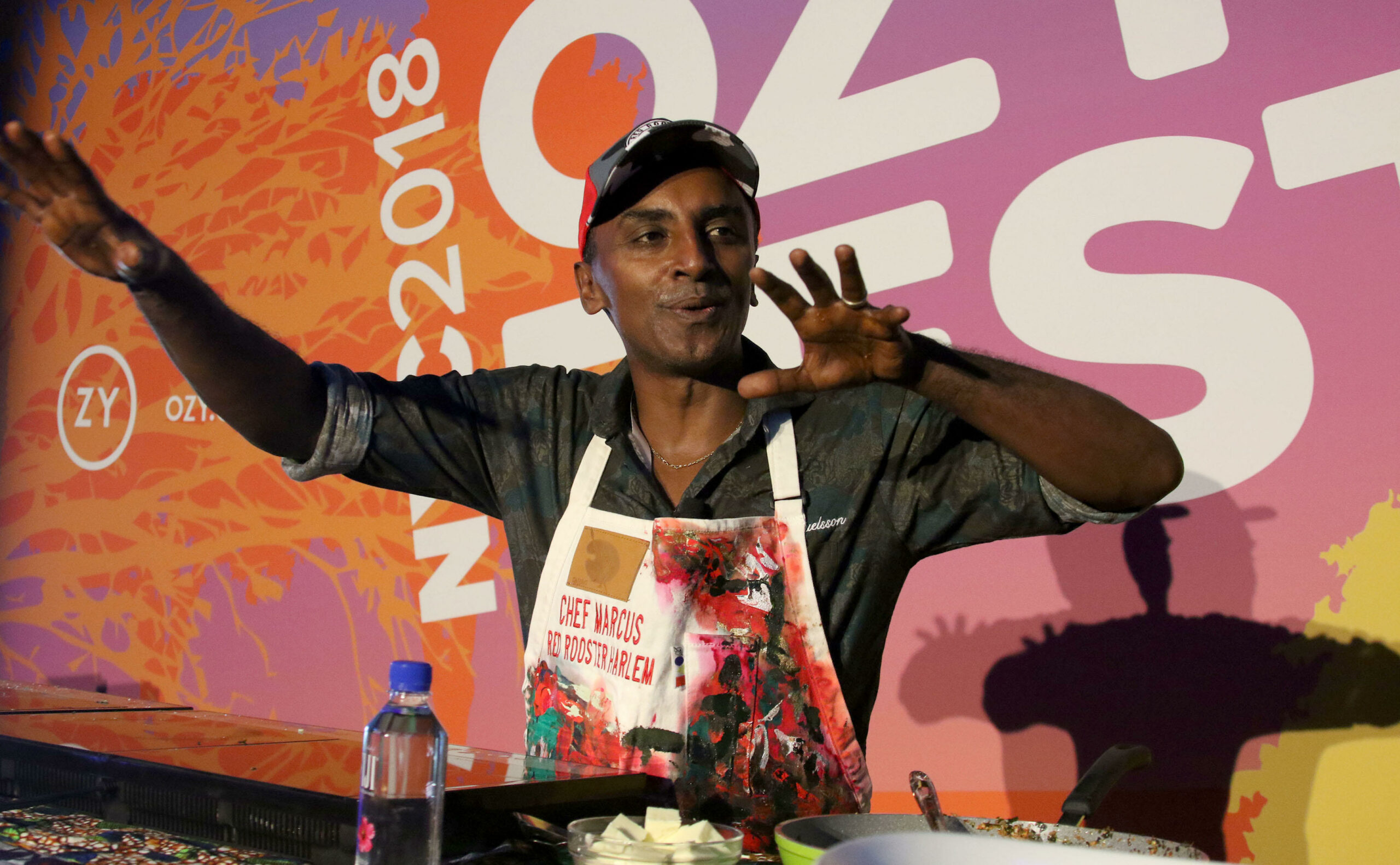 As unusual and exciting as Red Rooster’s atmosphere is, it would be a mistake to assume you’re only turning up for the vibe. He might be playing with different instruments, but Samuelsson is still a chef who has run a Michelin starred operation – and the food lives up to the billing.

We’re treated to an exciting insight into the direction of the new menu, with Samuelsson presiding over the pass as the kitchen showcases some of their new material. Meticulously plated seared squid ceviche with couscous salad; sashimi served with shiso and aioli; and beef fillet with baked spiced cassava chips are equal parts fresh, spiky and surprising.

This is exactly what Samuelsson says Spring should be all about. As we eat, he excitedly describes the different notes each dish should be hitting. Music, again, is centre stage.

He explains that, as with every other fried chicken item on the menu, the bird is brined, buttermilked, steeped in coconut water and twice-fried for a juicy, crispy finish. It’s a technique that has taken years to perfect. 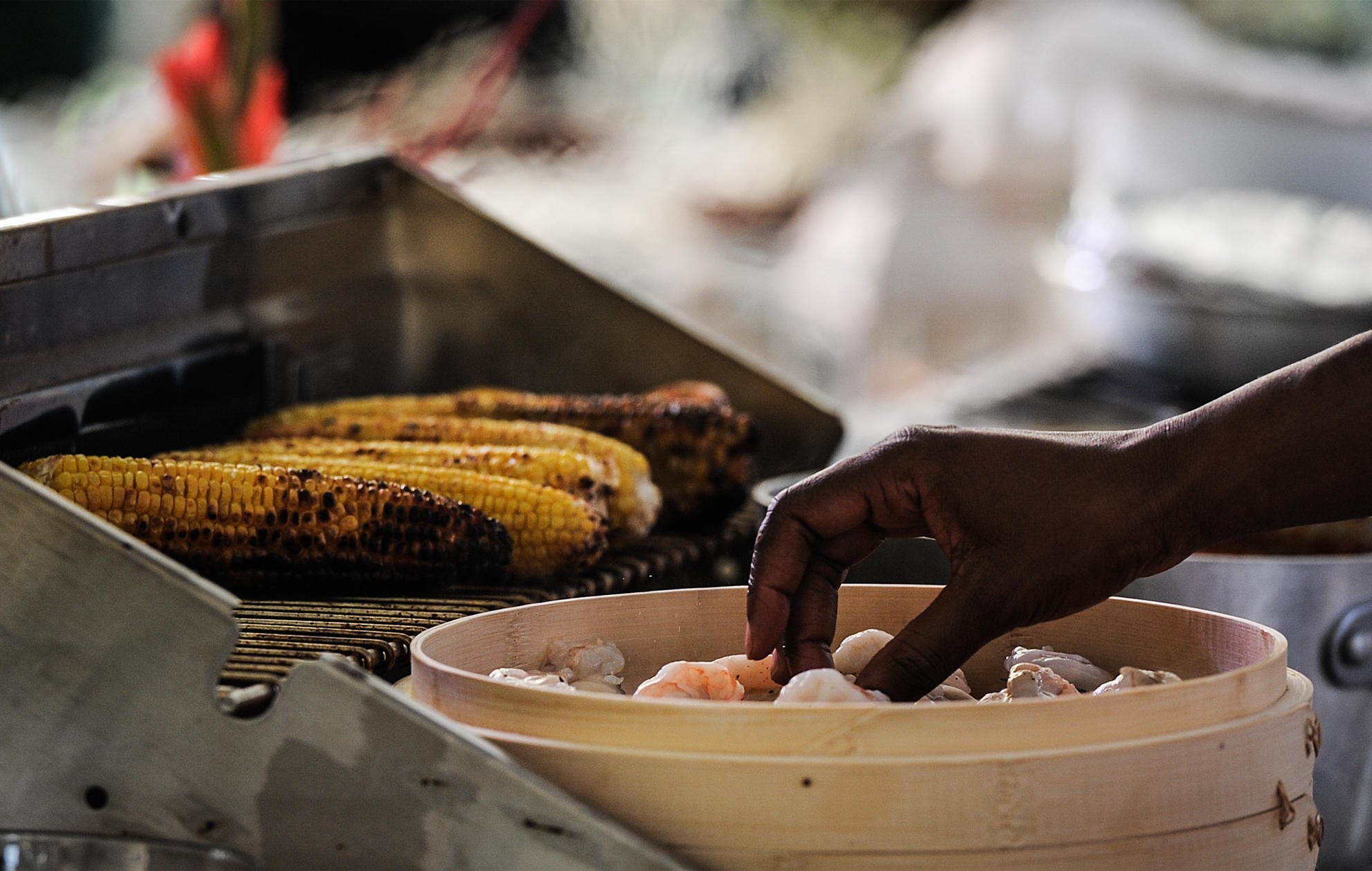 Samuelsson mischievously suggests that the key to making great fried chicken is not about thinking about what the dish should be. Instead, it's about what it shouldn’t.

For instance, he says that he knows fried chicken “should not be dry”. Nor should it be boring and monotonous. Samuelsson’s version is therefore as much about balancing and building textures and providing a “mixture of salt and sweet” as it is about cooking something that looks the part. The end result is as impressive to eat as it is to admire.

Of course, as a world-renowned chef, Samuelsson’s cooking tips are always worth paying attention to. However, after an hour in his company, it’s obvious that making amazing fried chicken is about much more than the ingredients in the kitchen.

One of the first things he revealed was his views on the difference between “eating” and “dining”. For Samuelsson, “eating is something you do at home. Dining is what you do when you’re out.” It’s an altogether different experience.

For him, Red Rooster’s fried chicken is about much more than just food. It’s about the whole package of socialising, sharing and enjoying the environment as a group. It’s finding the right balance between all these factors that, ultimately, can make fried chicken perfect.