For a long time, finding a vegan restaurant that wasn't health-centric, saintly and slightly irritating was a challenge.

Irrespective of the kind of food vegan diners actually enjoy eating, much of the scene was depressingly limited in its scope. Now, however, things have changed, thanks largely to a fast food revolution.

Over the last few years, a glut of exciting vegan junk food joints have sprung up all over the country, offering everything from burgers to pulled pork and fried chicken. Spearheading the trend is our growing appetite for meaty plant-based options.

To understand why meat substitutes have such a devoted following, we sat down with Temple of Seitan co-owner Patrick O'Shea. As pioneers in the vegan fast food space, serving some of the best animal-free fried chicken around, no one understands the industry better.

As it turns out, it's much more complicated than just missing the taste of KFC. 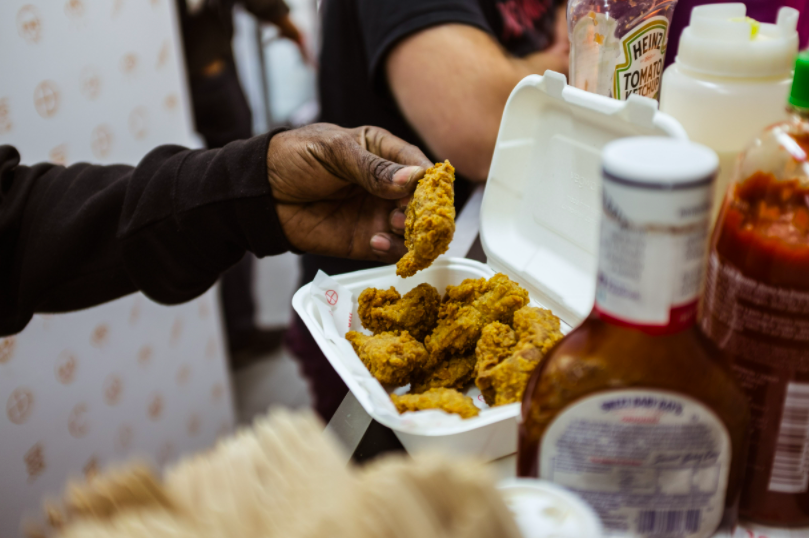 Since launching in 2017, Temple of Seitan has established itself as one of the leading lights in vegan fast food. The restaurant now has a devoted cult following and sites all across London

In fact, the business is so successful that, post-lockdown, two more restaurants are coming to the Temple roster, in Colindale and Brixton.

However, as O'Shea reveals to me over the telephone, the UK hasn't always been open to meaty vegan cooking. As he explains: "(My wife and I) moved over from Australia in 2014, and coming to London we were quite surprised by the number of vegan options you could get in supermarkets.

"But the restaurant scene was not what we were used to. We found that the options were quite limited to healthy organic, raw-type choices. That's not really what we were interested in!"

O'Shea continues: "There was this stereotype of a vegan as some sort of hippy-ish, very in touch with their own health and well-being etc. That's a segment of the vegan population. But people are vegan for a whole bunch of different reasons.

"When you look at it on the whole, vegans are normal people – they just choose not to eat animal products. It doesn't mean that we don't have the same cravings as everybody else!"

The desire for something a little different and a little decadent ultimately led the duo to the vegan fried chicken concept. Four years later, it's clear they weren't the only ones wanting something more indulgent. 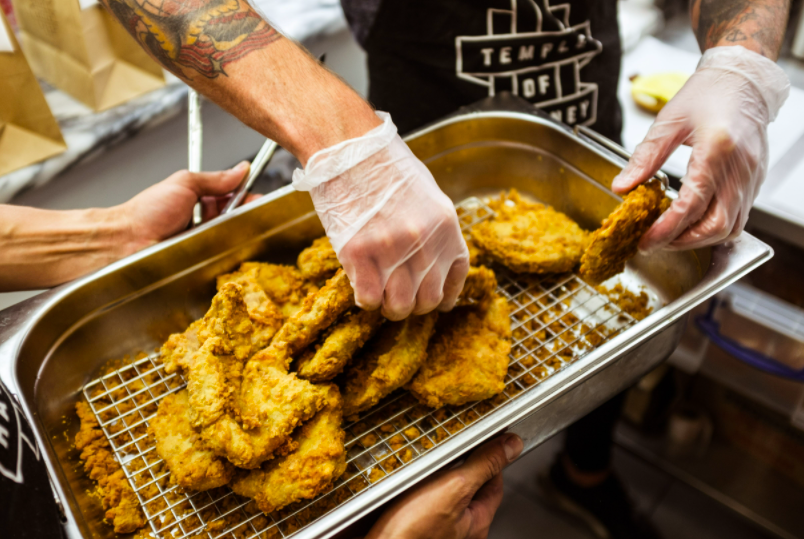 The restaurant is leading the charge for vegan fast food (Credit: Temple of Seitan)

One of the things that makes Temple of Seitan such an interesting case study is its client base.

While the restaurants are incredibly popular with the plant-based community, the food is also a hit with carnivorous fried chicken fans.

For O'Shea, this dual appeal is extremely important. As he puts it: "I don't think we're super concerned with targeting anyone in particular. We've got a really wide range of customers. The chicken shop is a great unifier."

"We get typical young vegans that you would see when you close your eyes and imagine a vegan," O'Shea laughs, "but then again, you also get much older people and families. We get a lot of tradies and builders popping in for lunch, which is just fantastic."

Discussing the origins of the restaurant, he reveals: "If you look back to the beginning, there were a lot of people coming to try our food, thinking that it would be super-food healthy stuff.

"They were quite shocked that it was in fact savoury and salty and greasy. We actually had to dial back some of the flavours in our coatings to cater to them a little bit!

"(But) we also had a lot of bemused meat-eaters who couldn't understand why were doing what we were doing. But when they tried it, it clicked for them that you could still have something that's as delicious as what they were used to eating."

O'Shea believes there are several reasons why fried chicken specifically might have this appeal. As he explains: "I think there's definitely a nostalgia and familiarity to it. It's something that people who go vegan who haven't always been vegan are very likely to have eaten.

"We're not trying to recreate some 'hyper-realistic' chicken substitute. What we're after is something that's delicious and triggers the right sort of memories in your brain."

By capturing the essence of classic comfort food, Temple of Seitan is ticking a major box for vegan sceptics. Providing the tastes and textures of fried chicken in a completely different form clearly has serious appeal for both vegan and non-vegan customers. 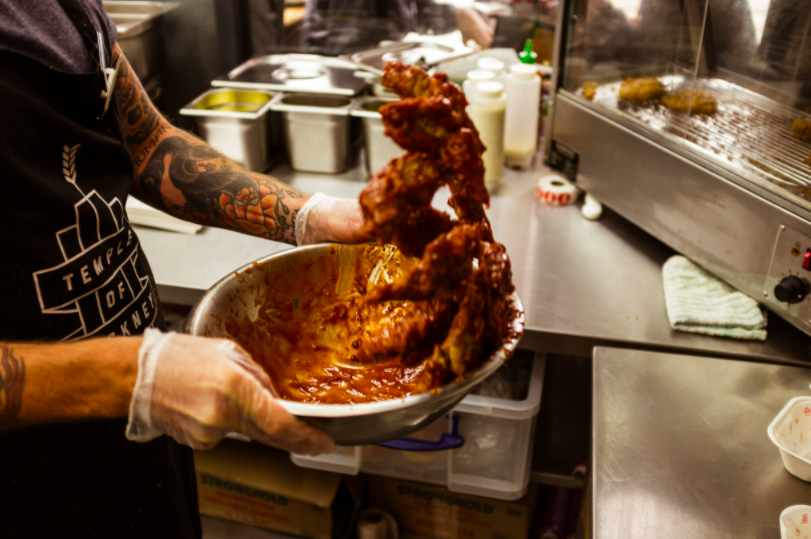 There are many reasons why meaty vegan options are so popular (Credit: Temple of Seitan)

Fried Chicken – a gateway to veganism

Temple of Seitan's USP is its status as the pre-eminent vegan fried chicken joint in London. However, it's clear that the kitchen's softly-softly approach to veganism is winning fans from across the food spectrum.

Aside from the restaurant's plant-based loyalists, the team often receive glowing feedback from pleasantly surprised meat-eaters. As O'Shea sees it, this is a great way to start a wider conversation about veganism in general.

He explains: "Bec (O'Shea's wife and business co-founder) particularly was quite a militant vegan in her youth – trying to preach to anyone and everyone about the virtues of veganism. But what she's found over time is that the message is a lot more effective when it comes from showing.

"So, being able to show someone who's currently eating meat that you don't have to miss out on a vegan diet (is) much more effective than the 'tut-tut' approach.

"We're all about being a very accessible place for people who are curious about veganism. We specifically try not to be preachy, we try not to be judgemental and we try and accept everyone who's coming in to give it a go. I think it's really important to lower the barrier of entry into veganism."

READ MORE: Everything you need to know about the vegan meat alternative seitan

The food served at Temple of Seitan does two things. First, it provides a nostalgic substitute for diners who may have left meat-eating behind, replacing some of their fondest food memories with a worthy alternative.

Secondly, however, the menu opens the door to sceptical meat-eaters, highlighting what's possible in a world without meat. This combination is clearly extremely powerful.

As the success of the restaurant proves, meaty vegan options can have a massive impact on our eating habits.