A freaky photo of what appears to be a man in a hospital bed is currently traumatising the internet.

The snap, which was originally shared by master baking illusionist The Bake King, is actually a sculpted depiction of the rapper Slowthai, made entirely out of cake.

The revelation that the figure is nothing more than sponge and icing has understandably freaked out fans. 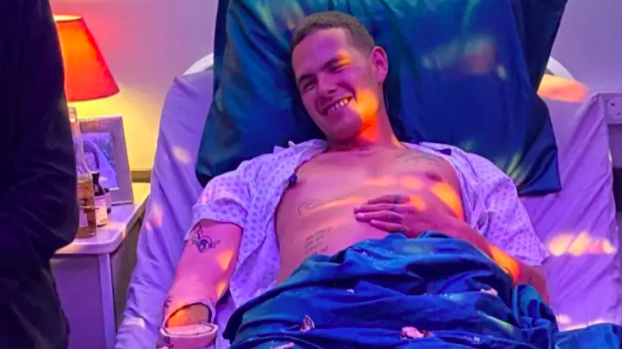 Fans are amazed by how lifelike the cake is (Credit: BakeKing/Twitter)

What makes the illusion so convincing is that it's so lifelike. At first glance, the cake really does look just like Slowthai, sitting in a neon-lit hospital smiling slightly maniacally.

It's only when you notice his sliced legs and arms that it becomes clear something is seriously wrong.

The man behind the cake, Ben Cullen - AKA the Bake King - has since revealed some of the methods behind the madness. In a caption underneath the original photo, he explained:

"Made for his music video 'Feel Away' - all his body parts were made from vanilla cake and chocolate ganache with sugarpaste details!"

Speaking exclusively to Twisted, Cullen went on to reveal:

"I made 2 legs 2 arms and a baby 😂 for the video. I’m still even unsure myself of the entire storyline but Slowthai is renowned for being massively artistic and creative with his work and music videos so it was a great fit for me."

Several other photos reveal unnerving close-ups of the sculpture's hands and feet. It's fair to say that the results are both spectacular and disturbing. 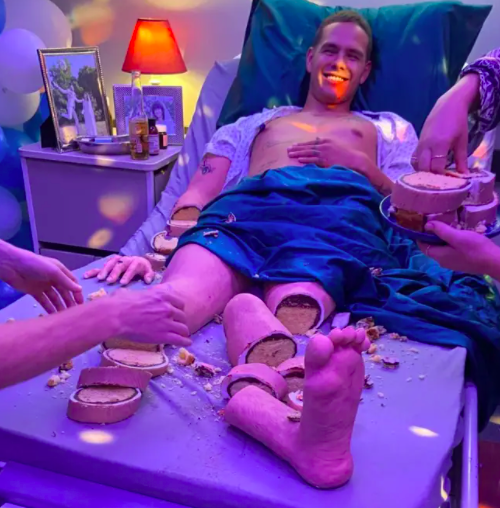 Eating the cake (Credit: The BakeKing/Instagram)

"This is amazing, but horrifying"

Understandably, the bizarre cake baffled, horrified and intrigued many internet users. Judging by the comments as the cake took over Twitter, the illusion is every bit as effective as Cullen would have wanted.

One startled commenter wrote, "that slowthai cake is gonna give me nightmares".

Another added, "this is amazing, but horrifying," while a third wondered, "Imagine walking past the oven and seeing the silhouette of a man baking.”

READ MORE: The Bernie Sanders chair meme gets turned into an incredible cake

Interestingly, the cake itself originally appeared in Slowthai's 2020 music video for 'Feel Away'. The song features as the debut track on his latest album 'Tyron', released this month.

During the surreal video, a heavily pregnant Slowthai arrives on a maternity ward, before hospital staff proceed to eat him. Given this context, perhaps a man made out of cake is the least shocking thing about the song.