Especially now, fantasising about the best places to visit for food can feel needlessly masochistic. After all, what's the point of torturing yourself over nasi lemak and tapas if you can't even get on a plane?

However, we'd argue that it's precisely because we're stuck that we should remind ourselves of all the exciting things that are out there waiting for us. Once we've finally returned to normal, it's worth knowing that we will have a delicious itinerary to help us celebrate.

The best places to visit for food

Every food lover knows that your choice of holiday destination can be the difference between ecstatic escape and distressing disaster. Sky-high expectations can lead to soul-crushing disappointment, as well as rumbling tummies.

However, there is a way you can avert potential catastrophe and safely sample the best that world cuisine has to offer.

Read More: Where to find the best pizza in New York

For anyone who has spent lockdown dreaming of anything other than endless Domino's pizza, these 11 destinations are certain to whet your appetite. Here are the 11 best places to visit for food on the planet. 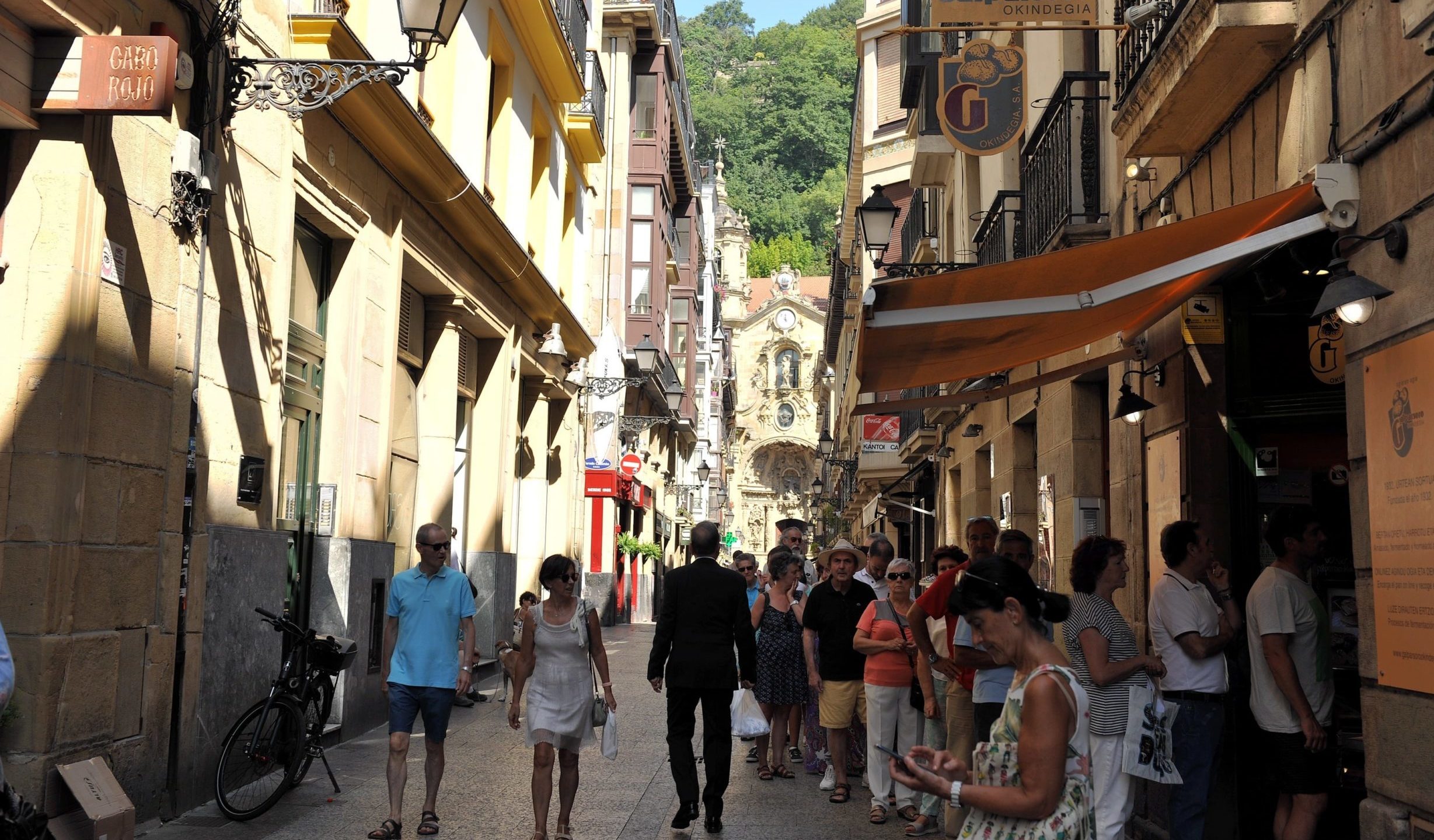 San Sebastian is one of the best places to visit for food - Credit: PA

Northern Spain is a Mecca for foodie innovation and invention. Chefs here have long been pioneering new techniques and redefining the fine dining experience, and San Sebastian is at the forefront.

However, it’s not just the dazzle of the Michelin stars that make San Sebastian such a stellar destination. The real highlight, especially for those that may be working with a slightly tighter budget, are the hundreds of pintxos stalls scattered across the city.

“Pintxos” are the region’s version of tapas and ensure that San Sebastian’s street food is just as exceptional as its headline-grabbing restaurants.

Tokyo can truly claim to be the definitive fine dining capital of the world. The city hosts more than a whopping 225 restaurants with at least one Michelin star, in addition to institutions like the three-starred Usuki Fugu Yamadaya, which specializes in serving the potentially deadly fugu pufferfish.

However, Tokyo is not just a sushi paradise. The dizzying variety on offer in the city is what makes Japan’s capital a truly top foodie destination, with myriad understated local restaurants as well as imposing modern monoliths catering for every palate.

Everything, from exceptional pizza to top-notch barbecue, is on the menu. For sheer variety, Tokyo's tough to beat.

For a long time, British food was, perhaps deservedly, the butt of every cooking joke going. Small wonder, since it took us until the 1970s to go anywhere near a garlic bulb.

However, the British food scene has now altered beyond recognition, and London is the centre of a culinary revolution. The hugely positive influence of immigration and integration is obvious from even the briefest of examinations of the patchwork that makes up the city.

Many distinct areas boast their own unique cultural heritage and have given rise to innumerable modern takes on classic tropes. From the curry houses of Brick Lane to the kebab shops of the North East, every tradition has left its fingerprints on the city.

With world-class dining destinations as well as street food pop-ups on offer, London is now drightly regarded as one of the best places to visit for food in the world.

New York City's cultural melting pot has helped create some truly extraordinary food. The hustle and bustle of the Big Apple has led to an incredibly proactive fine dining scene that can be considered to be at the forefront of trendsetting across the foodie-verse.

However, for the average tourist, it won’t be the glamour of cutting edge kitchens that proves the biggest draw. It’s the institutions like Katz’s Deli on the Lower East Side that have become destinations in their own right.

Whether you’re walking through Chinatown or Little Italy, New York is chock full of revered restaurants that have satisfied locals and travellers alike for decades. Pull on your hiking boots and tuck in!

This small, Southeast Asian nation is probably the world capital of street food. While Singapore boasts some exceptional individual restaurants, the real reasons to come here are the food courts.

“Hawkers”, as they are known locally, are a national treasure and are the place to head for an exceptionally reasonable, top quality dinner.

The Hawker stalls are down to earth, relaxed and offer more dynamic dining than anywhere else on this list. Each individual stall will offer their own take on a range of Singaporean staples, including satay, laksa, chilli crab and pork rib tea.

With literally thousands of different stands to try, Singapore is the perfect place to totally immerse yourself in food.

It might have taken too long for Peruvian cooking to earn the reputation it deserves, but there can be little doubt that this South American slice of foodie heaven can cook with the best of them.

Being a coastal city, Lima is rightly famed for its seafood, and in particular for its ceviche - a method of “cooking” fish and shellfish in citrus juice.

Not only does the city offer exceptional value for tourists (some street stands provide three-course menus for as little as $3), but it is also home to three of the best restaurants in the world. In fact, all three of them happen to be within a 20-minute drive of one another.

For a taste of the unknown, there is no better holiday.

No list of foodie holiday destinations would be complete without Paris. The spiritual home of fine dining and the grand French gastronomic experience, the city is steeped in cooking culture.

Boasting five restaurants in the world’s top 50, it’s easy to see why Paris is still considered by many to be the pinnacle of world food.

There's no doubt that formal haute-cuisine has helped the city to earn its reputation. However, it is actually the multitude of relaxed cafes and wine bars that give Paris its flavour.

While Paris might not be the ideal destination for the budget traveller, it is possible to have an exceptional foodie experience without breaking the bank. The City of Lights caters for every taste.

Much like Singapore, Malaysia has a proud streetfood heritage. Even though every city is home to hundreds of incredible food courts and street carts, Georgetown in Penang is probably the pick of the bunch.

A wealth of different cultures call this small town home, ranging from China to India and beyond. Georgetown's famous night markets are the perfect place to take your tastebuds on tour without moving more than a few hundred metres. It's paradise.

Coupled with a unique and fascinating cultural history, Penang is a must-visit for anyone travelling to South East Asia.

To say Emilia Romagna is the best place to eat in Italy is like calling "The Two Towers" the best Lord of The Rings film - obviously, it's all awesome. Nevertheless, the region and its crown jewel, Bologna, stands head and shoulders above the rest.

Aside from the infamous Bolognese ragu (which you will never, ever find served with spaghetti), the city is celebrated for its stuffed pastas, incredible hams and unbeatable cheeses. If you want to enjoy Italy at its finest, Bologna's the place to be.

Given India's enormous size, deciding on a destination that encapsulates everything that's incredible about its cooking is always going to be difficult. Thankfully, Delhi does just that.

The nation's capital is a hotbed of high-quality cooking, including unmarked streetfood as well as top-end restaurants.

The city is home to many beloved Indian dishes, including butter chicken and aloo tikki. For an introduction to India that you'll never forget, head to Delhi.

Serving up a fascinating combination of tradition and modernity, Seoul is fast becoming the essential Asian food city.

In addition to iconic experiences like Korean barbecue and fried chicken, the city is also home to many pioneering kitchens. Where else in the world can you enjoy a modern take on centuries-old Buddhist temple cooking?

The frustration of a foodie holiday is that you cannot experience all a city has to offer in one visit. The great thing about these destinations is that they require repeat viewing.

Whatever happens after the pandemic the best places to visit for food will still be there to help us through.