How are McDonald's chicken McNuggets made? Why the Among Us nugget really is one of a kind

There was a time when asking how are chicken McNuggets made would result in a mix of titters and wretching. As anyone who grew up in the nineties knows, rumours of pink slime and chicken beaks have done no favours for the dish's image.

However, the truth is that chicken McNuggets are carefully and precisely engineered to deliver consistency across the board. While this confirms that there's no pink slime involved, it also means that one of the biggest fast food stories of the year is even more bizarre than it seems. 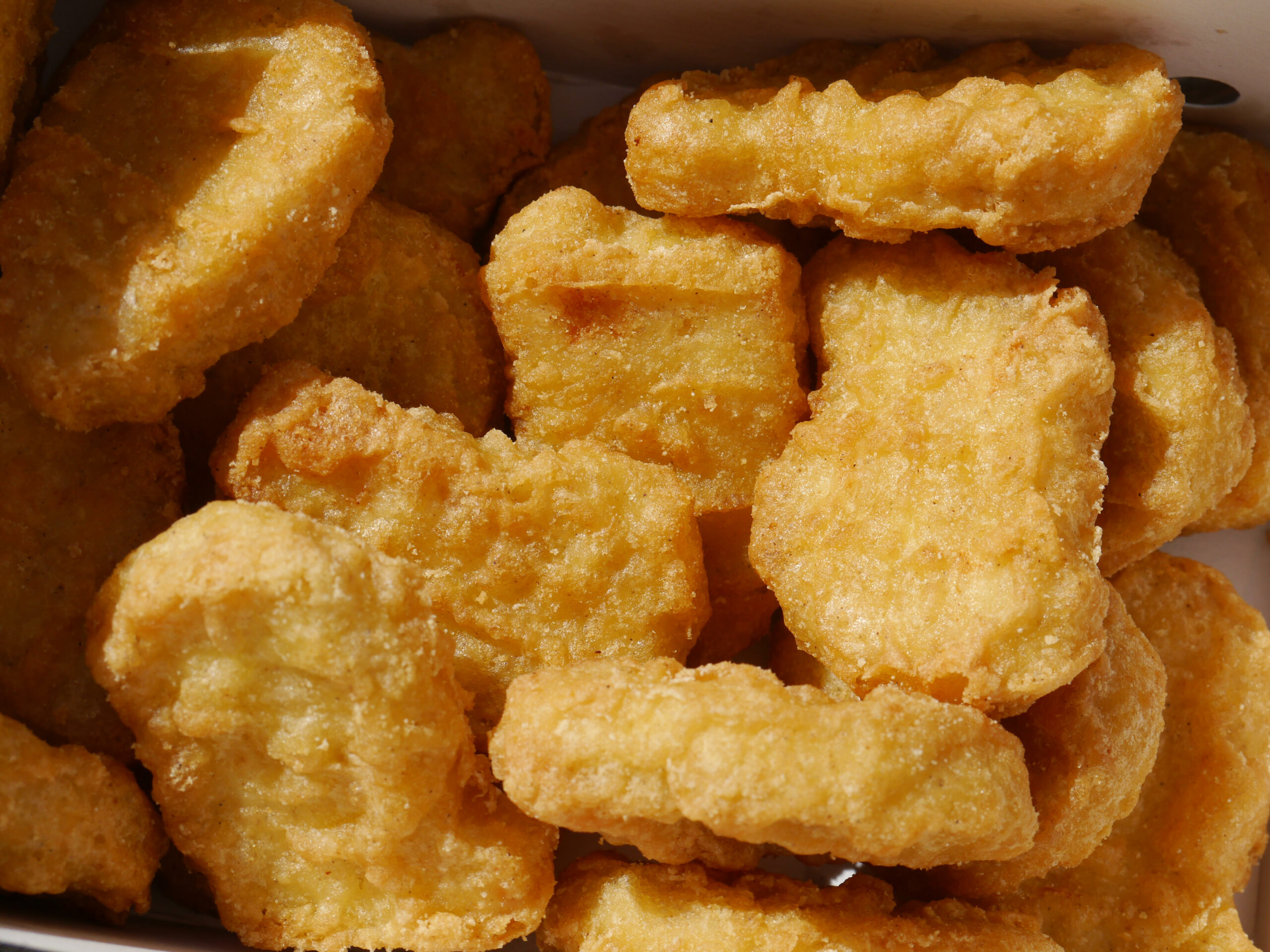 Chicken McNuggets are a mystery to many people (Credit: Alamy/simon evans)

How are McDonald's chicken McNuggets made?

In all honesty, the way McDonald's chicken McNuggets are made really is a marvel of mass industrialisation in the food industry.

Like many things on the McDonald's menu, workers don't make chicken McNuggets at the restaurant. Instead, separate members of the Maccies team assemble them off-site, before shipping them to franchises across the country.

To start with, a team of workers carefully portion whole chicken carcasses along a production line. The crew separate the breasts, a small piece of rib meat and skin. As a manager confirms, these are the only parts of a chicken that go into a McNugget.

Next, the the meat is grinder down so that it can be easily shaped. The mix is then marinaded in a delicious combination of salt, natural flavouring and dextrose, among other things.

After seasoning, the nuggets finally take shape. A special machine forms the mixture into one of four unique shapes – the ball, the bell, the boot and the bow tie.

A 2016 promotional video, released as the business made subtle changes to the McNugget formula, explained the process in detail.

The clip, recorded at the Tyson Complex in Tennessee, not only highlights the lack of pink slime involved but also how labour intensive making a McNugget actually is. 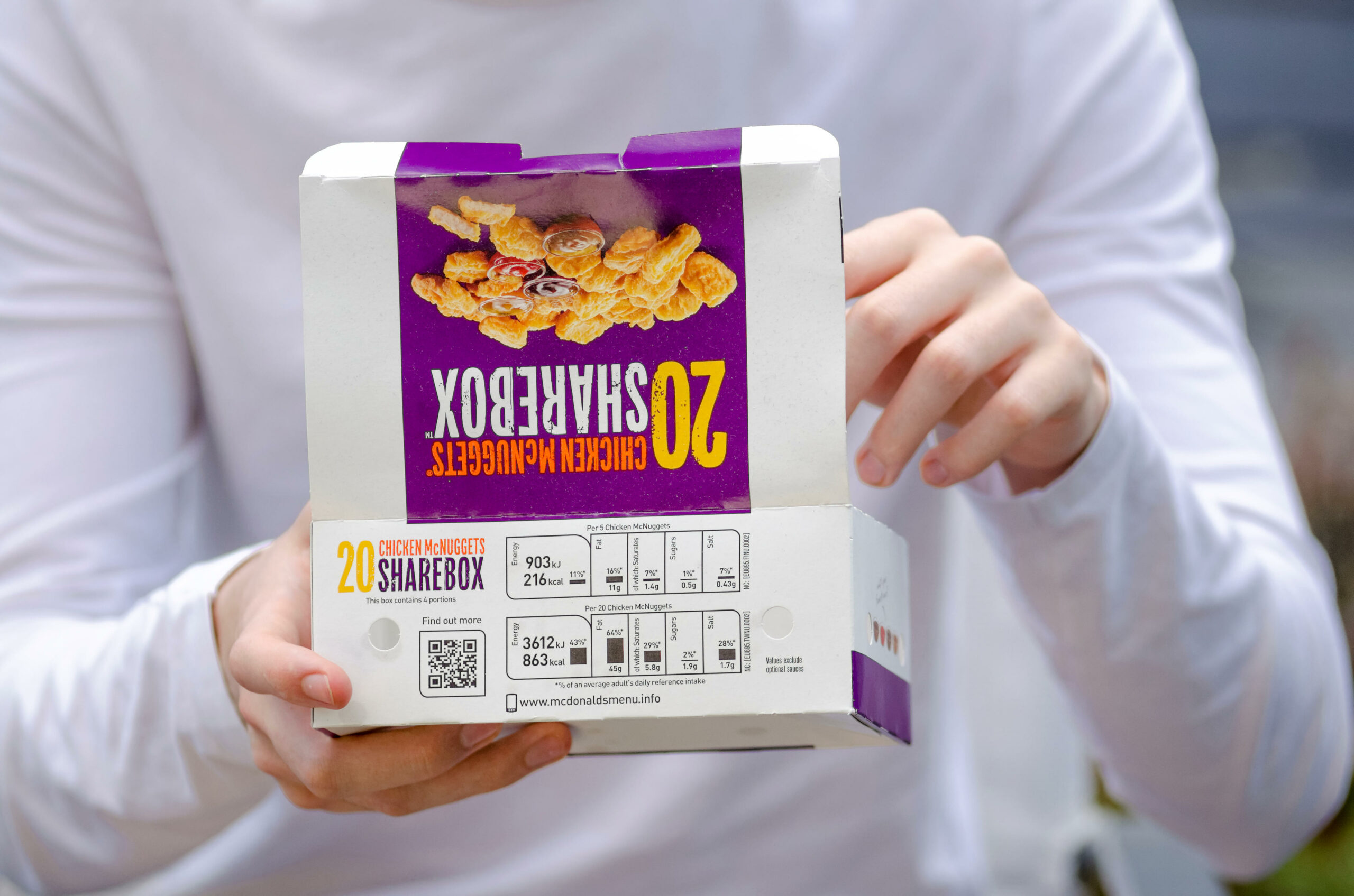 What is a McDonald's chicken McNugget actually made of?

McDonald's chicken McNuggets are made from 100% chicer great meat – which makes up 45% of the ingredient.

The other ingredients are the batter, seasoning and pool in which they are cooked in.

According to the Golden Arches website, a portion of chicken McNuggets is 259 calories, 13 grams of fat and 0.51 grams of salt.

You may have noticed when tucking in to your order that the McNuggets come in different shapes – four to be exact.

According to McDonald's, the reasoning behind this is to ensure consistent cooking times for food safety. However, as per a 2014 Insider article, the company also claims, "...Chicken McNuggets are shaped uniquely for kids and kids at heart  — it makes dipping more fun!"

Either way, if all goes according to plan, the facility batters and then pre-cooks the nuggets, before the journey to McDonald's restaurants across the country.

Given the precision involved, this process should ensure absolute consistency across the board. However, as the world discovered last week, sometimes something slips through the cracks.

The original eBay listing for the Among Us McNugget (Credit: eBay)

Why the Among Us McNugget was so special

The world seemed to descend into chaos last week when, out of nowhere, someone bought a McNugget for $100,000.

After a ferocious bidding war, which lasted well over a week, Utah-based vendor polizna netted an astonishing $99,997 for his bit of battered chicken. On the surface, this investment seems ludicrous.

What prompted the intense competition was the nugget's unique shape. Unlike most McNuggets, polizna's prize seemed to have two sprouting legs, making it look like a character from the popular video game Among Us.

To the untrained eye, this appearance might not seem all that remarkable. However, as we now know, McNuggets are should only appear in four distinct shapes.

This makes the Among Us McNugget truly one of a kind.

READ MORE: When is McDonald's Monopoly returning in 2021?

As yet, there has been no explanation for the bizarre nugget. The fact that it was part of a limited time only BTS meal should not have affected its shape so drastically. McDonald's itself has been noticeably silent on the issue.

Whether this makes the McNugget worth $100,000 is another question entirely. However, it does go some way to explaining why someone believes one nug is worth the same a small house in Liverpool.